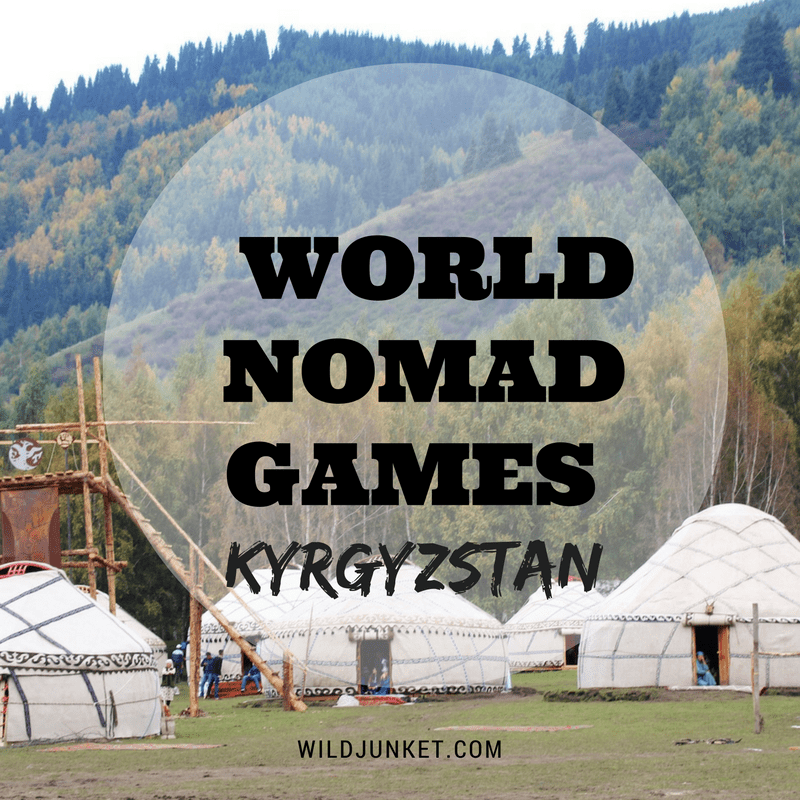 A Guide to the World Nomad Games

Over 300 yurts have been set up on the Kyrchyn jailoo. They’ve created a temporary town on a vast green pasture surrounded by the imposing Ala-Too Mountains. More than 1,200 people from 62 countries have come to Kyrgyzstan to participate in traditional sports. These include horseback archery, stick wrestling, and dog hunting as well as showcase nomadic culture in the form of costumes, food, song and dance.

This is the World Nomad Games — a six-day event (in September every 2 years) held in celebration of the nomadic heritage of the Central Asian nations in the form of sports and cultural displays. I’ve come to Kyrgyzstan to attend the second World Nomad Games — and it’s absolutely blown my mind. 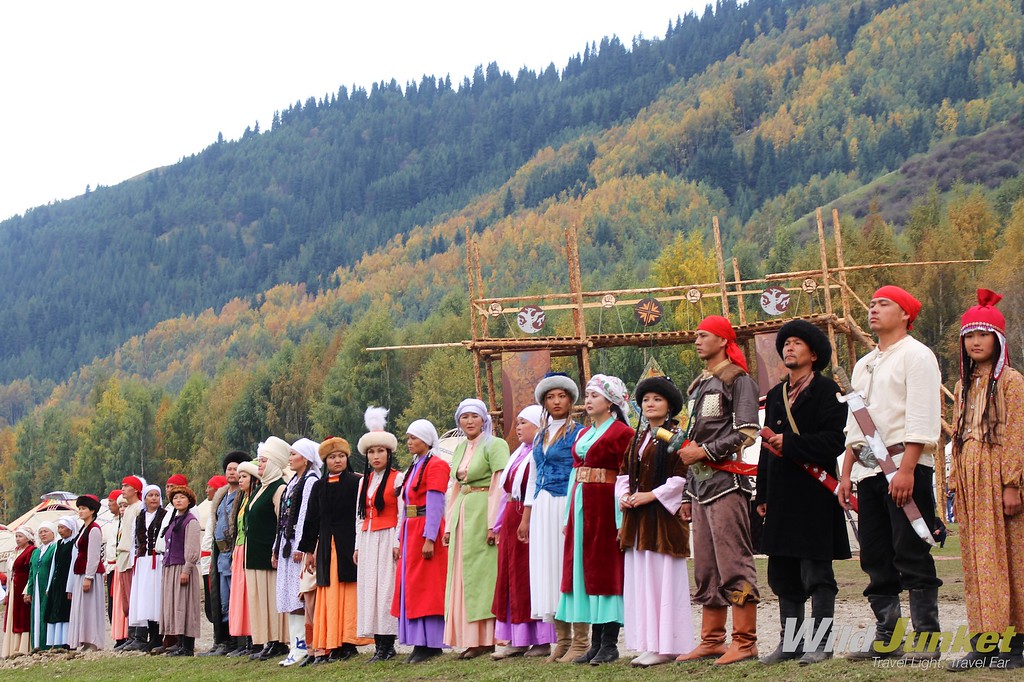 What are the World Nomad Games?

The World Nomad Games have often been described as the Olympics for nomads, with a focus on Central Asian traditional sports that you’ve probably never heard of: Er enish (horseback wrestling), Toguz korgool (an intellectual board game) and – the Central Asia’s favorite – Kok-boru (polo using a headless goat carcass).

But the World Nomad Games isn’t all about the sports — it’s also about the Central Asian culture. At the Kyrchyn ethno village, Kyrgyz people from different regions in the country put up performances of traditional song and dance. They display their costumes and artwork with pride. Other ethnic sports like eagle and dog hunting as well as archery are held on the green fields here.

“No words can express how proud I am of our Kyrgyz culture, being here at the World Nomad Games.” Murat, a falcon hunter in his fifties, shared with me as he stood beaming in a kalpak hat and embroidered coat. 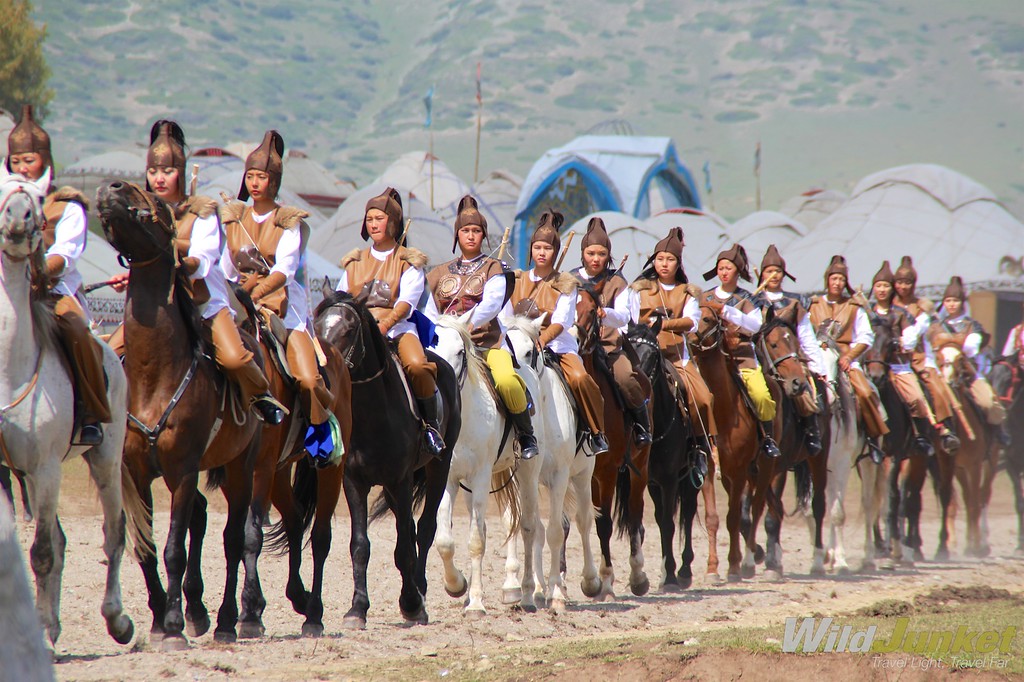 President Almazbek Atambaev proposed the idea of the first Nomad Games in 2014. The aim was to unify and preserve the nomadic historical heritage.

The nomadic culture is unique and historically rich. It’s prominent not just in Kyrgyzstan but all over Central Asia, Mongolia and the autonomous regions of Russia. Nomads have lived the traditional lifestyle for centuries, but modernisation is sadly diluting their rich culture. It therefore makes it all the more important to preserve such a rare and original culture.

“This is the main idea of the Nomad Games, the idea of bringing together people and cultures. For us nomads, this is a celebration of returning to our roots. It’s an opportunity to show our children and the whole world the richness of nomadic culture.” Kyrgyz president Almazbek Atambayev said at the opening ceremony of this year’s games. 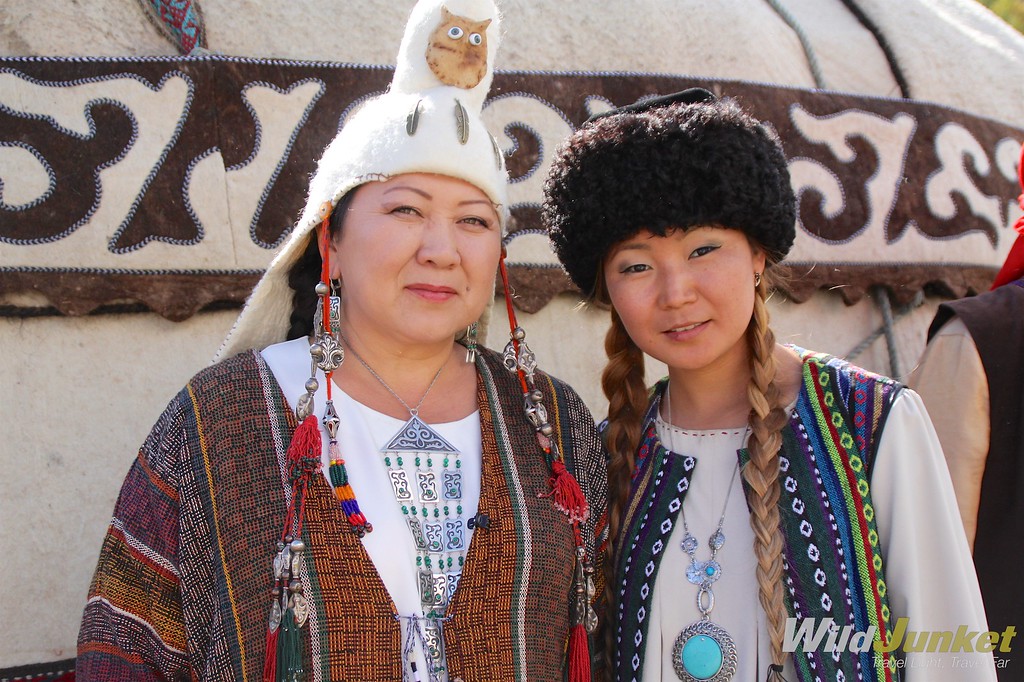 “For the audience members, this is a way to learn something new, to touch pristine nature, to see the hospitality and honesty of nomads. That’s why not only sporting events are included in the program, but also there are also ways to become familiar with the ways of life, traditions, art and philosophy of nomads.”

This year’s games are even larger and grander in scale, with double the number of countries participating. A brand new 10,000-seat Hippodrome has also been built in Cholpon-Ata.  It’s right on the shore of the stunning Issyk Kul Lake, a four hours’ drive from Kyrgyzstan’s capital, Bishkek. 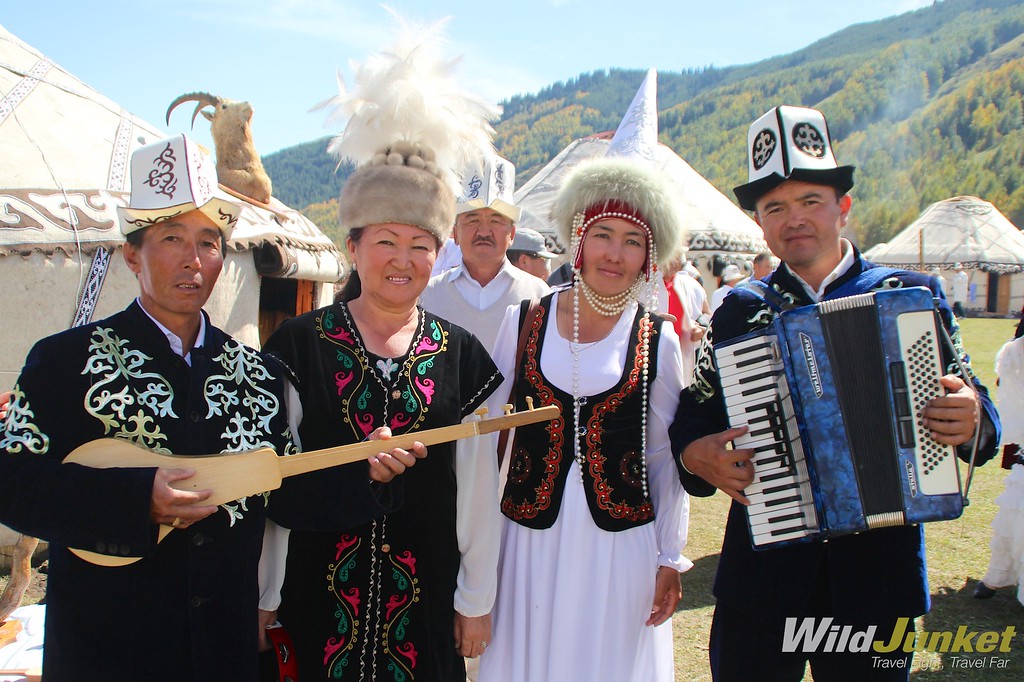 The Opening Ceremony at Hippodrome

The World Nomad Games 2016 kicked off with an extravagant opening ceremony at the Hippodrome on Saturday night, 3 September. It was my first time at an event of this magnitude and I was just blown away by the sheer scale of it all.

Akin to the opening ceremonies at the Olympics, this was a grand affair. It featured hundreds of whirling women, flute-playing children, and flamed horsemen galloping on horses.

Psychedelic light shows, acrobatic performances and choreographed dancings made it all the more impressive. Even American actor Steven Seagal made an appearance in an ancient Kyrgyz warrior armour. He was a guest of honor of the World Nomad Games.

READ NOW
Traveling South Kyrgyzstan — What to See and Do 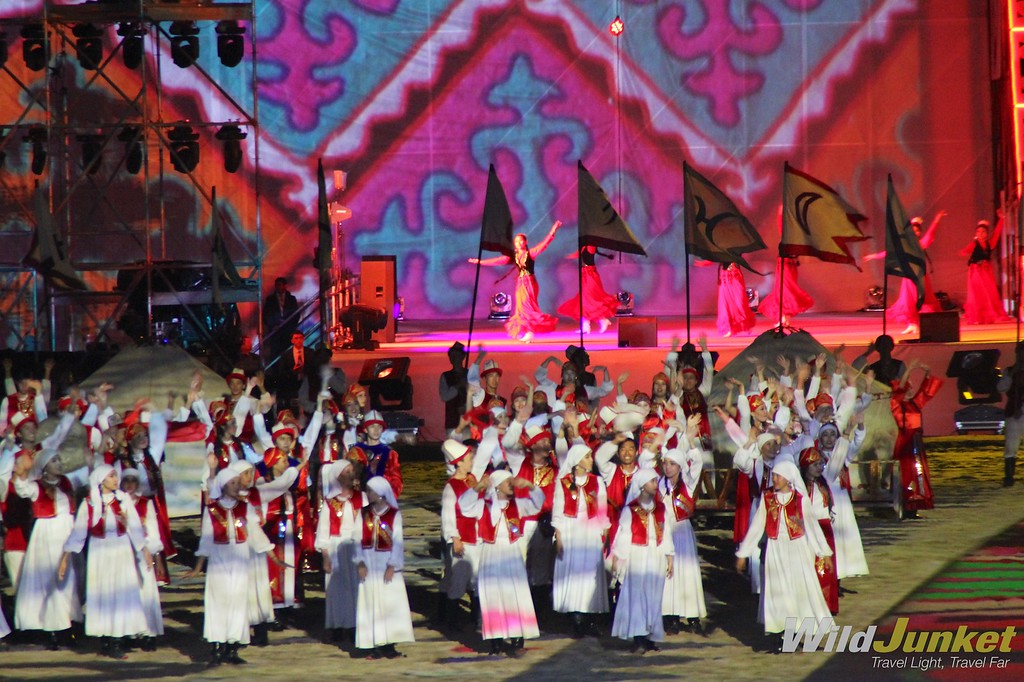 The Philosophy Behind World Nomad Games

A red carpet was rolled out for the arrival of Kyrgyz president Almazbek Atambayev, who conveyed a strong message with his speech. ““In the modern world, people are forgetting their history, and there is a threat of extinction for traditional cultures. Nomadic civilisation is an example of sustainable development, which is what all of humanity is looking for today.”

At the end of the night, teams from 62 nations made their appearance. The biggest teams were from India and Kazakhstan, and one-man teams hailing from Botswana, Democratic Republic of Congo and Zimbabwe. As the ceremony drew to a close, spectacular fireworks lit up the sky in different colors. Excitement was injected into the air. 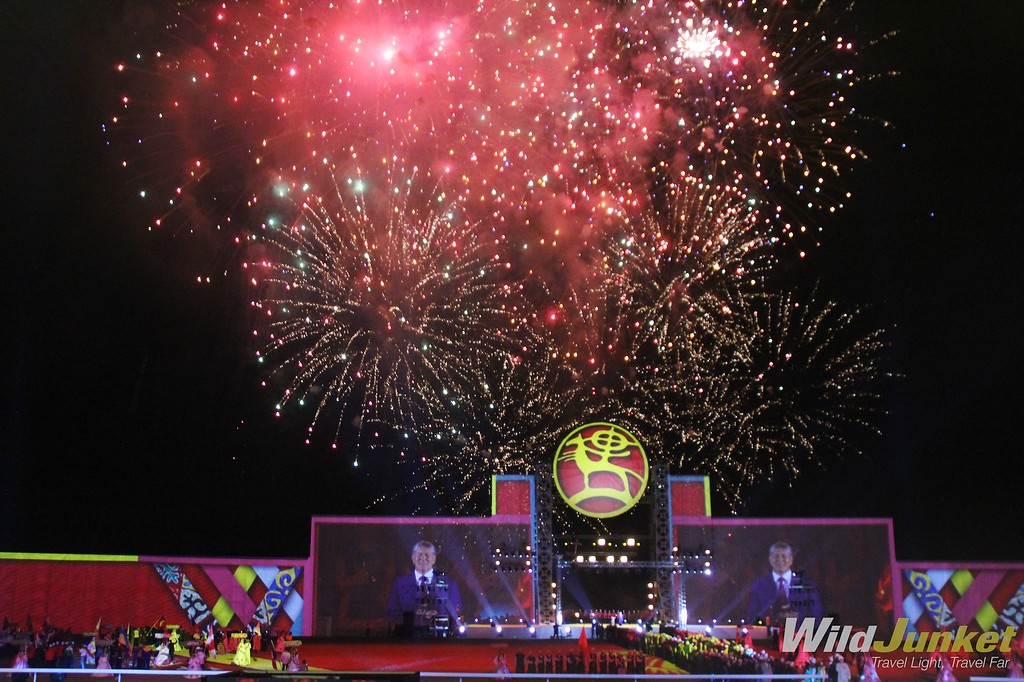 The sporting games and cultural events began the next day, 4 September. The Hippodrome was  the site of various horse-related sports events. These included Er enish (horseback wrestling), At chaysh (long-distance horse racing), and Cirit (horseback javelin).

But the star of the show was definitely Kok-boru. This is a fiercely-competitive Central Asian form of polo in which two teams battle for a headless goat/sheep carcass. Also known as Buzkashi, the sport is played widely in the region, including Pakistan, Afghanistan, Kazakhstan, Uzbekistan, Turkmenistan and China.

Playing polo with a headless goat may sound violent. It is though a sport with hundreds years of history and layers of culture behind it. 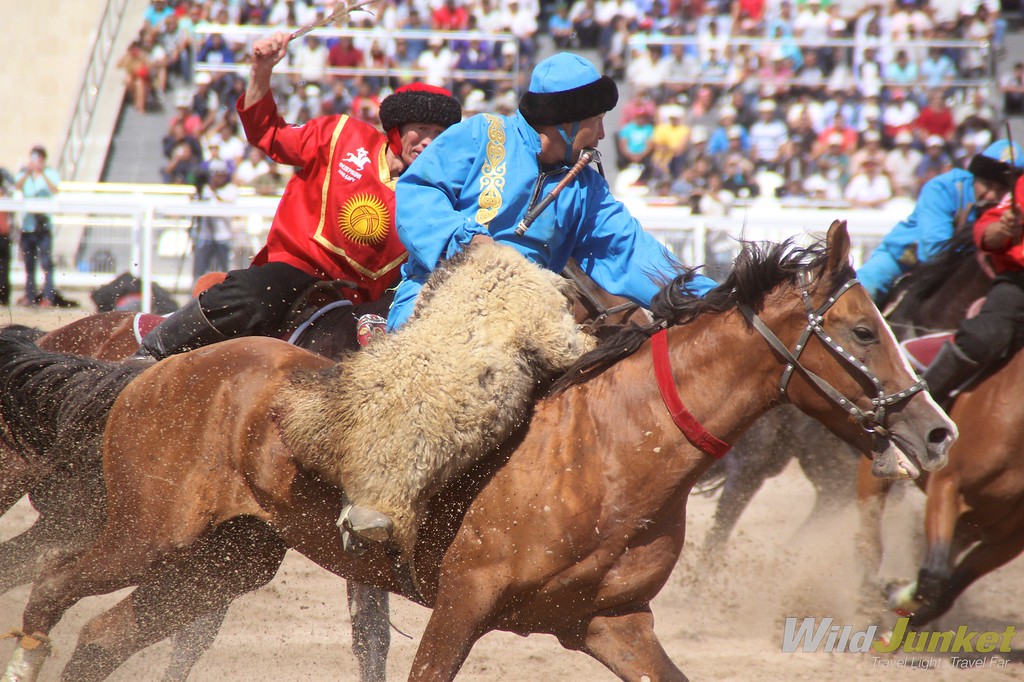 Highlight of the Games: Kok-Boru

Players first manoeuver their horses in order to gain possession of the goat/sheep, and then swoop down to the ground to grab a leg and pull it up. This is harder than it looks (a carcass can weigh up to 150 pounds).

The goat is tugged back and forth until a player grabs hold of it, races towards the goal and dunks the goat in to score. At the end of the game, the goat/sheep is  offered as a prize and feasted upon by the winning team.

At the 2016 Games, the most anticipated event was the final match of kok boru between Kyrgyzstan and Kazakhstan. The Hippodrome was completely filled, flags were waving and spirits were running high. It was a battle of the finest and both teams gave it their all. I felt so privileged to be there and see Kyrgyzstan clinch the title and win the trophy. 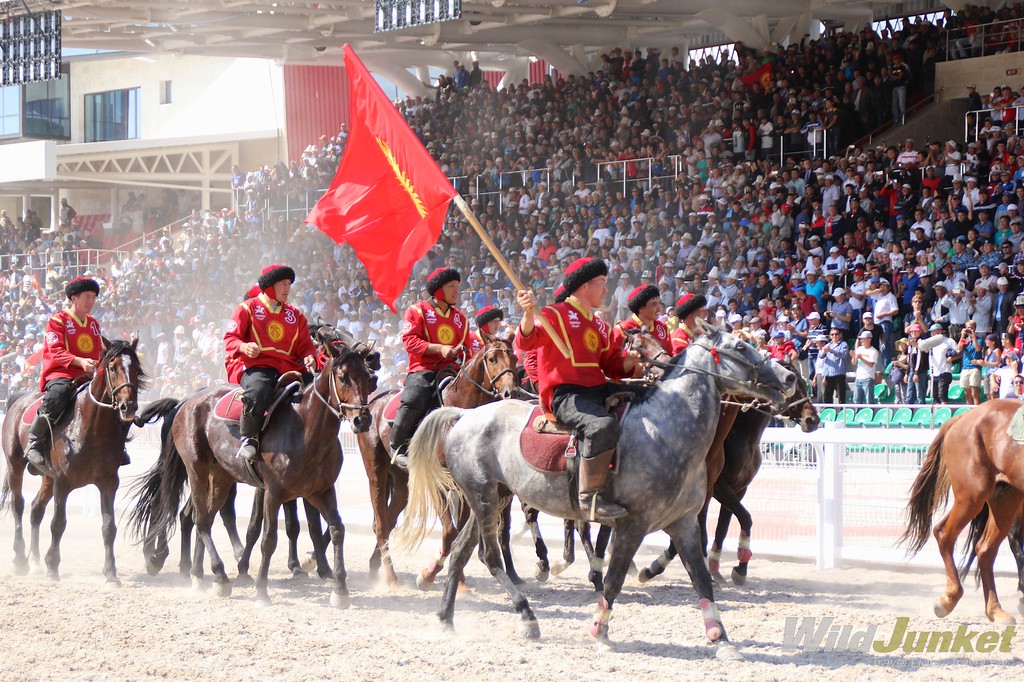 Wrestling and Board Games

The Gazprom Sports and Recreation Centre next to the Hippodrome was another venue for indoor sports. These include Alysh wrestling, Kyrgyz kuresh, Goresh (basically different kinds of wrestling).

It was quite interesting watching Mas-wrestling (where wrestlers fight for a stick). There were surprisingly very few women competitors at the games. So I was pretty stoked to see female Alysh wrestling matches (wrestling by grabbing on to opponents’ belt).

Over at the Soviet-style Aurora Sanatorium, a series of intellectual games were also held to test the wits of the participants in a different manner. Traditional nomad board games like Toguz korgool (using sheep droppings to play in the nine wells) and Mangala (playing 48 stones in 6 wells) were played there.

READ NOW
Best Things to Do in Issyk Kul, Kyrgyzstan 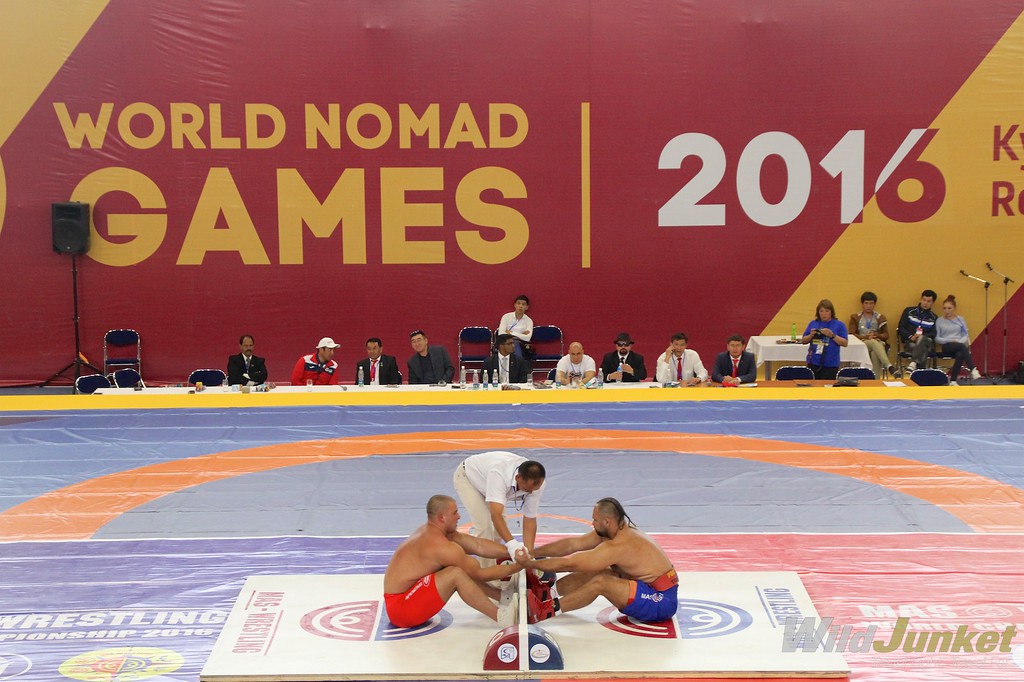 On the Kyrchyn jailoo, an hour’s drive from the Hippodrome, I found a very different side to the World Nomad Games.

In the picture-perfect Kyrchyn Gorge, a grand ethno-village was temporarily set up. It consists of nine settlements representing the seven regions of the Kyrgyzstan plus the two biggest cities, Bishkek and Osh.

People from all over the country came in their finest traditional wear to display their nomadic culture and showcase their art work, song and dance. A few traditional games like Salbuurun (eagle hunting), dog hunting (using the special Taigan dog species to hunt) and archery were also held here. 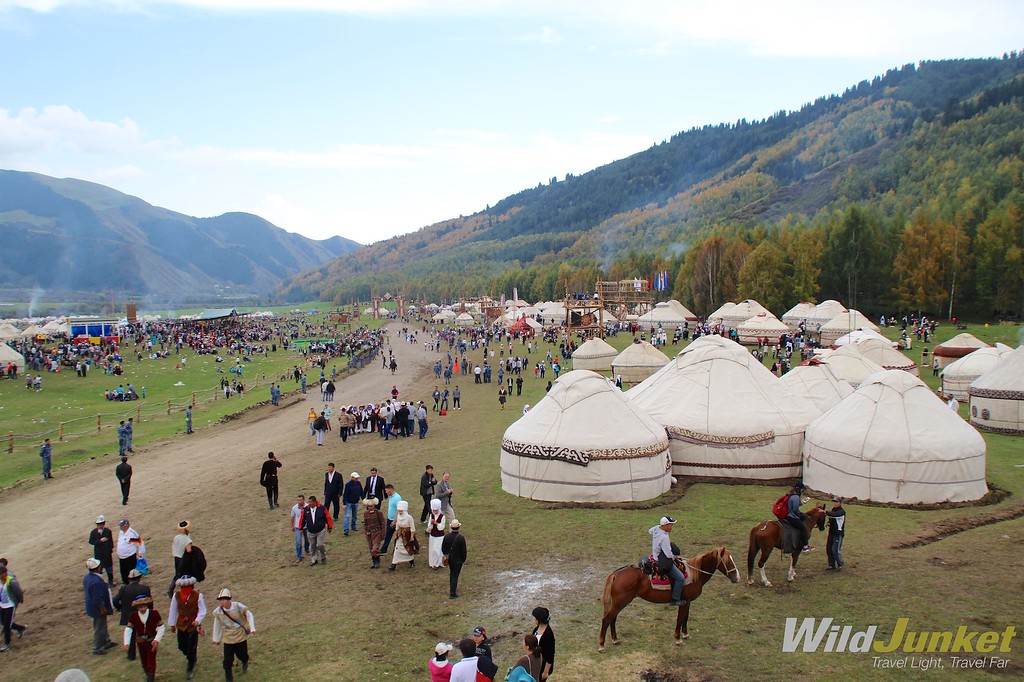 Personally for me, the Kyrchyn ethno village was the highlight of the World Nomad Games. The vibrant display of traditional costumes, handicraft, and traditional dances was such an eye-opening and culturally-immersive experience.

Amidst the yurts, bamboo platforms and cultural shows, it almost felt like I was walking back in time to the olden days of Kyrgyzstan.

And the settling was just spectacular — beautiful green pasture ran for miles on the elevated valley enveloped by snow-peaked mountains. Everywhere you looked, there were rugged slopes and towering peaks, giving a real sense of Kyrgyzstan’s backcountry. 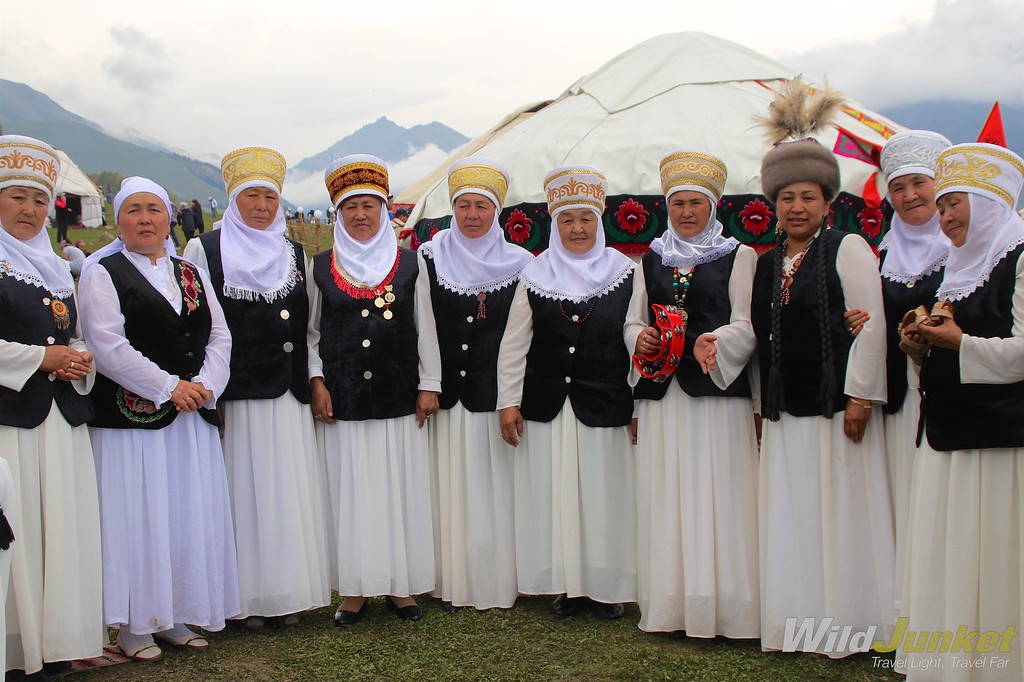 I lost count of the number of times people invited me into their yurts to share stories with me and feed me with delicious local sweets and naan bread.

I had so many meaningful conversations with interesting characters, like Zura from the Naryn province who inspired me with her strength and wisdom, and Murat from Kochkor who’s continuing his family’s traditions in eagle hunting, and the two ladies Benoka and Alima who had traveled for days to get here from Alay Mountains and generously gave me presents not expecting anything in return. 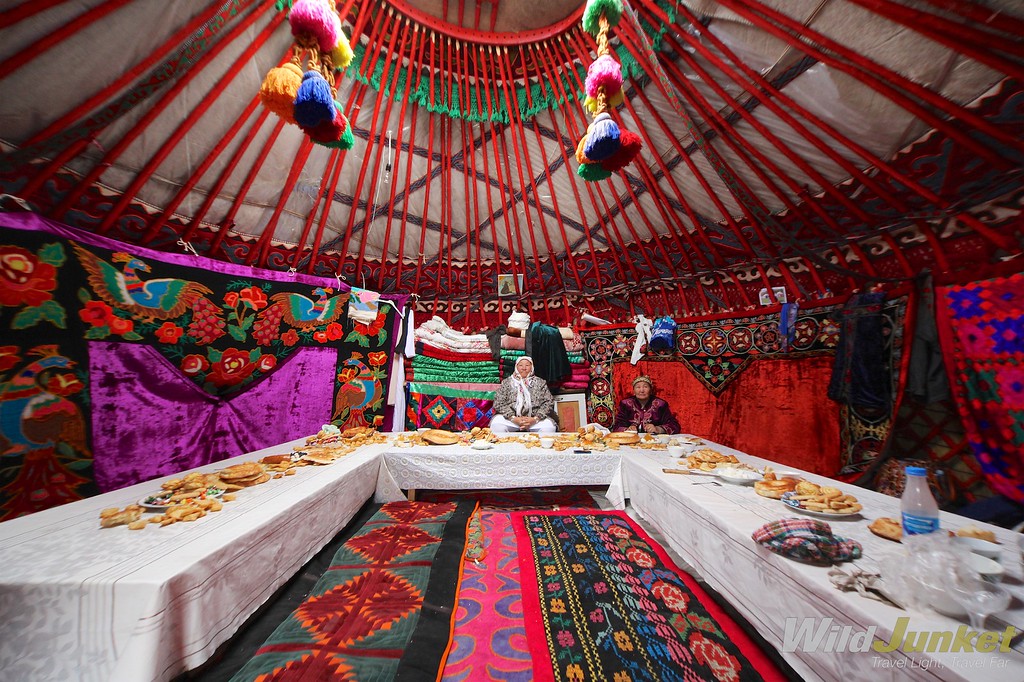 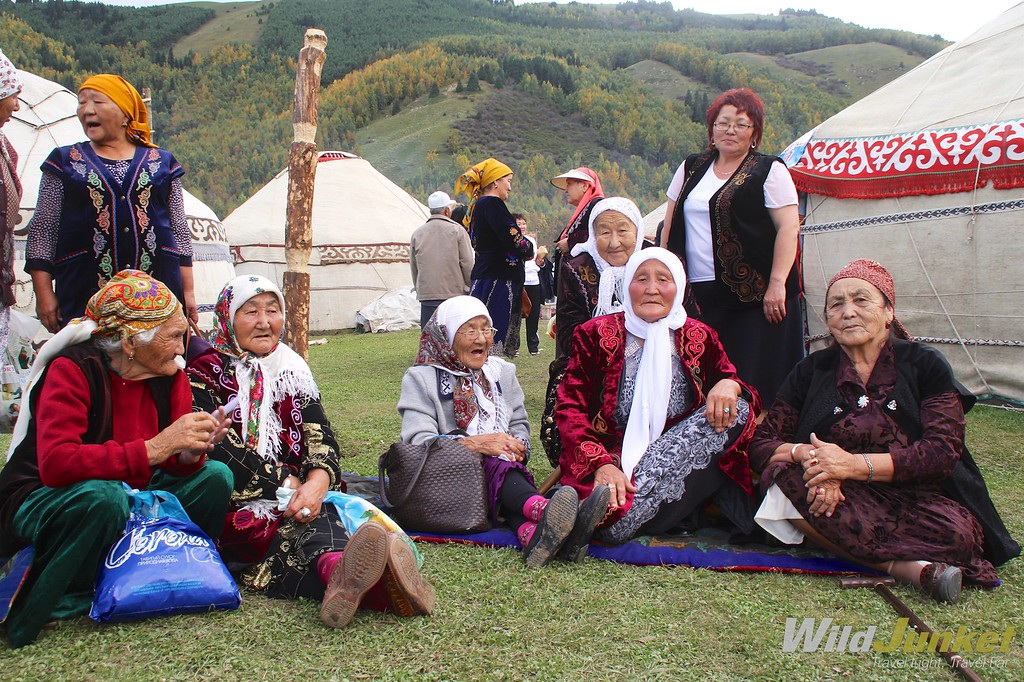 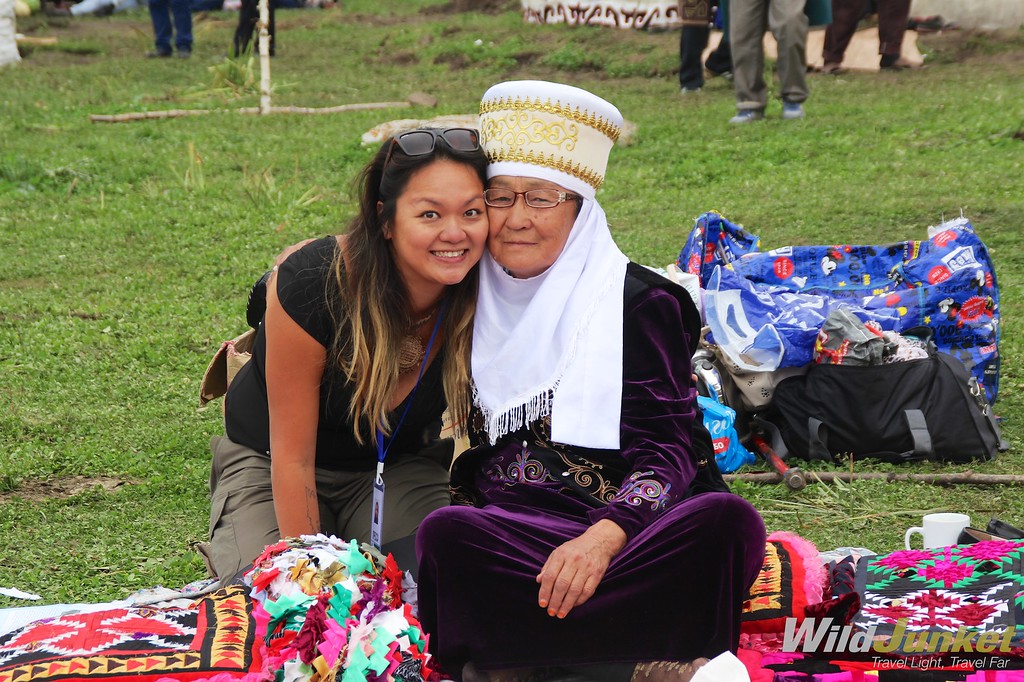 Why Go to the World Nomad Games?

It’s encounters like these that made the Kyrchyn ethno village such a special experience for me. Despite spending almost three months in Central Asia on my previous trip, I felt like I’d never really gotten to experience and learn about local culture as much as I did here.

For those planning to travel Central Asia, I highly recommend coinciding your trip with the next World Nomad Games. There’s really no other event in Central Asia that lets you experience the nomadic culture and interact with locals on this kind of level and scale.

Tips for the World Nomad Games

The World Nomad Games is a huge event, akin to the nomad’s Olympics. You’ll need to book your accommodation and plan your trip in advance to make sure you make the most out of it. Here are some of my personal tips to help you in plan your trip.

If it is your first trip to Central Asia, keep in mind that this part of the world is still developing and the event might not be as organized as you would expect it to be. Keep a flexible schedule and an open mind and you’ll have the time of your life!

Disclaimer: My trip was organized in cooperation with Discover Kyrgyzstan, and made possible by the support of the American people through the United States Agency for International Development (USAID). The contents are the sole responsibility of the author and do not necessarily reflect the views of USAID or the United States Government.” All opinions expressed above are my own.