Best Things to Do in Issyk Kul, Kyrgyzstan

Wispy clouds hang low over the choppy dark indigo waters as the howling winds create ripples on the water surface. Backdropped by tall and mighty Tien Shan mountains, the water stretches into the horizon, far beyond where the eye can see. If I didn’t know better, I would have thought this was a sea. But this is Lake Issyk Kul, the second largest mountain lake in the world.

Located in the heart of Kyrgyzstan, the lake stands at an altitude of 5,272 ft and stretches over an area of 2,408 square miles, covering more ground than some countries. Translated to mean “warm lake”, Issyk Kul may be surrounded by snow-peaked mountains, but it never freezes — not even in the harsh Central Asian winters.

Lake Issyk Kul is the one of the most popular destinations in Kyrgyzstan for several reasons. The yurt camps by the lake draw in hordes of Kazakh and Russian tourists with its relaxing setting and therapeutic waters; while the hiking routes further inland offer some of the finest trekking territory in Central Asia and draw in travelers from all over the world. 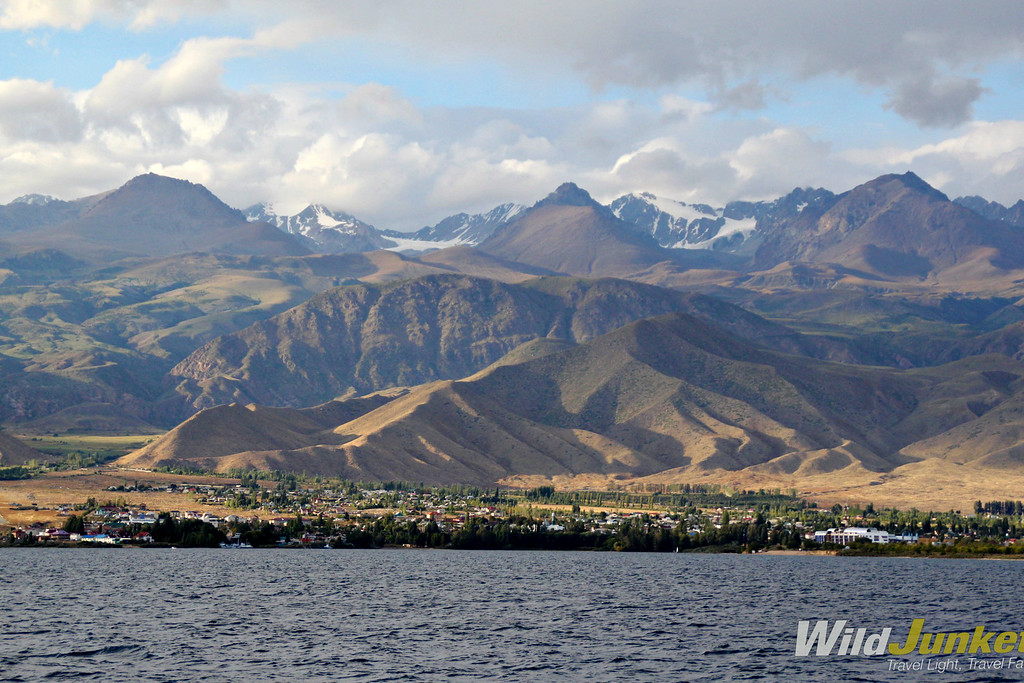 Best Things to Do in Issyk Kul, Kyrgyzstan

Here’s a look at some of the best things to do in Issyk Kul, Kyrgyzstan:

A great place to base yourself is the town of Cholpon Ata, as it has all the facilities you’d need and an idyllic location on the northern shore of the lake. The hippodrome (where the World Nomad Games are held each year) is located right here, so it’s an excellent spot to catch some sporting events as well if you’re keen to learn more about Kyrgyzstan’s horse-racing traditions.

The town is home to several Soviet-style sanatorium (health resorts), many of which sanatorium fell on hard times after the break-up of the USSR. These days, many hotels have been refurbished and simple private bed-and-breakfast pensions are established for international backpackers.

Where to Stay: I stayed at the Kapriz Resort for a week and enjoyed the laid back setting. The resort has large double-storey apartments and family cottages that are extremely spacious and modern, fully equipped with kitchens and washing machine. Alternatively, if you’re looking to stay in a more remote area by the lake, check out Feel Nomad Yurt Camp right on the waterfront, which offers lots of cool cultural activities like meeting Salbuurun (hunters with eagles) available. 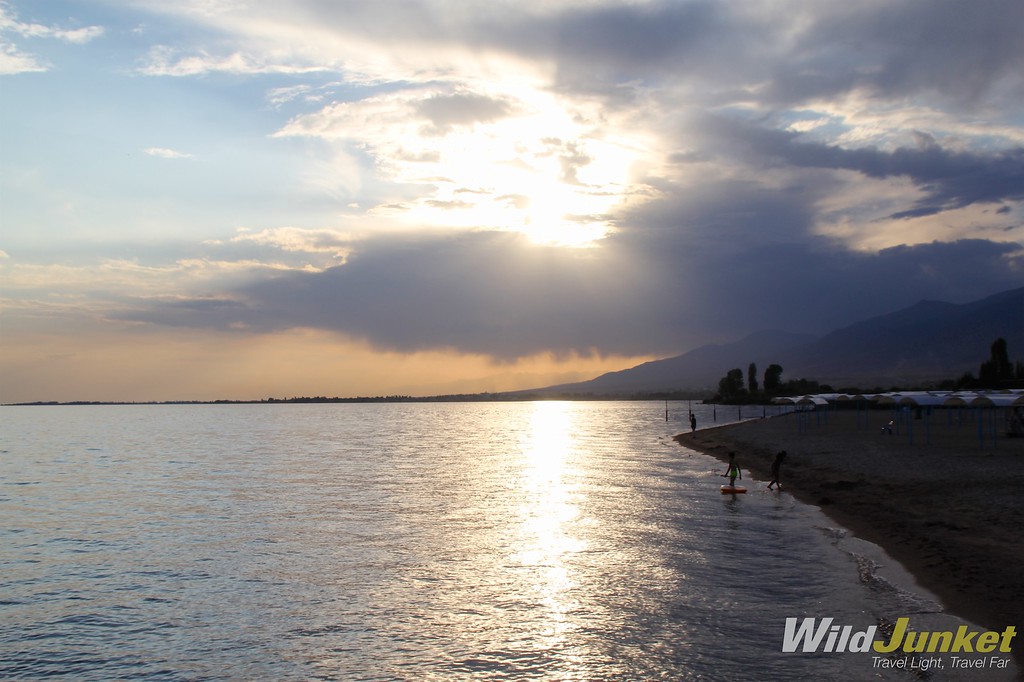 On the green grounds of the cultural centre, the religious buildings stand side by side under one sky, symbolizing the unity of all people’s faith. The complex Ruh Ordo has also a large concert hall with unique acoustics, which often hosts concerts and local cultural events. 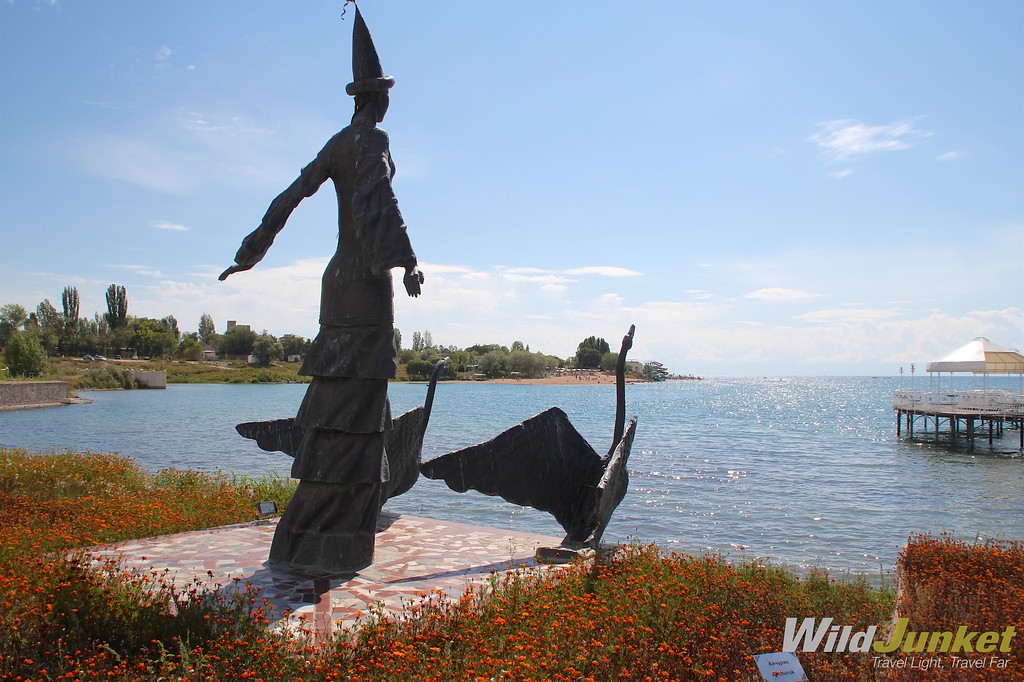 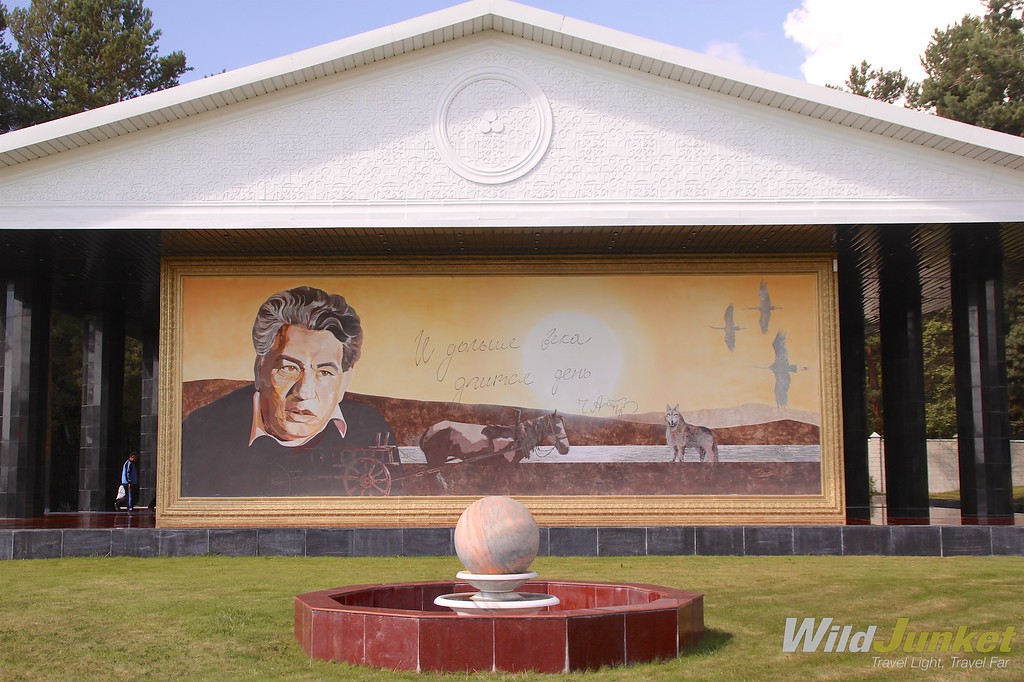 Near Cholpon Ata is an open air museum featuring an extensive field of glacial boulders from the prehistoric era.¬†This open air museum is sometimes known as the Stone Garden, covering an area of 42 hectares and containing hundreds of petroglyphs. Some of these petroglyphs date from the late Bronze Age (about 1500 BC), but most are from the 8th century BC to 1st century AD, predating the arrival of the Kyrgyz in the area. The Saka priests used this sacred site for sacrifices and other rites to the sun god.

The shortest trail in the Stone Garden takes just 20-30 minutes, but if there is a longer route that goes all the way to the upper side of the museum. There you’ll find a bigger collection of stone balbals, stone inscriptions, stone circles as well as a spectacular panorama of Lake Issyk-Kul . Entrance fee is 50 SOM per person.

READ NOW
Trekking in Kyrgyzstan: Everything You Need To Know 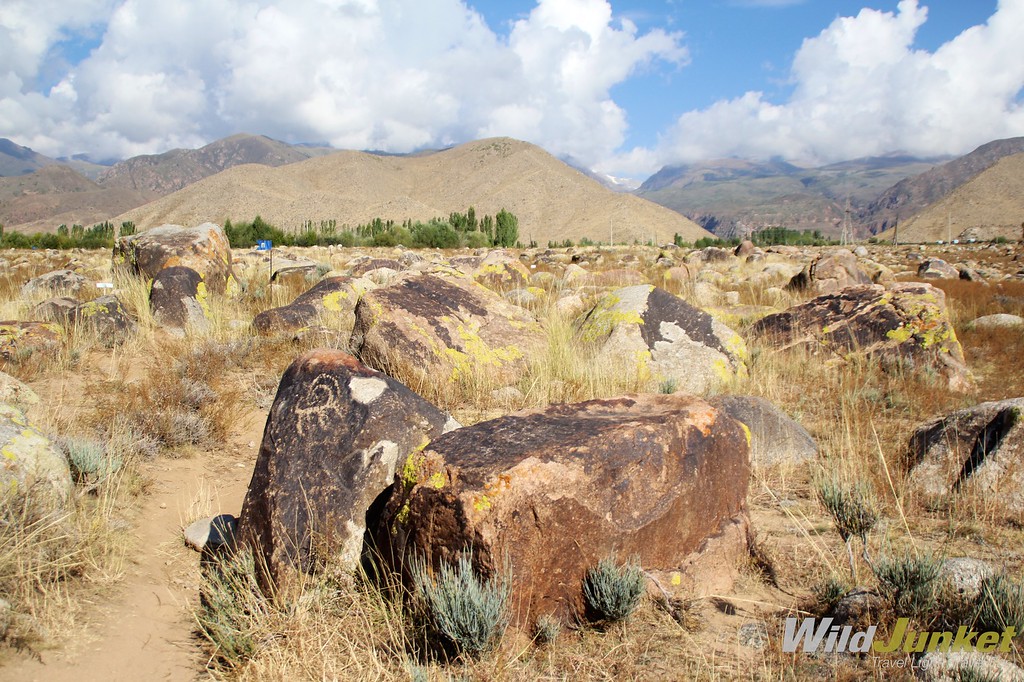 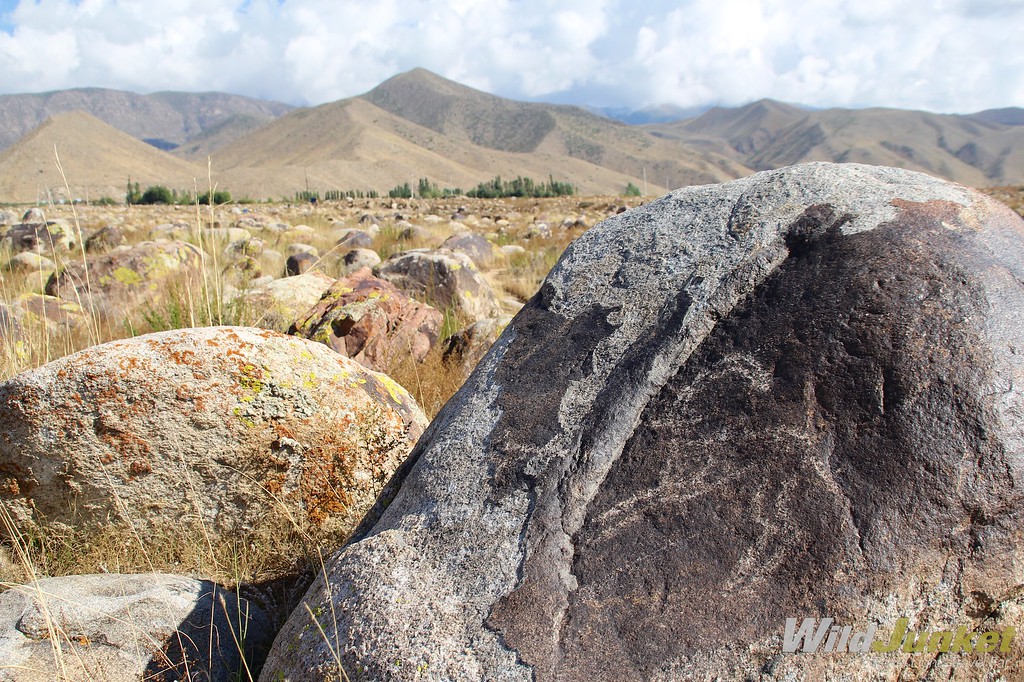 Soak in the Manjyl-Ata Holy Springs

The places I’ve mentioned above are all on the northern shore, which is more touristy and commercialized than other parts of the lake. The south shore, on the other hand,¬†holds better and quieter beaches with less hype and more scenic beauty. You’ll find several simple yurt camps on¬†the south shore, which are great for independent travelers seeking to experience local living. We stopped at one for lunch and had a great time meeting the family who runs and owns the camp.

An interesting spot to visit on the south shore is the Manjyl-Ata hot springs, a religious site for both Islam and Tengrism (a traditional Turkic religion) practitioners. Since the dissolution of the Soviet Union, Manjyl-Ata has been a center of religious activity for hundreds of years. Today many pilgrims still come here from all over Kyrgyzstan to pay respects to the sacred springs and seek treatments for maladies.¬†The hills behind the hot springs are great for leisure hikes though and they offer great views of Lake Issyk Kul. 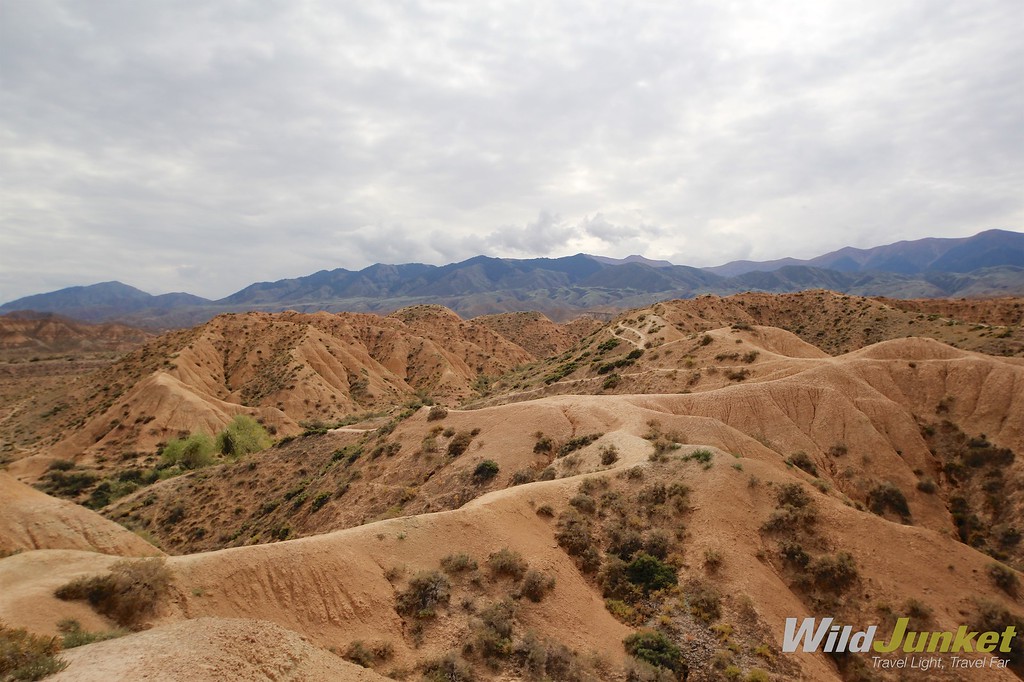 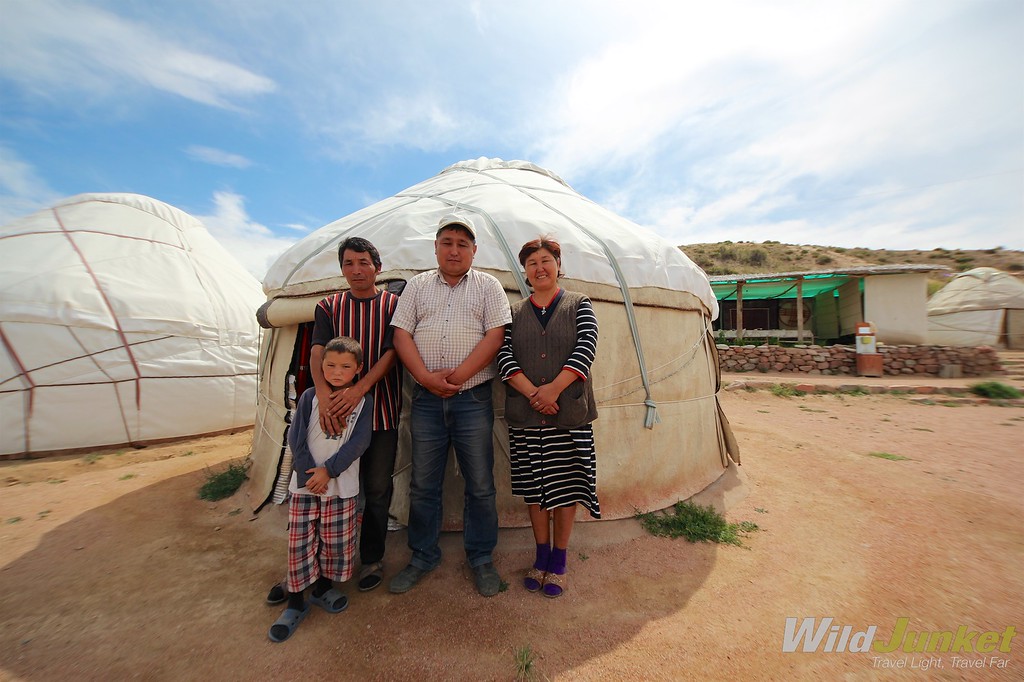 As the administrative seat of Issyk Kul region of Kyrgyzstan, Karakol is the biggest town and the most popular base to go trekking in Kyrgyzstan. Located on the eastern tip of the lake, it’s just a hop away from excellent hiking, trekking, skiing and mountaineering in the high central Tian Shan mountains.

During the Soviet era, Karakol was famous for its ski resort. Today the Karakol Ski Base is still opened to the public and offers lower prices and better facilities than the nearby Shymbulak ski resort outside Almaty. It’s just 20 minutes outside Karakol and worth a visit in winter.

In Karakol’s city centre, I highly recommend exploring the Karakol central market, a labyrinth of food stalls and vendors selling everything under the sun. The market is the best place in Kyrgyzstan to try the ashlyam fu, a cold, spicy soup made up of meat and noodles. A bowl costs less than $1 so be sure to sit down and try some authentic Kyrgyz cold noodles here!

It’s also worth visiting the Dungan Mosque, a Chinese Muslim mosque that spots traditional Chinese architecture and an all-wooden construction. Built in 1904, it still stands strong today and is registered as a historical monument. Another impressive building in Karakol is the Russian Orthodox Cathedral, built completely out of wood in 1890. During an anti-Russian uprising in 1916 its monks were brutally murdered here.

Where to Stay: Happy Nomads Yurt Camp is a beautiful, rustic place slightly outside of the city but with awesome views of the mountains. The yurts here are comfortable, spacious and equipped with clean beds. You’ll also have shower and toilet facilities in the main building. Food here is outstanding — the yurt camp owner prepared a feast for us that was delicious and very authentic.

Trekking in Kyrgyzstan – All You Need to Know 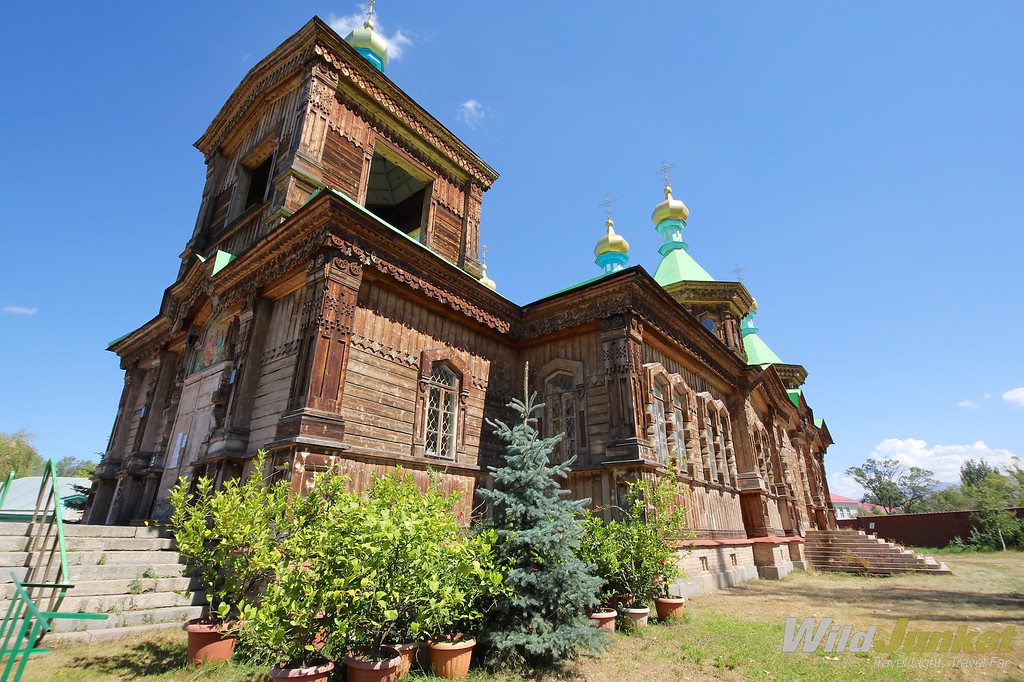 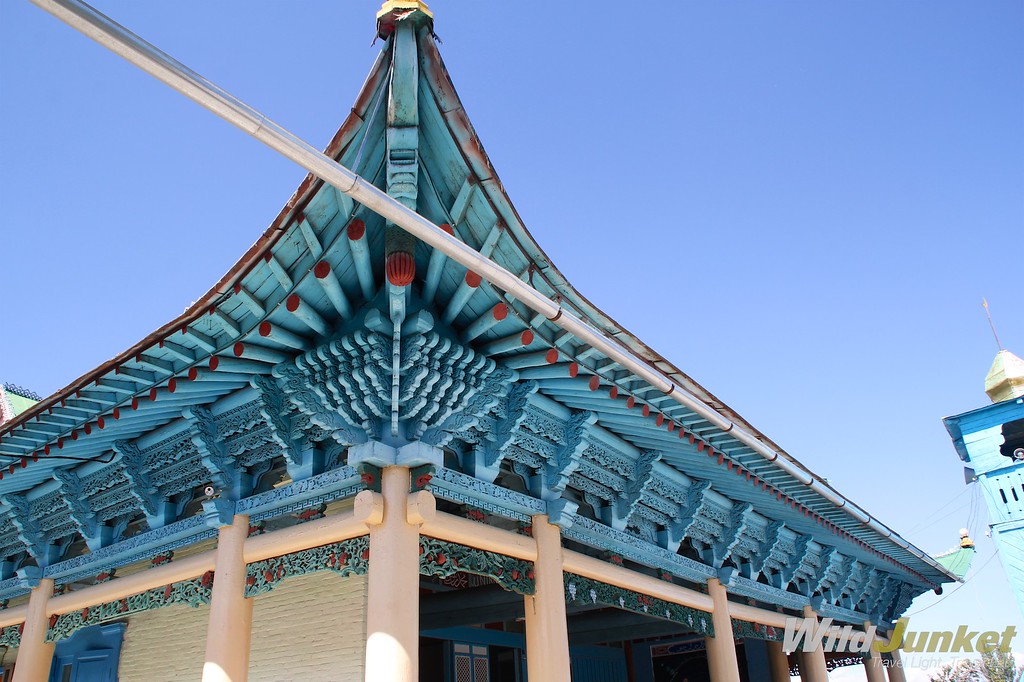 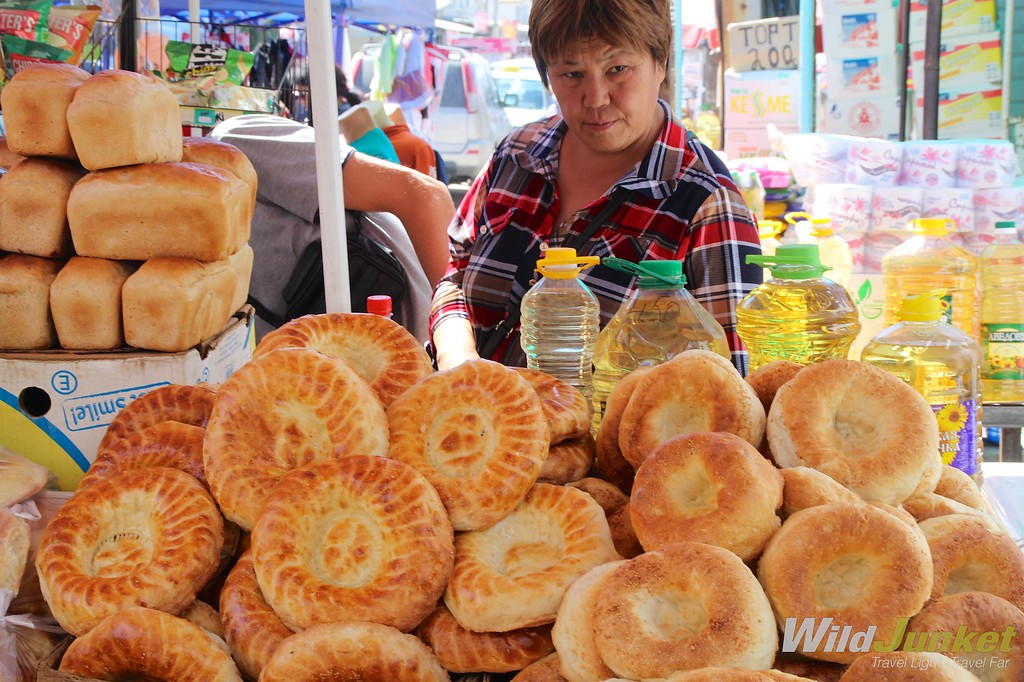 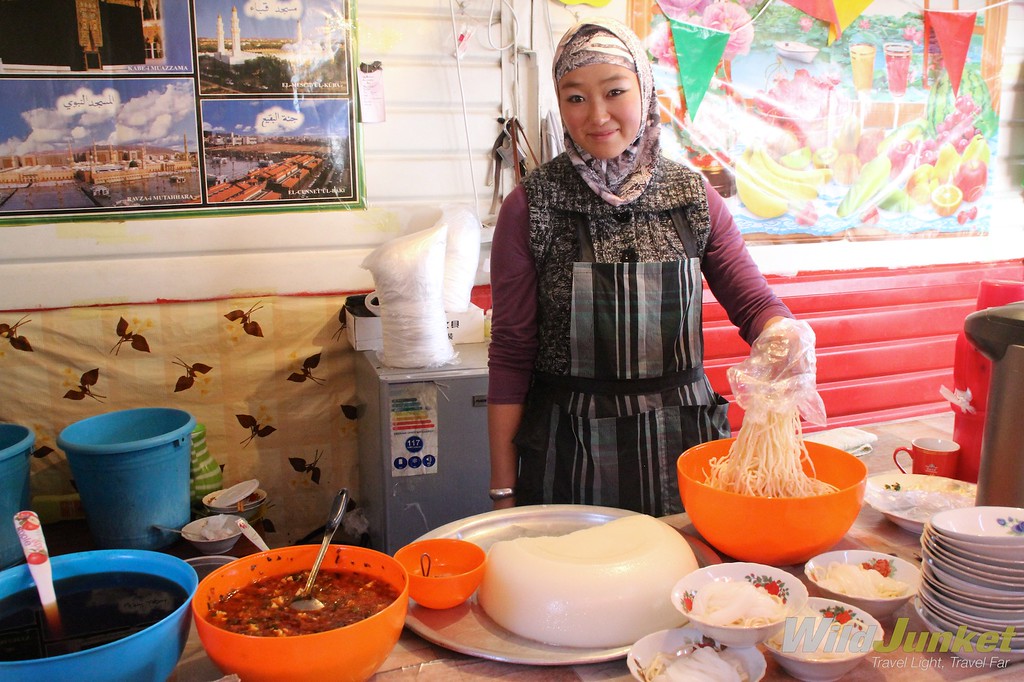 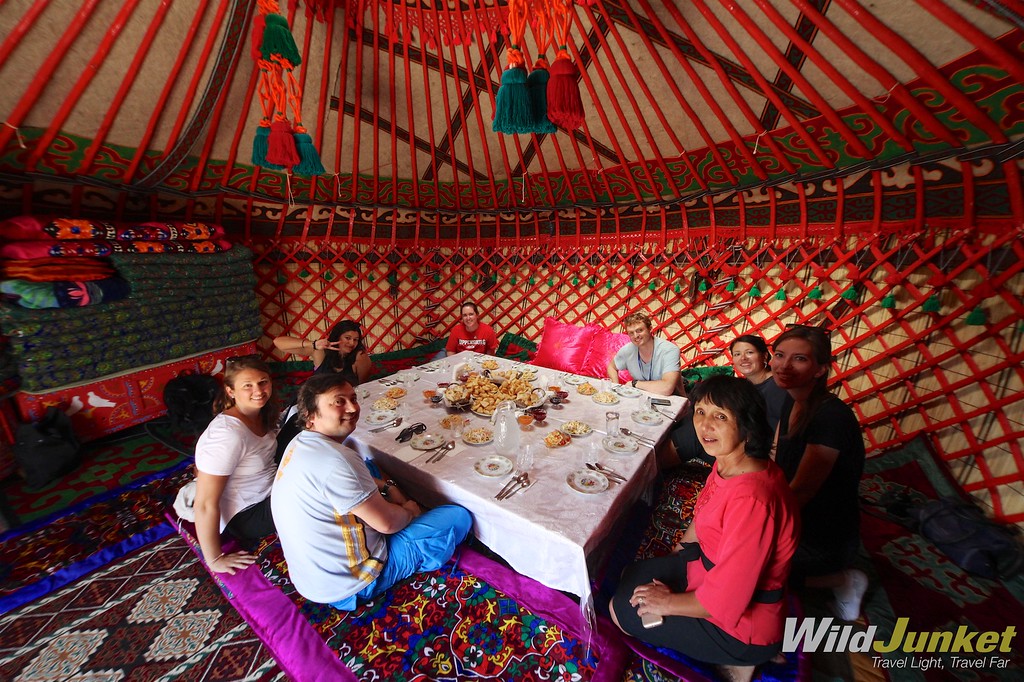 Just 80km outside Karakol is one of Kyrgyzstan’s most photographed natural features, Jeti Oguz or the Seven Bulls. The ridge of red sedimentary sandstone cliffs have been carved out by a river from the Terskey Alatoo mountains. Years of weathering have split the rocks into seven parts, thus giving them the name “the Seven Bulls”.

The formation isn’t especially big, but it looks particularly striking at sunset when the rock’s rosy colors contrast with the surrounding green areas. From the north side, the Seven Bulls ridge appears largely covered by trees, with only the deepest crevice of red-rock visible. From this view the ridge goes by the alternative name Broken Heart and is associated with many tragic legends. 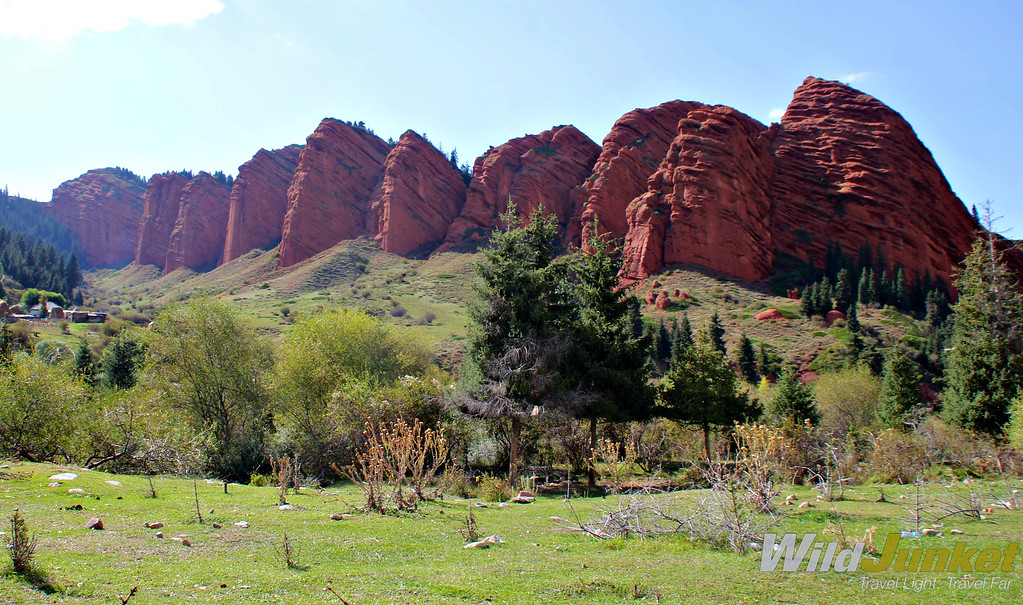 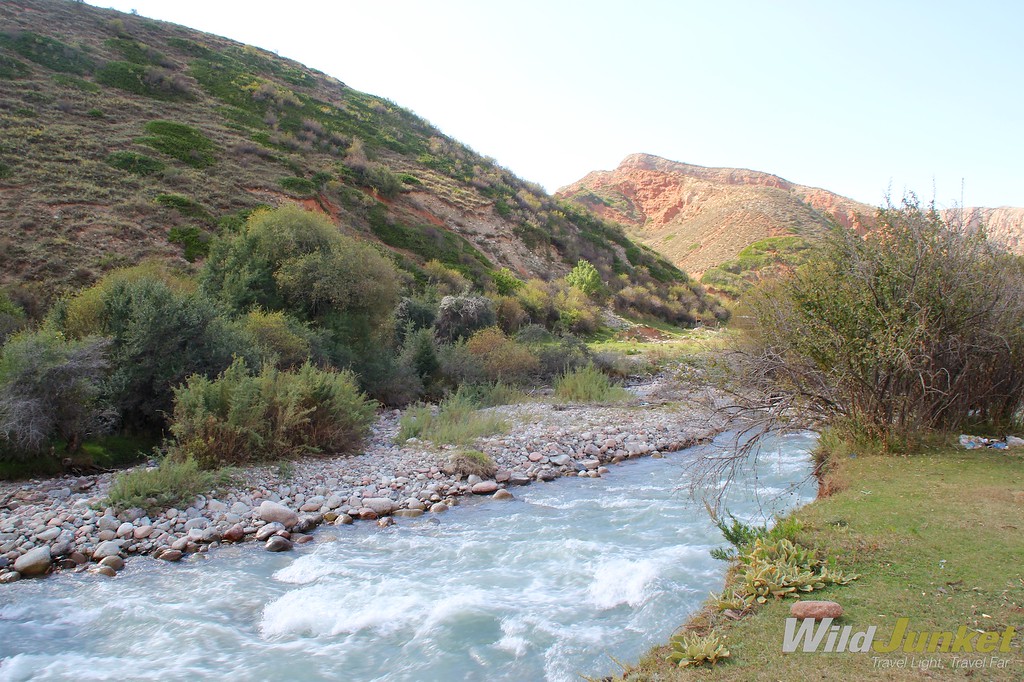 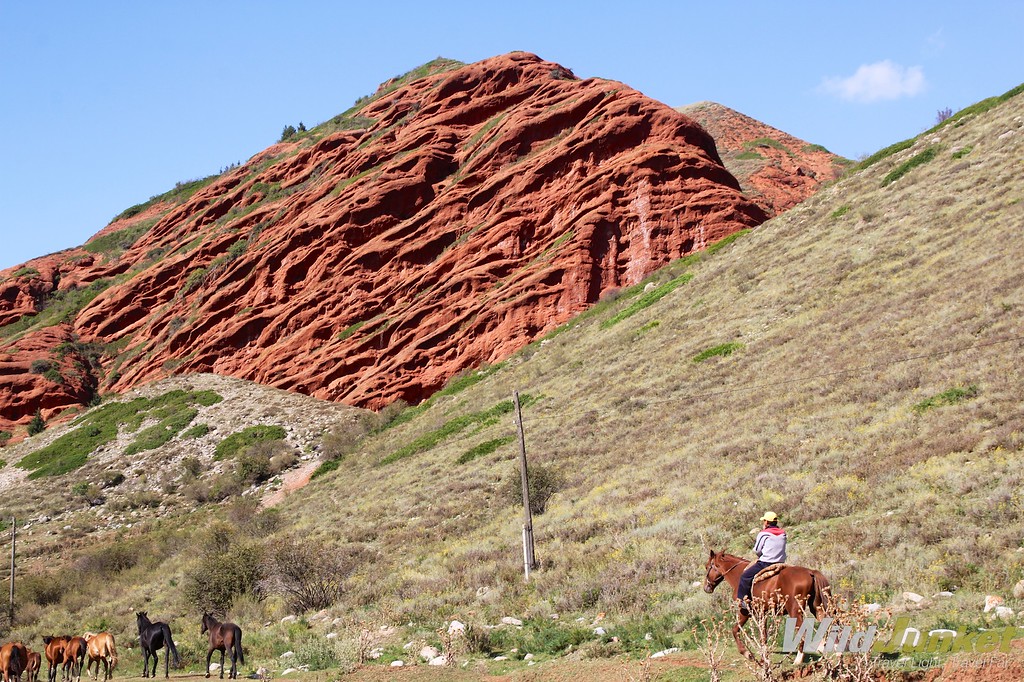 READ MORE: Traveling South Kyrgyzstan – What to See and Do

Disclaimer: My trip was organized in cooperation with Discover Kyrgyzstan. ¬†It was made possible by the support of the American people through the United States Agency for International Development (USAID). The contents are the sole responsibility of the author and do not necessarily reflect the views of USAID or the United States Government. All opinions expressed above are my own.