Ever heard of the Darvaza gas craters in Turkmenistan? I visited as part of a Silk Road overland trip. Here’s my experience.

In the middle of the Karakum Desert, a roaring fire burns from deep beneath us, its flames dancing in the darkness taunting and teasing us. The walls of the oval crater drop vertically down into the abyss of fire — one careless step and you may well be on your way to hell.

They named this “darvaza” (meaning “gate” in Turkmen) for good reason. In the darkness of the night, the ferocious gas crater sure looks like the gates of hell. It’s one of the most unusual sights I’ve ever seen anywhere in the world, one of those rare sights that will stay with me for years to come. Strangely enough, the Darvaza gas craters aren’t the work of Mother Nature. Rather, they are a result of Soviet-era gas exploration that went terribly wrong in the 1950s. The three craters were all artificially created by gas exploration.

Today, one contains bubbling mud, another shallow one contains underground water, while the most impressive one is ablaze with fire visible from miles away. It’s said that scientists were concerned with the effects of the gas on nearby villages and so had lit up the crater with fire, hoping it would burn out after a few days.

How Long More Will They Burn?

But now more than sixty years later, it’s still burning bright. The fire crater has a diameter of approximately 70m and depth of around 50m.

Rumor has it that the burning gas crater may be put out for the government to continue gas exploration — so be sure to get there soon, before it disappears forever.

Sunset at the crater is a powerful sight, but by night, the fire crater is even more spectacular. Here are some shots from the gas craters both in the evening light and by night — regardless of the time of the day, the fire crater never fails to impress. Standing by the edge of the gas crater is quite an exhilarating sensation. As night falls, the flames look even brighter. The gates of hell indeed.

How to Travel to Darvaza

The Darvaza gas craters are located in the heart of the vast and remote Karakum Desert. Getting to the crater require off-road driving and it’s easy to get lost or stuck in the dunes. Most people visit as part of a Turkmenistan tour. There are no hotels in the area, most visitors camp in sheltered areas around the crater.

I traveled to Darvaza as part of  an overlanding trip with Oasis Overland. Over a period of two months, our group of travelers traveled through Central Asia on an overland truck that saw us camping in deserts and mountains, and digging up the mystery behind the Silk Road. If you’re planning an extended trip in Central Asia, you’ll most probably travel to Turkmenistan overland. Turkmenistan shares borders with Iran, Uzbekistan, Kazakhstan and Afghanistan. On entering Turkmenistan by land border, you have to pay $12 entry tax, to be paid in dollars only.

Uzbekistan – There are a few border crossings from Uzbekistan. The Farap-Alat is the most popular one, connecting Bukhara with Turkmenabat. Shared taxis are available on both sides of the border. A taxi to Bukhara from the border will cost around 25$ for the whole car (you can share this with others).

Kazakhstan – It is possible to cross overland from Western Kazakhstan along the Zhanaozen-Turkmenbashi road but conditions are bad. There is no public transport available, and taxis can be expensive: 6000 tenge to Zhanaozen, $45 to Turkmenbashi.

Iran – The most popular border is the Sarakhs – Saraghs crossing. It takes three hours to get from Mashad to Sarakhs in Iran and roughly two hours from Saraghs to Mary in Turkmenistan.

Afghanistan – The only border that is opened to tourists is the Imam Nazar – Aaqina crossing. The road is a dirt track that will require a 4WD and good preparation. There is no settlement on either side of the border, so you will likely continue straight to Atamyrat (previously Kerki) or Andkhoy. 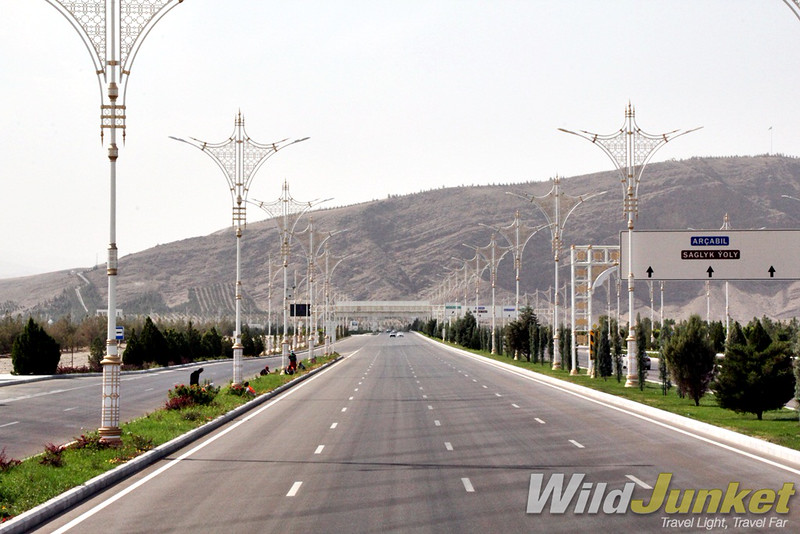 Visa regulations make it quite difficult to enter Turkmenistan (Central Asian visas are notoriously hard to get). There are two types of visas:

Tourist visa – Getting a Turkmenistan tourist visa is not possible without booking a tour. Once you sign up for a guided tour, the operator will handle everything. I traveled to Ashgabat as part of  an overland trip with Oasis Overland. Over a period of two months, we traveled along the Silk Road on an overland truck, camping in deserts and gardens.

Transit visa –  Getting a transit visa might require a long wait, but you do NOT need to book a tour. A transit visa allows for a visit of up to 5 days (Embassy workers in a bad mood might only give you 3 days). I’ve heard that some embassies have started asking for a LOI (Letter of Invitation) for the transit visa. Note that it is a transit visa: this means you need to go from one country to another through Turkmenistan.

To apply for the transit visa, you’ll need to go to your nearest Turkmen embassy. The cost is around 73$ (155$ for Russians). Processing times differ from embassy to embassy. Expect anything from 1 to 6 weeks. Read here for more details.

How Much Time to See Turkmenistan

We only had five days in Turkmenistan, three of which were spent in Ashgabat and two were at the Darvaza gas crater. The city is rather spread out, but there are tons of bizarre and interesting sights to see, so I definitely think it’s worth spending at least three days there.

READ NOW
Best Things to Do in Issyk Kul, Kyrgyzstan

Note that transit visas only allow you to stay in Turkmenistan for 3-5 days, and tourist visas are only valid for the whole duration of your trip (booked with a tour operator).