Weird Foods Around the World

Sheeps brains, bulls testicles, chicken feet — if you’ve traveled to less conventional parts of the world, you would know there are plenty of weird foods around the world.

Growing up in Asia, I have never had problems chowing down pig’s intestines or chicken liver. Some of these strange foods may sound bizarre or even nasty to most Westerners, but they’re just traditional stuff I grew up eating.

Suffice to say, I’ve got a tough stomach and am always game to try strange foods and unusual dishes around the world. If you’re brave enough, come join me on this journey to discover the some of the strangest foods in the world.

Weird Foods Around the World

It may sound obvious, but the vast majority of seafood that people eat is dead. But this isn’t the case with sannakji. The nakji octopus is cut into pieces and served straight out of the kitchen. The Koreans take pride in the bizarre eating ritual of swallowing a live octopus as it slides down your throat, possibly wriggly its tentacles all over your esophagus and stomach.

Typically seasoned with sesame oil, the sannakji should be chewed thoroughly before swallowing, as the suction cups on the octopus’ arms are still active and can represent a choking hazard. This dish can be found in numerous seafood restaurants in Seoul, and is definitely one of the strangest foods I’ve seen.

Fugu is the Japanese term for pufferfish, a fish that swells up into a spherical shape as a defense mechanism, fugu can be baked or fried. However, the most popular way of serving it is sashimi – where it is sliced extremely thinly and served raw along with separate bowls of miso soup and rice.

Regardless of how you choose to eat it, it’s best to eat fugu at a restaurant as opposed to trying to prepare it at home. This is because parts of the fish contain tetrodotoxin, a toxin that can be potentially fatal, with the preparation of the dish strictly controlled by the law in Japan. Only those chefs who have undergone training are allowed to prepare it, so it’s a good idea to eat this dish at reputable establishments.

Fugu is the only unique food that the country’s emperor is not allowed to eat as it is thought to be too risky. But for the daredevils, it could be one of the nastiest foods you’ll ever try!

Personally, this is hands down the grossest food I’ve ever tried and I swear I have sampled some nasty and unusual dishes around the world. Fruit bat soup is a delicacy in Palau (a Pacific island nation in Micronesia) made with small fruit bats who reside in forested areas at the top of trees. The bats’ diet of flowers and fruits also results in their meat being sweeter than the meat of other bats.

The soup is prepared by boiling the washed bats in water, then cooking them with ginger, coconut milk, and various spices (and often vegetables) depending on the cook’s preferences. The worst part about the soup is that the bat stays in tact: with its eyes, teeth and hair all in the their full glory. 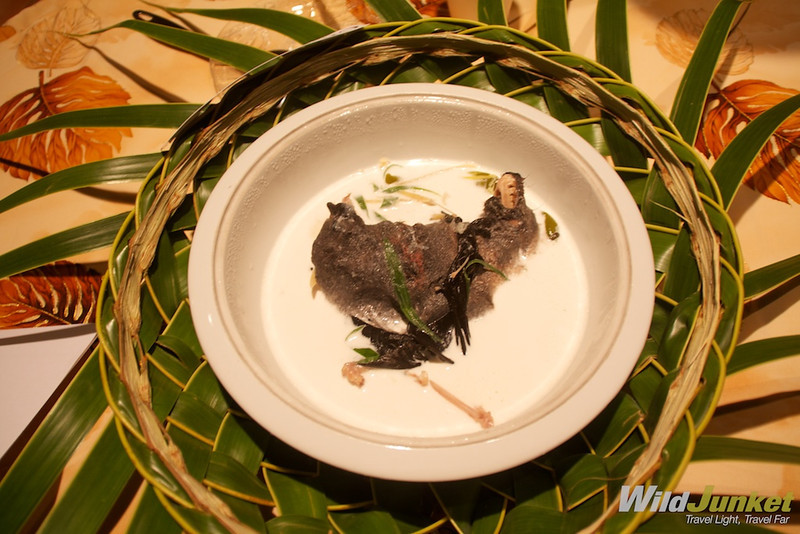 Whale Meat in the Arctic

During my visit to Greenland, I met many Inuits who shared their interesting culinary culture with me. The Inuits inhabit the Arctic, specifically northern regions of Canada and Greenland. To survive in the harsh conditions of the Arctic, they have trained themselves to fish and hunt from their surroundings.

Traditionally, they sustain themselves with a diet that range from walrus to whale meat and even polar bear. But don’t worry, these days, Greenlanders have a whaling quota that allows each community to hunt without affecting the whale population. Today the Inuits still eat these whale meat, usually sashimi style, but mostly on special occasions.

Balut in the Philippines

The balut is possibly one of the nastiest foods I’ve had, mainly because of the crunchy texture of a duck embryo’s bones. Balut is a Filipino snack, commonly sold on the streets of Manila and any city in the Philippines. It is a hard-boiled duck egg with a partially developed duck embryo.

The embryo can have more or less discernible features, from its beak to even some feathers. Just looking at it can cause some nausea, imagine eating it!

In many countries, they are viewed as a humble household pet, but in Peru and Ecuador, the guinea pig (known as cuy) is somewhat of a national delicacy. Especially popular in the Andean region of the South American country, the animal is roasted and served in a dish known as cuy chactado.

The creatures are grown to a larger size than their household pet cousins and are often roasted over fire. The roasted cuy is typically only prepared for festivals or to celebrate special occasions. Because the guinea pig is quite lean, it doesn’t have much meat and can taste pretty gamey. This is definitely one of the grossest foods I’ve tried during my travels.

Another absolutely disgusting food I’ve had is the pickled sheep’s eye in Mongolia. The traditional hangover cure of Mongolia is a “Mongolian Mary,” a pickled sheep eye in tomato juice — think of it as a type of bloody mary. It’s actually a traditional cure that dates back to the times of the great Mongolian leader Genghis Kahn.

I accepted the challenge of chewing the sheep’s eye, but it was SO gross I had to spit it out!

Spend some time in Cambodia and you’ll probably get the chance to try fried spiders, one of the most interesting foods around the world. This delicacy is particularly popular in Skuon, a town that is around 50 miles north of the capital Phnom Penh, and the arachnids you eat are specially bred in underground holes before being cooked in oil.

Often served with garlic and salt, the spiders are fried until their legs are stiff. The spiders are said to taste similar to cod and chicken and have mostly a crunchy texture. The abdomen, in contrast, is soft and has a brown paste that consists of organs, eggs and excrement. While some people choose to avoid eating this part of the creature, others see it as a delicacy.

The dish is not only eaten for its taste, but locals believe it has many medicinal properties and can help to relieve asthma, back pain and other ailments.

If you’re seeking a drink to match the unusual food on your plate, snake wine could well tick all the boxes. This alcoholic beverage not only has snake blood dissolved into it but is also bottled with one of the creatures inside it.

Thought to have many medicinal qualities, the rice wine-based drink is often advertised as helping to cure hair loss and farsightedness, while it is reported that it can also help to improve virility. Popular throughout South east Asia, snake wine is especially drunk in Vietnam and southern China. 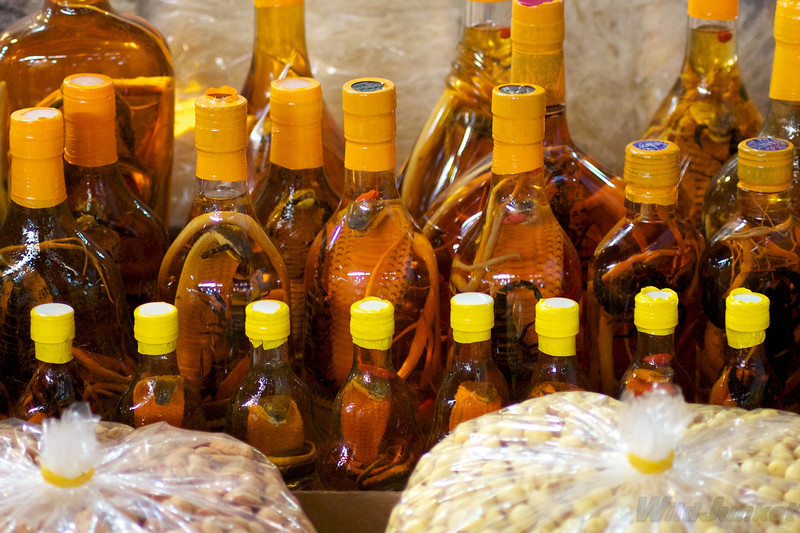 These insects are particularly popular in Thailand, and are definitely a weird food to try when in Thailand. Often found at local markets, you’ll find them sold with their wings and legs attached, although some do not choose to eat these parts of the body.

In the Middle East, however, grasshoppers are boiled in hot water and salted before being left in the sun to dry out. In Thailand, these creatures are usually deep-fried to crunchy richness.

Donkey and Sheep Genitalia in China

China is home to many of the weirdest foods around the world. A specialty in serving weird foods, Guo Li Zhuang is a chain that has several restaurants in Beijing, China. They prepare dishes using the genitalia of a range of male animals, including donkey, ox, water-buffalo and sheep.

Many of the dishes on the menu are given poetic names, such as The Essence of the Golden Buddha and Phoenix Rising. The Chinese believe that consumption of such body parts will help with a number of medical ailments.

One popular snack you’ll find in Taiwan’s street markets is pig’s blood cake. Made from sticky rice and pig’s blood, this delicacy is served on a wooden stick and eaten in the same way as an ice cream or lollipop.

In other parts of Asia like Singapore and Malaysia, pig’s blood is often made into tofu-like cubes and cooked in soups, along with other pig’s organs like intestines and stomach. It is believed to be good for health, replenishing your body’s lack of blood. I used to eat this weird food growing up in Singapore, but it’s no longer popular these days.

Frogs’ legs are a well-known element of French cuisine, but have you ever considered eating the whole creature? This is certainly the case in Namibia, with the consumption of an entire giant bullfrog considered some sort of a delicacy.

Although most of its toxic organs are not eaten, the fact that giant bullfrogs have poisonous skin means that they can still be dangerous to eat. They are therefore typically not harvested until after the rainy season as the creature’s toxin levels usually mellow out at this time.

However, if you eat this weird food before the season or inadvertently sample the wrong parts you may experience oshiketakata, a temporary kidney failure that will require immediate medical attention, so ensure that you only go to a trustworthy restaurant for this unusual dish.

Which of these strange foods have you tried? Did I miss any weird foods around the world? Leave me a comment below and let me know!