A round up of the world’s most remote islands, for those who love the far-flung and unexplored corners.

Forget Bali, Capri or Bora Bora – if you’re looking to go completely off-the-beaten-path, let me bring you on a journey to discover remote, isolated islands that few people have heard of. Most of these islands are hard to reach, and some are even not open to commercial tourists. We swing from Micronesia to Africa to find the world’s most secluded islands – their sheer isolation from the outside world have made them what they are today.

Standing in isolation, Easter Island is one of the world’s most remote places. Located in the Pacific Ocean, Easter Island is at the southeasternmost point of the Polynesian triangle. Its closest neighbor, Pitcairn island, is 1200 miles (1900km) away, while its motherland Chile is 2300 miles (3700 km) away.

It is one of the most remote islands in the world and getting there is part of the adventure. You will have to fly via Tahiti or Santiago de Chile to get there. Dotted all over the island, the stone statues, known as moai, measure as tall as 21 m. Archaeologists from around the world have flocked here since the 1940s to solve the mystery, but some bits of the puzzle still remain unknown today. 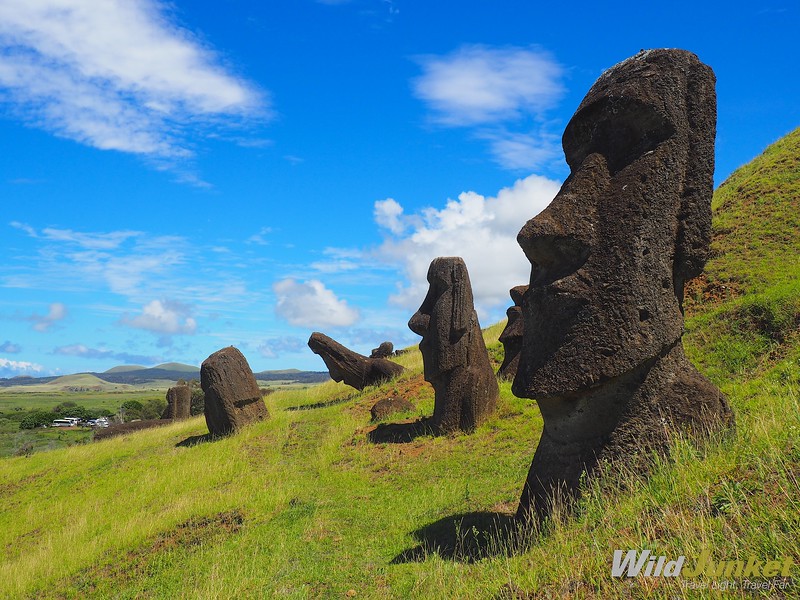 The ​Galapagos Islands​ are a collection of 13 major islands, seven smaller islands and about 125 islets and rocks. They lie about 600 miles (1,000 kilometers) off the coast of Ecuador in the Pacific Ocean. Having been isolated from the world for thousands of years, they are home to unique animal species found nowhere else on Earth. Blue-footed boobies, sea lions, and marine lizards roam freely on this archipelago.
Because of how remote the islands are, Galapagos wildlife never developed a fear of humans. Don’t be surprised to find sea lions lying by the streets and giant lizards swimming around your boat in the Galapagos. They are not the least bit afraid of us. Today, over 97 % of the land is national park, and Ecuador limits who may live there and how many tourists may visit. The islands are some of the most unspoiled places on Earth thanks to protection laws and conservations efforts.
READ NOW
How to Visit the Galapagos IsIands: Travel Guide 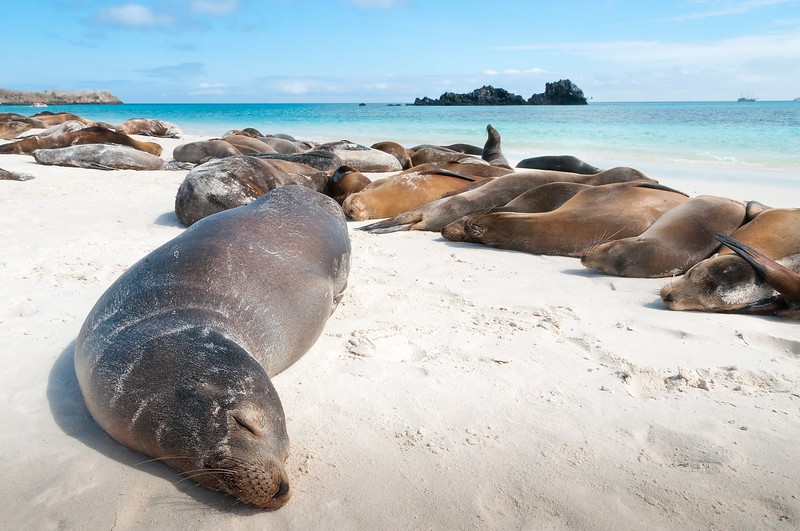 Greenland is officially the world’s largest island that is not a continent. Home to 56,000 people, Greenland has its own extensive local government, but it is also part of the Realm of Denmark.

Located far north in the Arctic Ocean, Greenland is definitely one of the most remote islands in the world. It is home to icebergs as tall as buildings, glaciers glowing in different shades of blue, and a massive ice sheet that covers almost 80% of the mega-island. The best way to see the massive island is on a Greenland expedition, where you’ll get to cruise, kayak and hike in the backcountry.

After traveling Greenland twice (as a researcher and media), I have completely fallen under its spell. Check out this Greenland travel guide I’ve written to help you plan an adventure of a lifetime.

READ NOW
Traveling to Greenland: All You Need to Know 2021 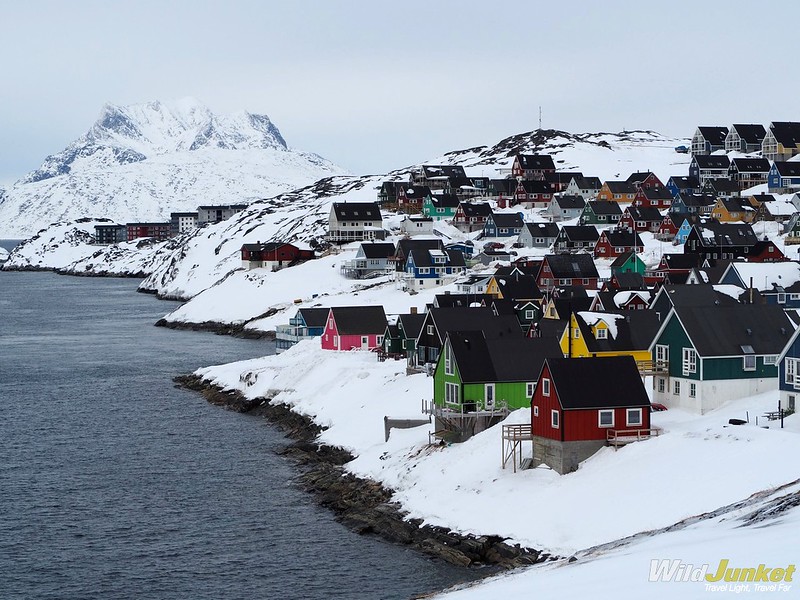 Far north of mainland Europe is this remote island archipelago in the Arctic Ocean. It lies midway between continental Norway and the North Pole. It’s literally the furthest point of Europe.

Administratively, the Svalbard archipelago is not part of any Norwegian county, but forms an unincorporated area administered by a governor appointed by the Norwegian government. Since 2002, Svalbard’s main settlement, Longyearbyen, has had an elected local government, somewhat similar to mainland municipalities.

The archipelago features an Arctic climate, experiencing the midnight sun in summer. I went on a polar expedition cruise that circumnavigated the island of Spitsbergen, and it was an epic adventure. Svalbard is home to plenty wildlife, including polar bears, reindeer, the Arctic fox, and different kinds of whales and seals.

The British island group of Tristan da Cunha stands profoundly alone in the South Atlantic. The nearest landfall is South Africa, 1,750 miles east, and to the west, South America is more than 2,000 miles. It’s the world’s most remote island chain that’s inhabited — so precariously occupied that when a volcanic vent erupted in 1961, the whole population was evacuated to England.
Reaching Tristan da Cunha is no easygoing excursion. All visitors need to clear their arrivals in advance through the Island Council, and they also need to obtain a police certificate. (A 40-day wait is typical.) There are around 10 sailings a year from Cape Town, South Africa, and Namibia, each taking five to six days to reach the islands.

The 375 islands that make up the San Blas are pristine and well-protected — some of them are inhabited by the indigenous Kuna people, but most are deserted. The islands are still relatively undiscovered by mass tourism because of the remote location. Getting here is not easy, but that’s exactly its appeal.

San Blas Islands are home to the indigenous Kuna people (sometimes spelled “Guna”), who has maintained political autonomy from the mainland since a revolution in 1925. They control tourism on their own terms and benefit directly from the money earned from tourism. But their agreement terms with the Panamanian government are constantly changing, so nobody really knows what the future is like for San Blas.

Palau’s  Rock Islands are a phenomenal series of 485 jutting limestone islets rising from the turquoise waters of Micronesia. Most of these Rock Islands have stunning sandy beaches that are completely secluded and make for some excellent lounging ground after a day of scuba diving.

Besides the empty beaches, you can head inland to uncover mystical caves, rock arches, ancient rock paintings and lakes. The Jellyfish Lake – made famous by National Geographic- gives you the unique chance to swim with millions of tiny stingless jellyfish.

Most travelers head to Tanzania’s popular island Zanzibar for pristine beaches, seafood and full-moon parties. But few know of the charm of its quiet neighbor, Mafia Island. There are only a handful of resorts on the isles – so if you’re looking for complete tranquility, then this might just be your slice of heaven.

Mafia’s protected deep-water anchorage at Chole Bay is studded with islands, sandbanks and beaches. Swim with whale sharks or free dive into its coral-carpeted sea bed or lounge on the white sandy shore of Utende Beach.

Seychelles has some of the most remote islands in the world dotted around Indian Ocean close to the coast of East Africa. Expect turquoise waters similar to that of the Caribbean Islands, without the flashy resorts and tourists. If you’re a sucker for remote islands and simple island life without fancy resorts or gastrobars, visit Seychelles and you probably will never want to leave.

La Digue, one of the smallest islands that make up Seychelles, is known for its beaches that are backed by giant boulders, like Anse Source d’Argent. To the south, isolated Anse Bonnet Carré Beach, with calm, shallow water, is accessible only on foot, as is Anse Cocos Beach, in a protected bay on the east coast. La Digue’s diverse wildlife can be seen in the Veuve Nature Reserve.

READ NOW
How to Visit Seychelles: My Seychelles Travel Guide

What was once a refugee camp during the war is now a peaceful, quiet isle rich in endemic flora and fauna. Christmas Island, an Australian territory in the Indian Ocean, has had minimal human interference and therefore is home to some unique animal species that can only be found here. Come and catch the annual red crab migration, swim with whale shark or observe turtles nesting by night – it’s a wildlife lovers’ paradise.

With a population of no more than 50, Pitcairn Island is definitely one of the most remote islands in the world, located 3,240 miles (5,215 km) from the coast of New Zealand. The nearest places are Mangareva (of French Polynesia) to the west and Easter Island to the east.

The island is inhabited by the descendants of sailors from the HMS Bounty, a Royal Navy vessel that was the scene of a mutiny in 1789. In 2004, the island drew international attention when several of its inhabitants were charged with sexual offences.

A patchwork of secluded islands lie in the heart of the Pacific Ocean – many of which are either uninhabited or isolated. On the island of Vanuatu, the local way of life hasn’t changed much since centuries ago. Local tribes lead a primitive lifestyle, living in mudhouses and dancing along to the beats of drums, especially on special occasion. Besides empty beaches, the active volcano, Yasur, itself is worth visiting.

Stretching miles across mainland India is another group of the world’s most isolated islands. They are so isolated from the world that the native tribal way of life is hardly influenced by the outside world. Their ancestors are thought to have arrived in the islands 60,000 years ago from coastal India in the initial expansion of humanity from Africa that began 100,000 years ago. To this day, these tribes still retain their ancestral practices and language.

The Sentinelese people have repeatedly attacked approaching vessels. This resulted in the deaths of two fishermen in 2006 and an American missionary, John Allen Chau, in 2018.

Surrounded by the South Atlantic, the Falkland Islands archipelago lies 280miles to the east of the South American continent. It consists of two large islands, East and West Falkland, and more than 750 small islands and islets.

The Falkland Islands are home to over a million penguins and miles of untamed, rugged landscape. It’s said to offer the same kind of wildlife experiences as Antarctica, but it is a lot more accessible and affordable. Regardless, the Falklands are some of the most remote islands in the world and only the lucky few get to experience its beauty.

Located in the southern Atlantic Ocean, South Georgia island is a remote and inhospitable collection of islands. The Falkland Islands are about 1,300 kilometres (810 mi) west-northwest from its nearest point.

A very small non-permanent population resides on South Georgia, and there are definitely more penguins here than human beings. It is said to be the best place in the world to see masses of emperor penguins.

There are no scheduled passenger flights or ferries to or from the territory, although visits by Antarctic cruises to South Georgia are increasingly popular, with several thousand visitors each summer.

Did we miss any other remote islands? Be sure to share it below in the comments field!