Voodoo culture is still very much alive today in West Africa, specifically Benin, where the religion was born. Here’s a look at how voodoo culture is practised these days. 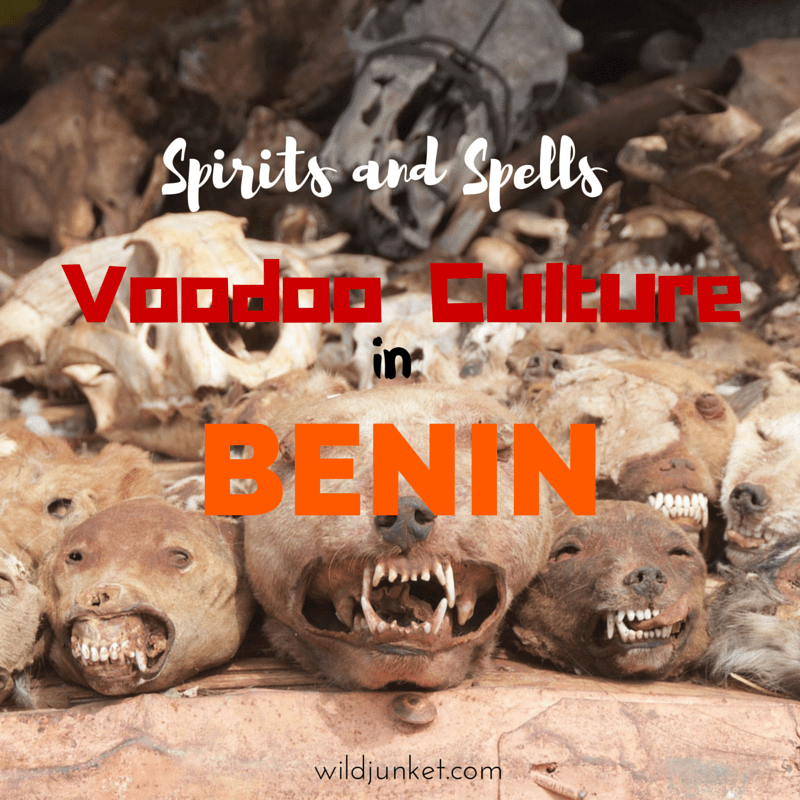 Mention the word ‘voodoo’ and most people conjure images of dolls riddled with nails, and spooky witches casting spells on the innocent. So did I — until my recent trip to West Africa, the birthplace of voodoo.

As I learned on this journey, voodoo isn’t some black magic or evil witchcraft as portrayed in Hollywood movies. In fact, it’s one of the oldest religions in the world, with hundreds of years of history.

West Africans have been practising voodoo long before Christianity and Islam were introduced here. While a large percentage of West Africans are now Christians or Muslims, many still practise voodoo on the side. Officially, there are around 35% of voodooists in Benin (the home of voodoo) now — but the figure jumps to 65%, as many Christians also turn to voodoo priests to cure their woes and answer questions about the future. 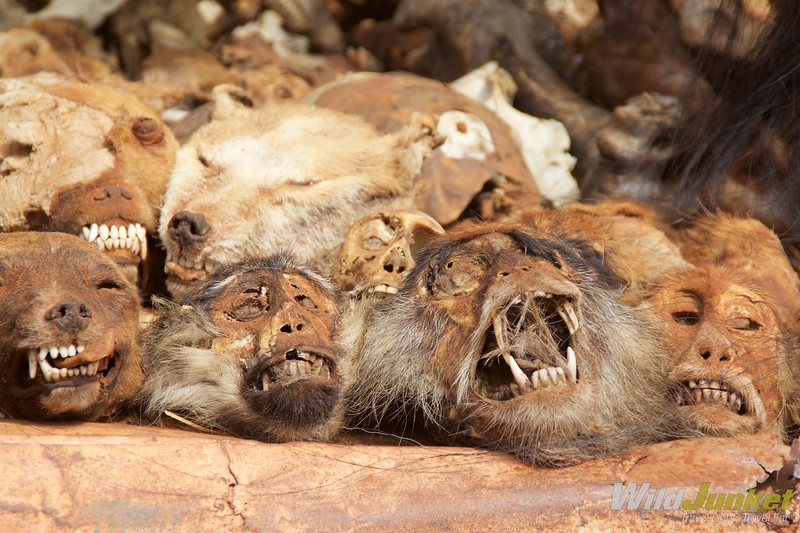 What Does Voodoo Mean?

Voodoo was originally known as ‘vodun’ in Togo and Benin, meaning ‘the mystery’ or ‘the hidden’. It got its current name in Haiti and Cuba, where the religion arrived with the slaves from West Africa and mixed with Catholicism. Today, there are still communities in the Caribbean that still practise voodoo.

Officially, there are around 35% of voodooists in Benin now — but the figure jumps to 65%, as many Christians also turn to voodoo priests to cure their woes and answer questions about the future. Contrary to most beliefs, voodoo is a skullduggery-free part of everyday life in many parts of West Africa. It does have a dark side. You’ll still see dolls stabbed with nails and dead animals used for potions — but this is only one aspect of it.

As with other religions, voodoo practitioners basically worship a supreme god, known as Mawu, and a host of lesser spirits that are specific to ethnicities. There are more than 60 gods and deities in the voodoo world. Each one of them represents a different virtue and aspect of life. The voodoo culture in Benin is so rich and full of history, and definitely one of the most intriguing cultures in Africa. 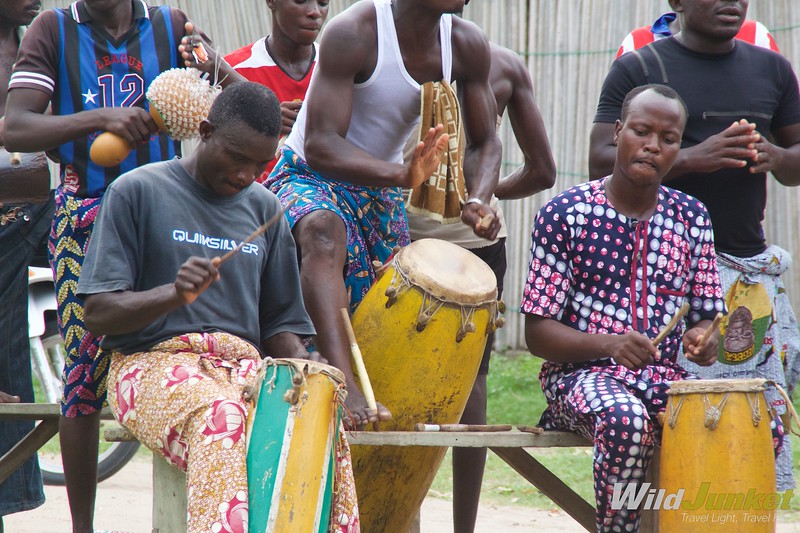 Awakening the Spirits at a Voodoo Ceremony

For voodooists, dances and ceremonies are an important part of their religion. Almost every weekend, you’ll find villages in rural Benin carrying out ceremonies to awake the spirits and thank the deities. These are colorful, vibrant celebrations that involve animal sacrifices and plenty of singing, dancing, drumming and drinking of gin.

Thanks to my guide Ben from Jolinaiko Eco Tours, I had the privilege of witnessing an impressive voodoo ceremony in a small village named Agbannakin, close to the Togolese border, near the beach town of Grand Popo in southern Benin.

Almost every weekend, you’ll find villages in rural Benin carrying out ceremonies to awake the spirits and thank the deities. These are colorful, vibrant celebrations that involve animal sacrifices and plenty of singing, dancing, drumming and drinking of gin.

Voodoo Spirits Are Alive in Benin

We heard the drumming even before we crossed the river to get to the village. It was loud, fast and full of energy. Villagers – young and old, male and female – had all gathered around the voodoo temple, dancing and drumming with fervour. The energy increased with every beat of the drum, reaching a crescendo as the Zangeto emerged.

Tall and massive, the masked spirit was covered in colourful straw, animal skulls and feathers. He began to run wildly towards the villagers and started swirling in a hypnotic motion, sending its straws flying in all directions. 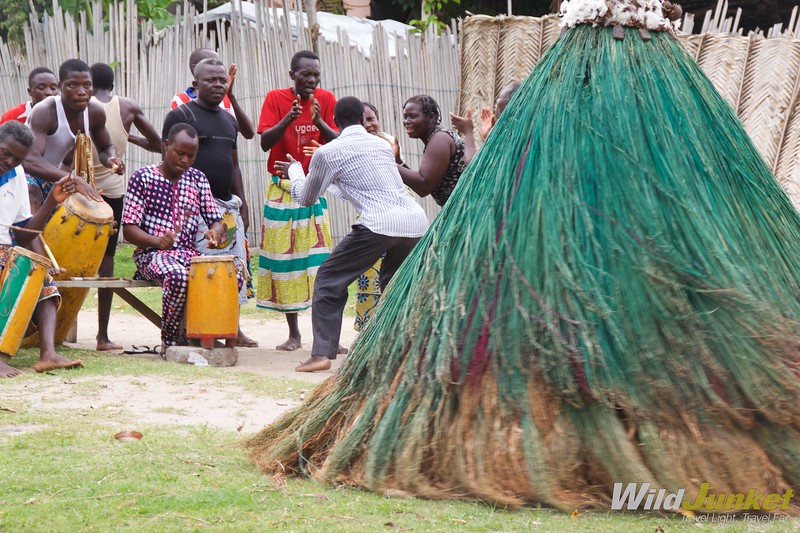 Zangbeto, as my guide explained, is the traditional voodoo guardian of the night for the Ewes (an ethnic group). Translated to mean ‘night watchmen’, the highly revered spirit Zangbeto acts as an unofficial police force patrolling the streets. They track down criminals and present them to the community to punish.

One of the villagers explained to me, “When Zangbeto appears, its performance guarantees the village protection against bad spirits and malicious people. The spinning movement of the mask symbolizes the spiritual cleaning of the village.”

According to my guide Ben, Zangbeto represents non-human spirits. The mask wearers belong to a secret society and keep their identity hidden. The non-initiated cannot know who they are.

I was skeptical at first, and kept focusing my eyes on the mask to see if I could catch a glimpse of the person underneath. Strangely there didn’t seem to be any feet under the mask.

Eventually,  the villagers turned the mask upside down — but there was nobody under the mask. I must admit I was a bit spooked. 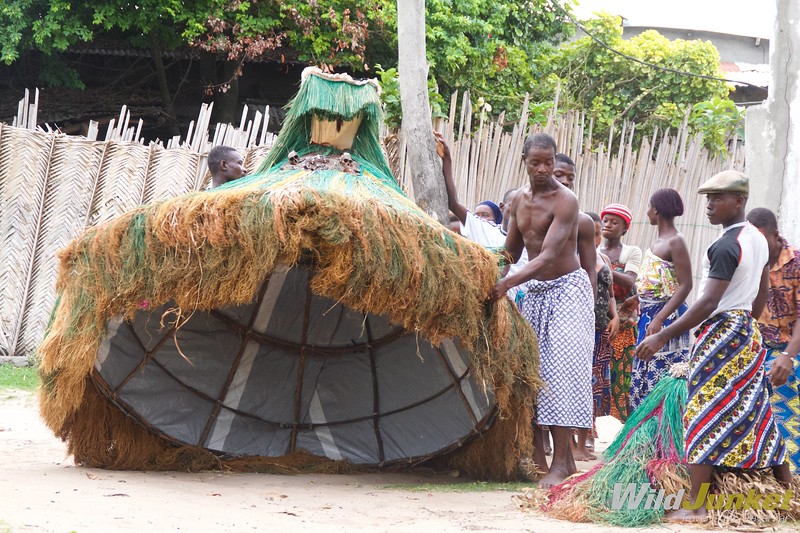 The Belief in Voodoo

Another Zangbeto spirit then emerged and began to run even more wildly all around the village’s dusty center. The drumming was even louder now and the village folks were dancing more energetically than before.

After the Zangbeto made its rounds, a few young villagers grabbed it and turned it upside down, this time revealing a small coffin. I gasped at the sight of a coffin — hoping it didn’t contain a ghastly corpse.

As the four men opened the lid of the coffin, a plastic toy skeleton sat up and surprised me. It was one of those battery-operated Halloween toys that Americans would use on their porch. But here it was, playing a role in a religious ceremony in rural Benin.

I didn’t know whether to laugh at the absurdity of this or to frown upon the way people are being manipulated by voodoo. 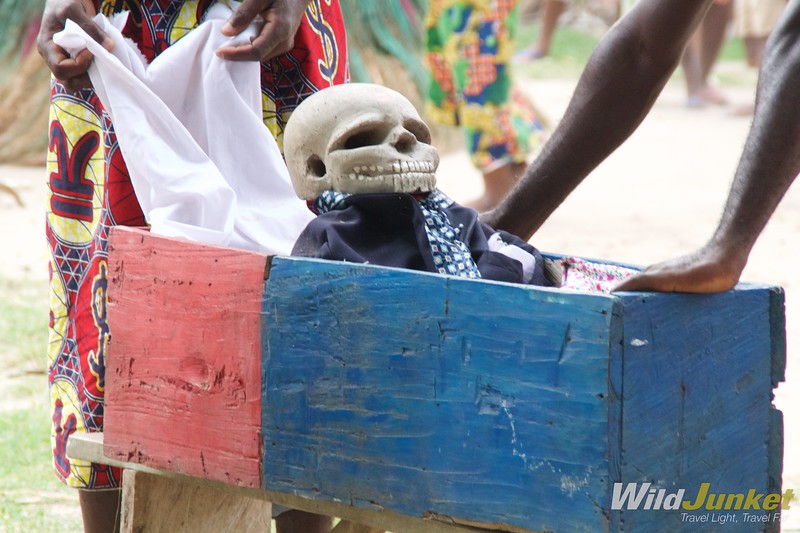 The dancing and drumming continued, with the Zangbeto spirits revealing more weird and obscure objects under their masks. A giant fetish (a clay figure with a giant penis), a pot of incense, and even a figure of an Arab man and his pot of tea.

I asked Ben what the objects represented, and he explained in a matter-of-fact manner, “They show the magic powers of the Zangbeto spirit.”

I left that day with even more questions and a deeper sense of curiosity in voodoo than before. 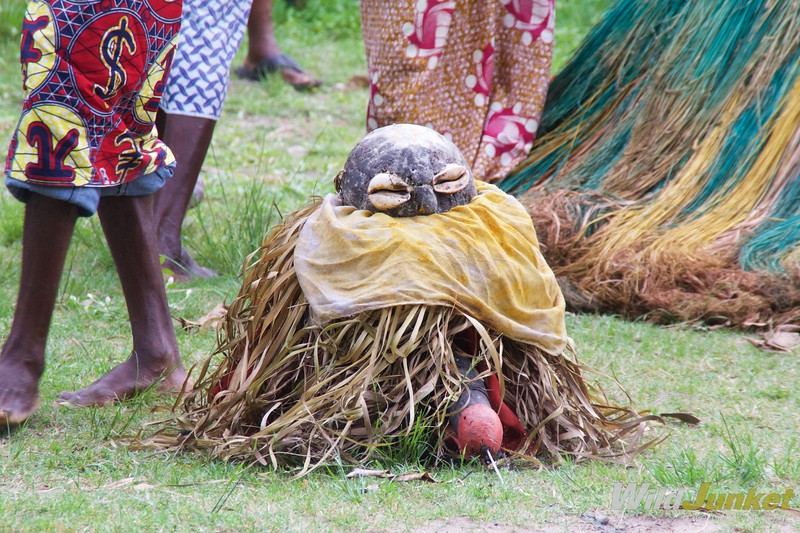 Learning About Voodoo Spirits from an Expert

To understand more about this religion, Ben brought me to more voodoo strongholds to meet voodoo experts and talk to them about their intriguing practices.

At Possotome, a village located on the shore of Lake Ahémé, I met Dennis, a fisherman and local voodoo expert. Dennis practises the Hebiosso branch of voodoo. He shared with me some interesting basis of their voodoo religion.

“We worship fetishes (objects or potions imbued with spirits’ power); every village has a large fetish stone statue at the entrance.” 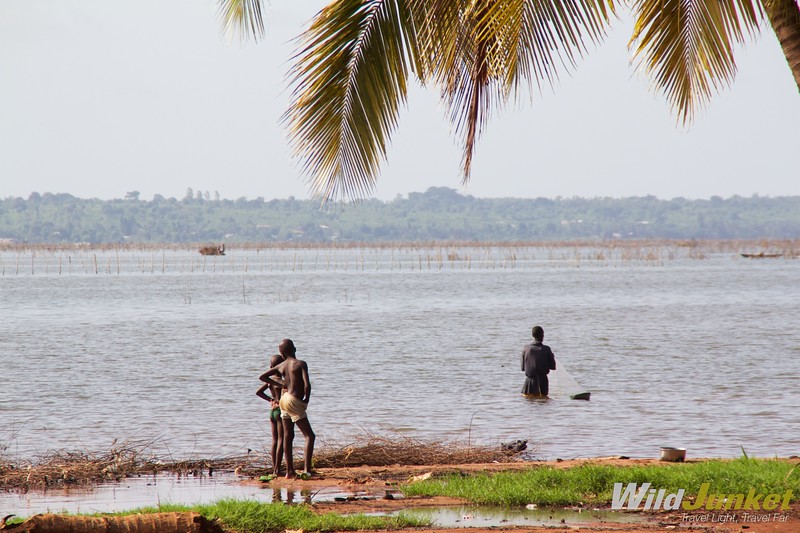 He pointed to a big figure made of Earth, standing beneath the tree by the entrance of the temple. The figure had a pair of eyes and more noticably, a large penis. “This is the deity Malegba, which protects the voodoo temple. Everyone who wants to enter the temple must speak to the fetish priest and getting permission from Malegba before entering .”

Only those who have been initiated into voodoo can enter the temple, and they must always be accompanied by the feitsh priest or juju man. Ladies who are menstruating are not allowed in. 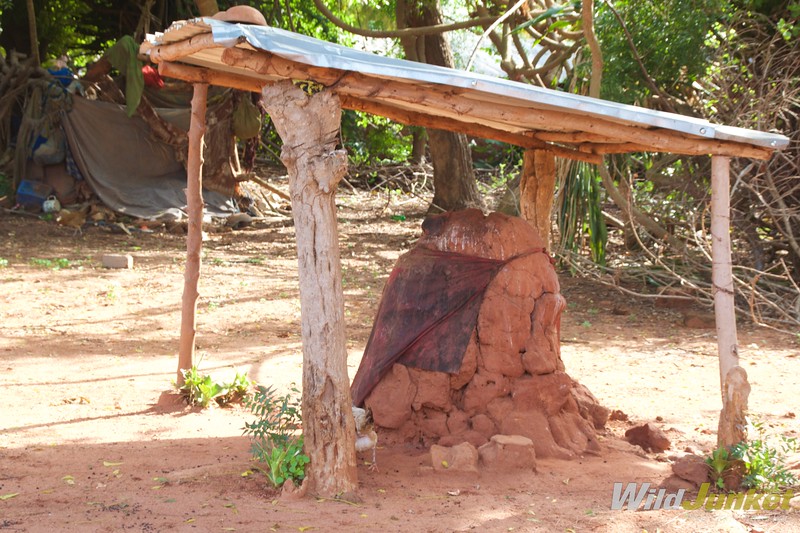 Next to the Malegba statue was a shack made of a few rags interwoven together. “This is the voodoo hotel, as we call it. It’s where we rest the bodies of those who have disobeyed the law (like steal) and punished with death. The body would remain here for three days before being buried.”

To me, it all sounded a little too creepy and brutal. But as Dennis explained, “Voodoo is not black magic.. in fact, it’s white magic. It brings justice and makes people good.”

We continued our walk along the lake and further into the village. Children were playing on the water’s edge, some climbing up the trees. Others were catching little anchovies with their small nets. We meandered away from the water, and found rows of mud houses made with layers of red earth. 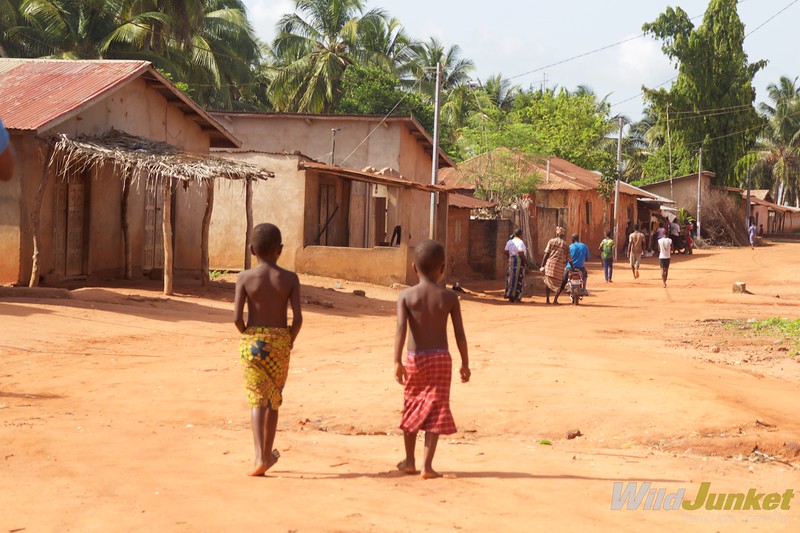 The Goodness of Voodoo

Dennis tells me of the 8,000 people living in Possotome, around 60% practice voodoo. You can identify those who practise voodoo with the white flags that hang from their rooftops and small fetish figures at their entrances.

Eventually we found ourselves in the next village named Welkume. There was again a voodoo temple decorated with paintings of the Zangbeto spirit. Beside it was a hut, with paintings of the fetish priests who have lived here since 1984. They were the only two buildings made of concrete — the other houses I’ve seen were all made from soil.

I asked Dennis how fetish priests are selected and he explained, “The villagers come together and chooses three candidates. The previous fetish priest would then communicate with the spirits to ask which one should be the new priest. The new fetish priest then lives in the temple for one to two years to learn the ins and outs of voodoo from the spirit.” 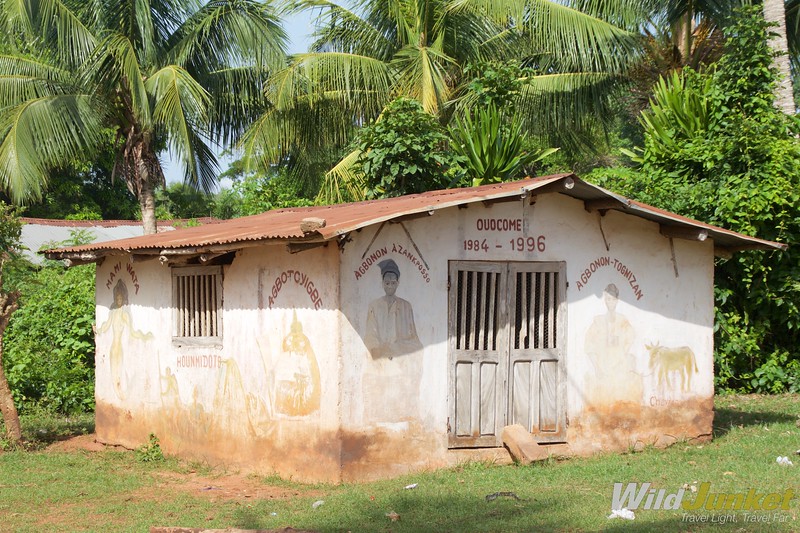 Continuing on, we arrived at the Sacred Forest which stands along the shore of the lake and at the edge of the village. Here at the entrance, we found another big stone fetish figure.

According to Dennis, this deity was the Tolegba who watches over the village. Little tree branches were stuffed into the soil in front of the statue like joss sticks. 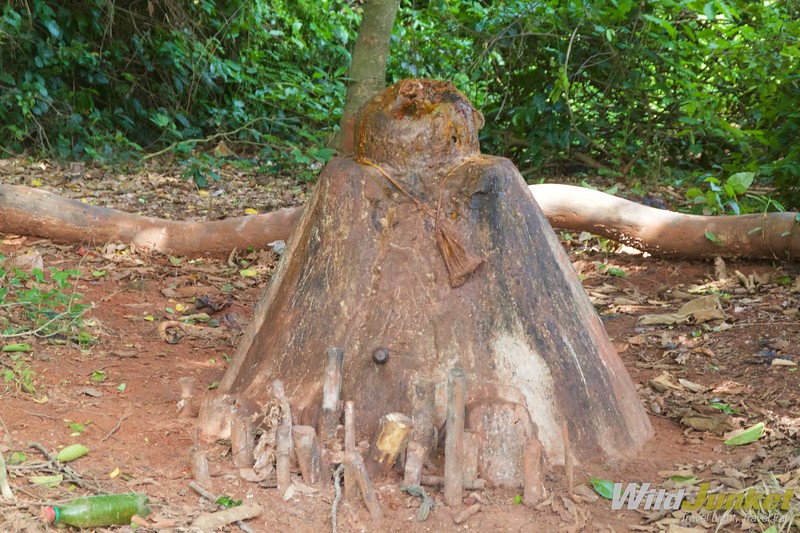 Dennis explained, “The branches represent emulets that people leave here before they travel. They pray to Tolegba for safety. When they return safe and sound, they’ll sacrifice an animal here as a symbol to thank the deity. Then they’ll remove the branch.”

I took a branch and planted it before Tolegba, and offered a short pray for my safe journey home. I’ve never been a religious person, but at that point, I felt like some kind of spirit was watching over me.

Maybe Dennis was right — perhaps voodoo is white magic after all….

READ NOW
Cairo Itinerary: 3 Days in Cairo and the Pyramids

How to Get There:

I traveled with local tour operator, Jolinaiko Eco Tours, who offers affordable, eco-themed trips in West Africa. They specially designed my trip to focus on learning about slavery history and voodoo culture. They also included deep cultural immersions where I got to stay in rural villages and experience local daily life. My two-week trip also included several hikes to allow me to explore the nature of Ghana, Togo and Benin.