Best Things to Do in Cape Verde

Planning a trip to Cape Verde? I knew nothing about it before my trip and ended up loving it way more than I expected to. Here’s my recommended things to do in Cape Verde.

Located 500km off the coast of West Africa, Cape Verde (also known as Cabo Verde) is a group of 10 islands and five islets. The once uninhabited islands were discovered and colonized by the Portuguese in the 15th century. They subsequently became a trading center for African slaves. It gained independence in 1975, although the strong Portuguese influence still remains.

During the 20th century, severe droughts caused the deaths of 200,000 people and prompted heavy emigration. Today, more people with origins in Cape Verde live outside the country than inside it and support the economy with money transmitted from overseas. Over the years, Cape Verde has won a positive reputation for being one of the wealthiest countries in Africa. 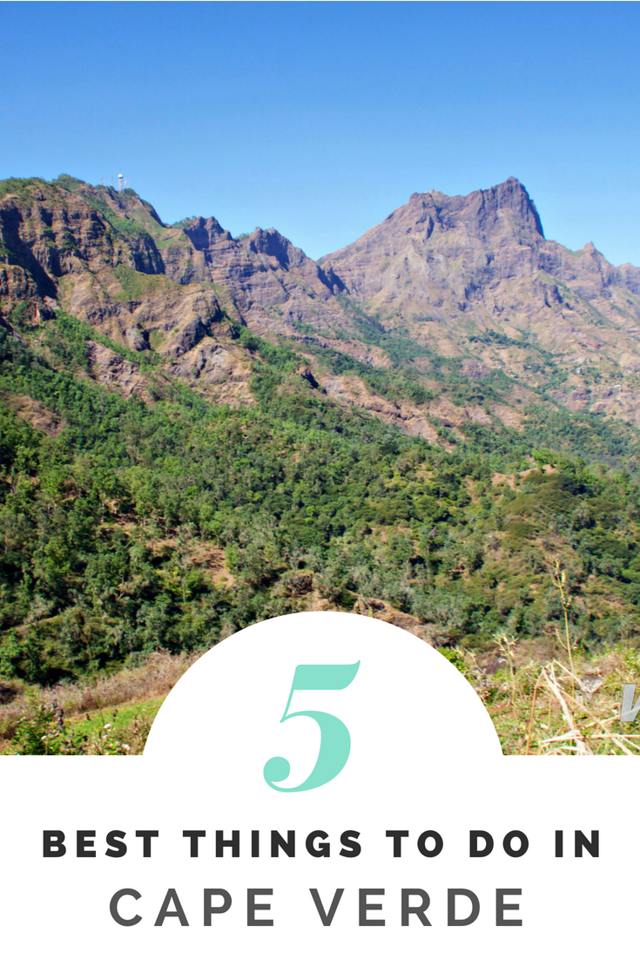 Best Things to Do in Cape Verde

Most European tourists head straight to the islands of Sal and Boa Vista in Cape Verde for their spearmint blue waters and picture perfect sandy beaches. But I wanted to learn more about the essence of the country and its people. I chose to explore Santiago instead, the biggest of the islands at 991 sq km (383 sq miles).

Because of its size, Santiago is probably the most diverse island in terms of its landscape. There are as many sandy beaches as there are mountains, fertile valleys and plateaus. Two volcanic mountain ranges dominate the island, leaving it with plenty of lush green hillside and winding valleys.

Santiago is also the cultural heart of Cape Verde, having been the primary location of the slave trade during its height, and is home to the UNESCO world heritage old fort site at Cidade Velha. On this island, you’ll also find the capital city Praia, the governmental and economic epicentre of the country. Here’s a look at some of the best things to do in Cape Verde.

1. Get Lost in Praia – The Bustling Capital City

Praia is busy, loud, and hectic — although relatively tame for African capital cities standards. About 100,000 people live in the city. The core of the old town is known as Plateau and – as its name implies – is built on a plataeau with its magnificent houses and regal mansions from the colonial era.

Some interesting sights include the Nossa Senhora da Graça church, the Palace of Justice, the Museo Ethnográfico, the presidential palace, the parliament building,  and the old town fortress of Bateira. From the latter you can enjoy a wonderful view of the ocean. Further in the distance, slums that are reminiscent of Brazil‘s favelas and suburbs with multi-storied concrete buildings also dominate the cityscape.

Where to stay in Praia:

I stayed at Pestana Tropico Hotel, one of the best hotels in Praia that is close to the beach and offers affordable prices. The hotel is modern, clean and spacious and enjoys a privileged location right on the water. It’s also located in a safe and high-end residential area. It’s within walking distance from popular restaurants and bars like Ipanema and El Pescador. A taxi into Plateau costs just 200 CVE (US$2 or 1.70 euros). Check their prices here.

2. Visit Cidade Velha – A Peek into Cape Verde’s Past

This is the oldest site of Cape Verde, having been established in 1462. It was here where the history of the archipelago started. After the Portugese established a port here, Cidade Velha (translated to mean ‘old town) became a trade center and was a hub for the slave trade.

Sao Felipe fort was built in the 16th century to protect the Portuguese against pirates and other enemies. On the road to the fortress you can see the pillory of the slaves, the ruins of the cathedral and churches. You’ll also find the first church to be built in West Africa just a short walk from town. The site is now an official UNESCO World Heritage site. Cidade Velha is just 10km from Praia and a short local bus ride away.

Where to stay in Cidade Velha:

Villa Halcyon Caboverde is the best place to stay at Cidade Velha. The 4-bedroom villa has a beachfront location and private pool, and absolutely stunning views of the coast. It’s perfect for those traveling in a big group. Check the latest prices here.

If you’re looking for something smaller and simpler, check out Pousada Quinta Ribeirinha which also has a pool but much more afforadable prices. It reminds me of a typical guesthouse in Spain or Portugal, with sundecks and a beach bar. Check the prices here. The interior of Santiago is crisscrossed with hiking trails that weave their way up and down the steep slopes and into tiny villages and communities. Some of the best areas to hike are in the Serra Malagueta National Park and in and around the island’s highest peak, the Pico d’Antónia. These areas are blanketed with achadas (plateaus) and flat-top mountains of lava rock, as well as rich vegetation: Acacia, euphorbias and figs are very common here since the soil is comparatively moist.

I went on a day hike around the Sao Jorge area, descending from Rui Vaz and arriving at the botanical gardens of Sao Jorge. It was a relatively easy walk, through lush rainforests and eucalyptus forests. I definitely think it’s one of the top things to do in Cape Verde, whether you plan to visit other islands or just hanging out on Santiago.

Where to stay in Sao Jorge:

There aren’t many accommodation options in this area, and pretty much the only place to stay here is Quinta Da Montanha, located in Rui Vaz. Thankfully, this cozy guesthouse has a spectacular location on the hilltop, with stunning views of the whole of Sao Jorge. Glass windows at the breakfast area open up to panorama of the mountains. Check the latest prices here. 4. Wander Around the Market of Assomada

Located right in the center of the island, Assomada is the largest city in the region of Santa Catarina. It lies at about 550 m elevation on a plateau surrounded by mountains, farmland, and hills. It’s a bustling town with a large African population and it is also home to the largest local market on Santiago. To soak in the energy and colors, head on to the central market of the island on Wednesdays and Saturdays.

Where to Stay in Assomada

There are only two places to stay in Assomada. Pensão Asa Branca is a cheap and surprisingly clean and comfortable place. Don’t expect four-star comfort of course, but it’s simple and clean, and within walking distance from the market in Assomada. Check the latest prices here. 5. Relax on Tarrafal – The Best Beach on the Island

What’s lauded as the best beach on Santiago, Tarrafal is a pretty little palm-fringed bay. It’s protected from the wind by the imposing mountains of Serra Malagueta. I spent a few hours here, first swimming the cool Atlantic Ocean, then watching the boats arrive at the small fishing harbour. Soon after I was watching locals barter for the freshest catch of the day. Once a week, there is a also market on the church plaza which otherwise is quite quiet and tranquil.

Where to stay in Tarrafal:

Vista Mar is a surprisingly modern place right on the beachfront of Tarrafal. You can’t ask for a better location as the sand is literally steps from your bedroom. You’re also within walking distance from town. Prices are also affordable. Check for prices here.

Casa Strela B&B Tarrafal is a cheaper option that’s equally modern but simpler and further from the beach. It’s still just a 3-minute walk and I love the colorful vibe of the place. Check for latest prices here. How to Get to Cape Verde

The main international airport on Santiago island is the Nelson Mandela Airport, 3km away from Praia. Only six airlines fly to Praia, with TACV, the national airline, serving the most destinations.

I flew TACV from Lisbon and it was a 4-hour flight. Be warned though, TACV doesn’t have a good reputation for being punctual. My return flight was delayed and I missed my connecting flight from Lisbon to Madrid. You can also find some really good deals from London to Praia.

From the airport to Praia, you can easily catch a taxi for just 1,000 CVE (Cape Verdean Escudos) – about US$10 or 9euros. It takes around 10 minutes to get to Plateau or the area around it.

Search for Flights to Praia How to Get around Cape Verde

Praia itself is a busy city, though it’s very small in comparison to other cities in Africa. You can easily spend a day or two wandering around Plateau, the old town of the city. There are plenty of vans that take you around Praia or to nearby towns like Cidade Velha — you can catch them from the central market and wait till the van is full to leave.

Most people base themselves in Praia and then take day trips from there to explore the island. Cape Verde Experience offers day trips around Santiago including a full-day tour of the island (which I highly recommend). The day tour brings you through the gorges of Sao Jorge. Then into the markets of Assomada, visiting the concentration camp, before spending a few hours relaxing on the beach at Tarrafal.

You can also book hiking excursions through Cape Verde Experience. I did a half-day trek in Sao Jorge, starting from Rui Vaz and descending 700m, hiking through algarve groves, sugarcane plantations and eucalyptus forests. My local guide Salazar was very knowledgable and helpful, and he shared lots of interesting stories on life in Cape Verde.