If you’re dreaming of seeing a puffin in the wild, go to Mykines. You’re guaranteed to see puffins around their breeding grounds on the westernmost island in the Faroes.

I hold my breathe and keep still. The wind is howling and whipping at my face, which has turned red from the wind and sun. My nose is wet and numb from the cold, but I don’t care.

A puffin is standing before me, burrowing into the hole on the steep slope. Another one joins him. And another…

These little feathered creatures are the cutest thing I’ve seen, with their orange and red beaks that are sharp as knife, black fluffy bodies that waddle when they walk, and beautiful wings that look massive when spread. 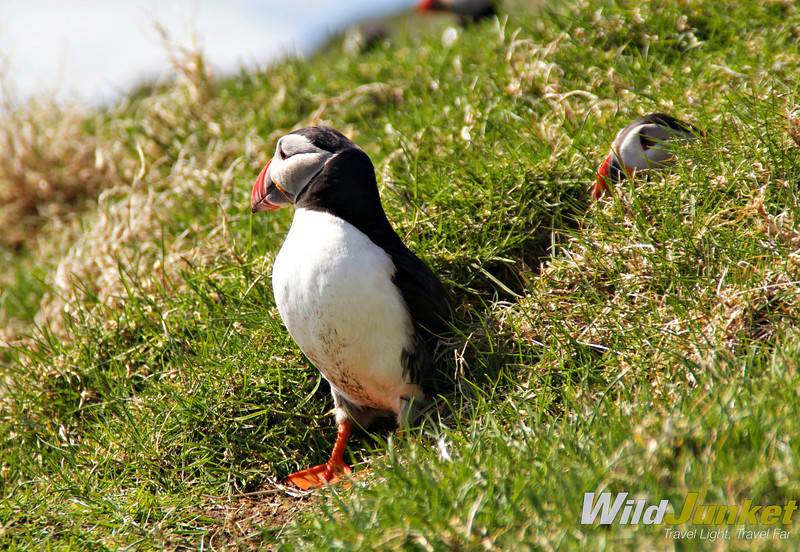 Hundreds of puffins stand perched on the steep slope. Some burrowing into their nests, others fighting with others for food, and a few of them are just staring out to sea. Almost as if they were deep in thoughts.

I’ve seen many animals out in the wild before — from polar bears in Svalbard to penguins in Antarctica — but puffins are a first. I missed the chance to see them in Iceland but this intimate encounter on Mykines definitely more than makes up for it. 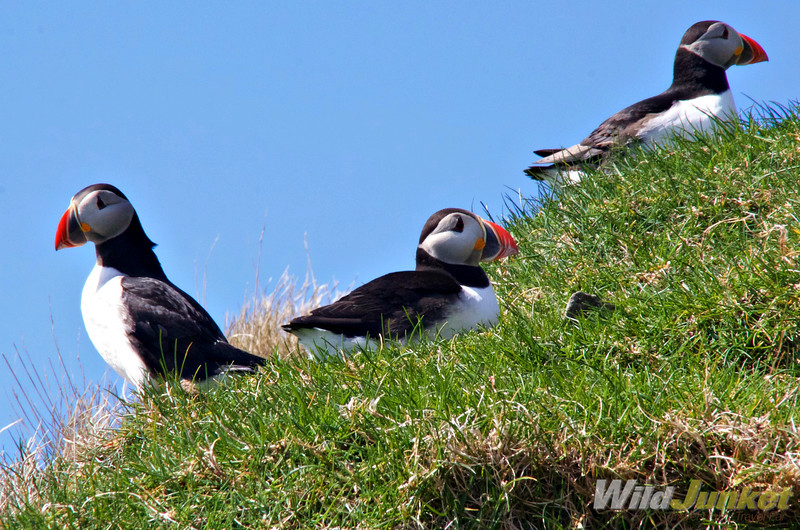 Located on the westernmost edge of the Faroe Islands, Mykines is home to the largest colony of puffins in the country. These small feathered animals reside all year round in the craggy sea cliffs on the northern side of the island.

Because of the Faroe Islands’ isolated position in the middle of the Atlantic Ocean, millions of birds come here each summer to breed. A total of 305 bird species have been recorded on the Faroe Islands – including Arctic skyas, kittiwakes, gannets, and shags.

Here on Mykines, puffins have been well protected and left undisturbed, so they aren’t afraid of human beings. Even when I approach quietly and sit just a meter or so from them, they don’t seem quite bothered. 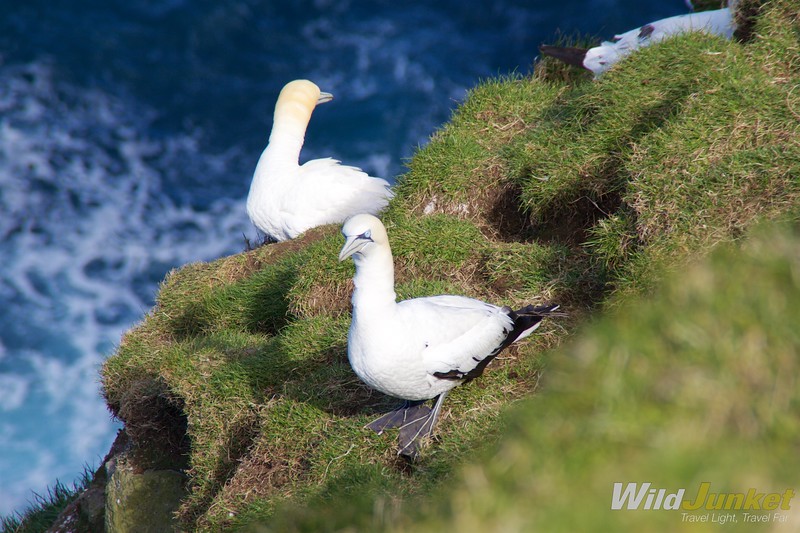 Mykines: Best Island to Visit in the Faroes

With a population of just 14 and with no roads on the island itself, Mykines feels extremely remote and far-flung. But it’s actually easily accessible, at just a hop away from the island of Vagar where the airport is located.

To get here, I caught a ferry from the town of Sorgavur (just next to the airport) and arrived here within 45 minutes. The popular ferry service to Mykines gets fully booked in summer and so does the helicopter service. Thankfully I had mine booked in advance.

Just as I landed on the rocky harbour of the island, the sun poked out cheekily from behind the clouds and made a stunning appearance. The weather had been fantastic all day, with the temperature just over 10 degrees Celsius — although it felt more like 15 under the sunshine. 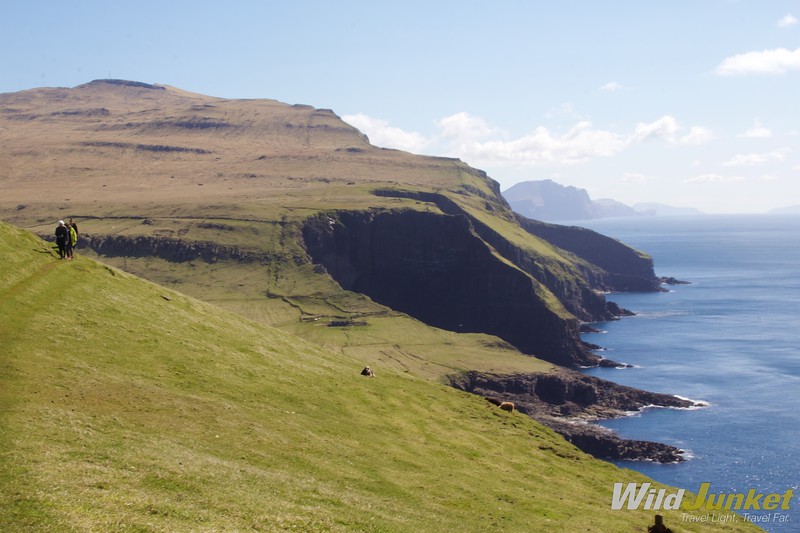 The first thing I looked for upon arrival was the trail head of the Mykineshólmur hike. This is a route that would take me to the lighthouse on the northern end of the island.

Along with a French hiker, I headed up a green hill that looked more like a farmland than a hiking trail. The green slope rose vertically up and we simply kept walking higher and higher. Eventually we got to a monument that was erected in honour of lost fishermen from Mykines.

The path continued higher and higher over a mountain ridge. It involved quite a lot of climbing up and down steep slopes. At times right along the edge of the craggy, vertiginous cliff faces (which can be tough for those with vertigo) – but we were treated to absolutely stunning views at every corner. 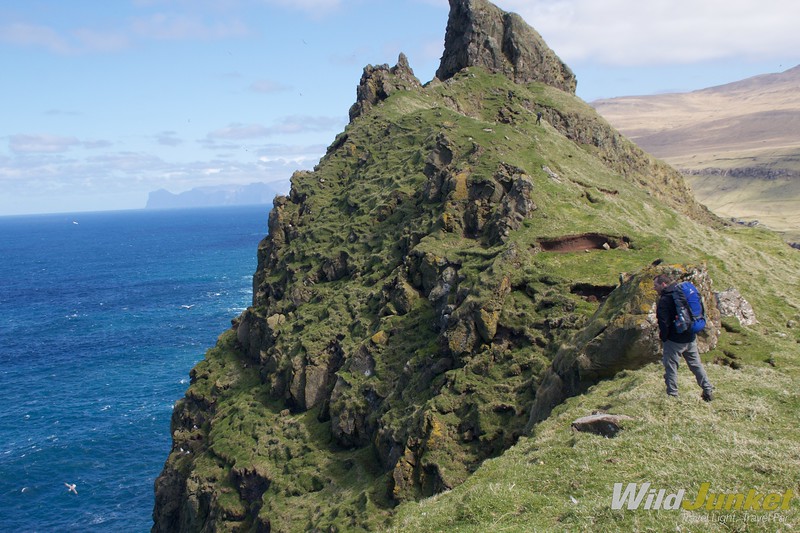 A Close Encounter with Puffins

Eventually the path descended down to í Lamba, one of the country’s richest puffin areas. More than a million puffins are said to breed here. They breed in colonies on the grassy, steep slopes where many of them have dug nesting burrows.

As I kneeled on the slopes to observe them, I could see hundreds, if not thousands of them nesting in their burrows. Deep grunting sounds “arrrgh-uh” were coming from the burrows. Some were laying their eggs, others were feeding their young, a few fighting amongst one another for food. 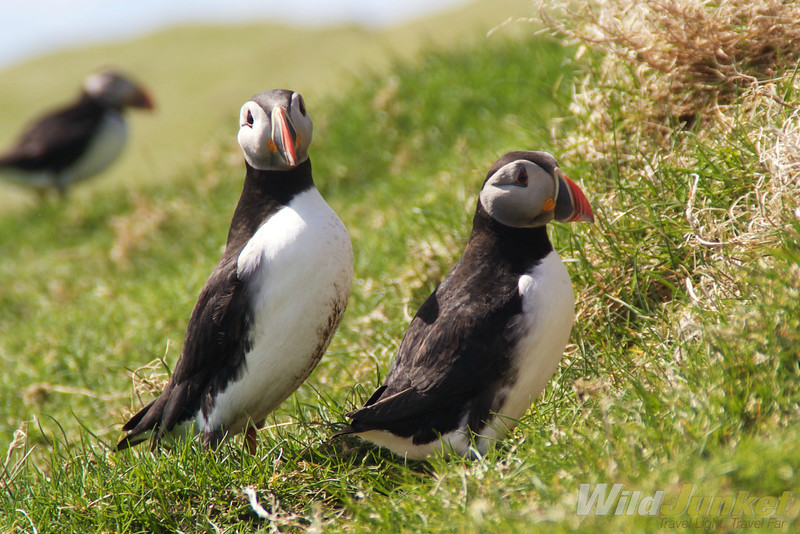 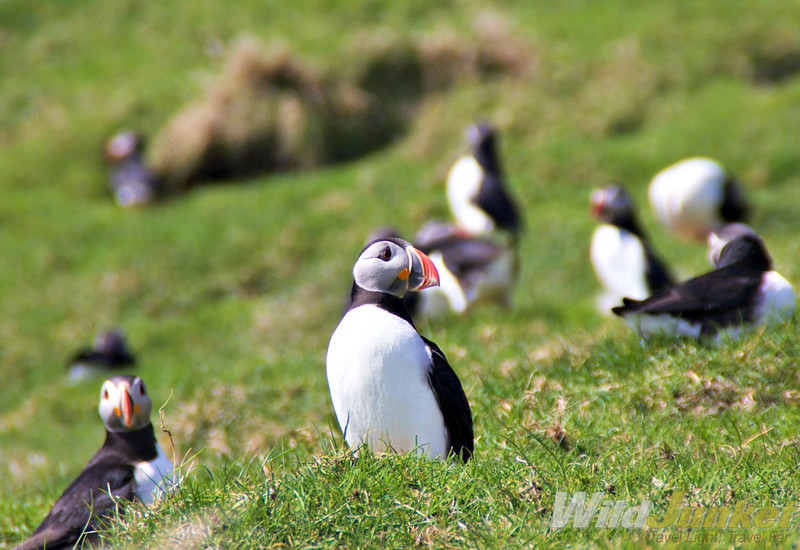 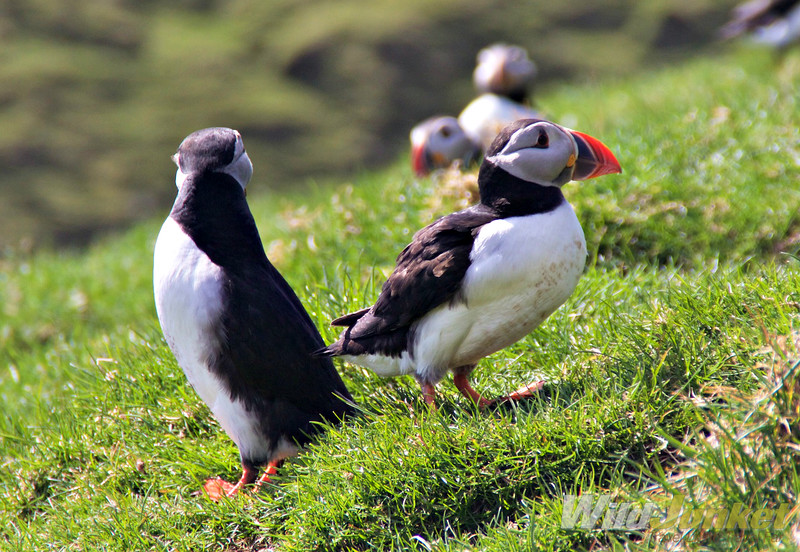 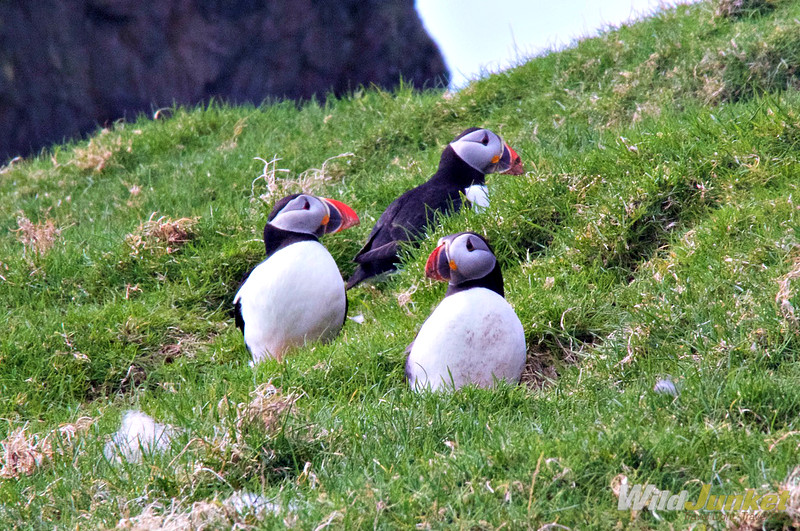 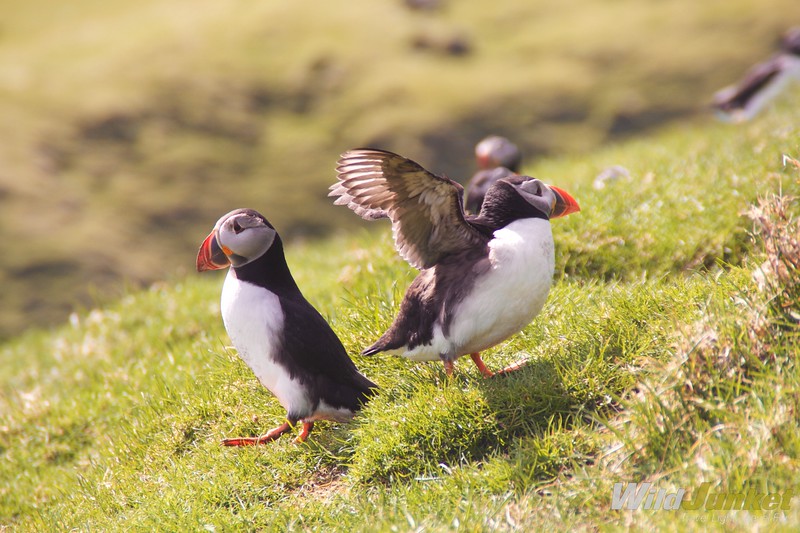 After observing them, it was easy to see why puffins got the nickname, “parrots of the sea”. These little creatures were indeed playful and boisterous, so cute and full of energy. I could have sat there for hours just looking at them. But I knew it was time to give them their privacy.

For those special moments, I felt privileged to peek into their lives and get so close to their colonies. Experiences like this are rare and I’ll always remember Mykines for this.

READ NOW
The Best Cities to Party in Europe 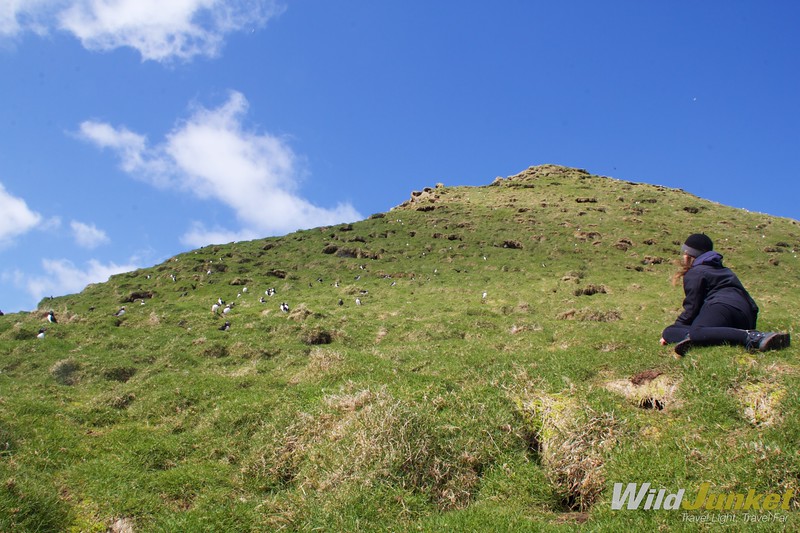 How to Get There:

Mykines is a 45-minute ferry or 10-minute helicopter ride. The ferry costs 120 krona (18 euros) return and helicopter is around 240 krona (36 euros). Try to book both early as spaces fill up fast in summer and there are limited seats on both the ferry and helicopter. The helicopter was filled up so I went on the ferry both to and from Mykines.

On the ferry, the waves can get quite choppy so take some motion sickness pills if you get seasick. You might get wet on the upper deck as well, but there is a comfortable lower deck where you can stay dry and warm. It’s a very scenic boat trip though. I stayed up on the upper deck the whole time and was just blown away by the views.

Once on Mykines, easy to find the hiking trail head from the map as you walk into the village. The hike takes around 3-hours round trip although you can easily take much longer. Especially when you’re taking photos every other second and watching puffins or simply admiring the view. It’s best to bring your own packed lunch and take your time to enjoy the hike. It’s definitely one of my favourite hikes in the world. 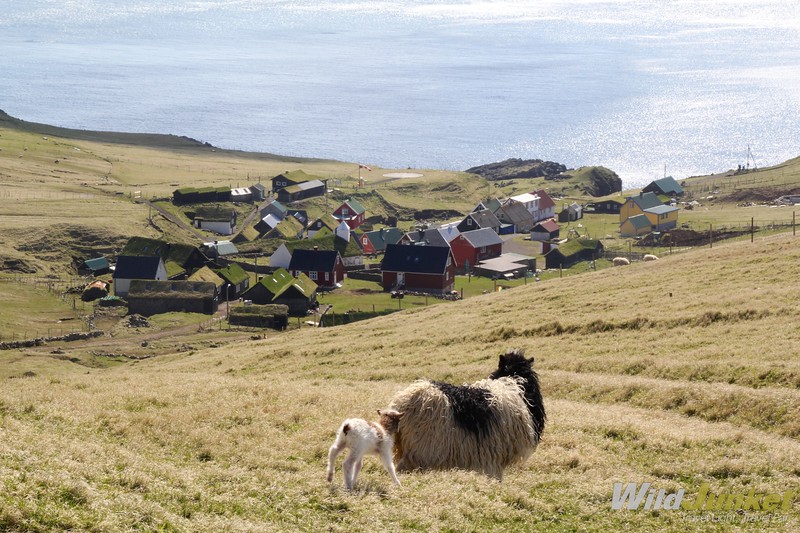 Disclaimer: Thanks to Visit Faroe Islands for assisting me with this trip! As always, my opinions expressed above are my own.