20 Photos of Georgia that Will Surprise You

Georgia — a name associated more with the southern state of US than the country itself, is often overlooked by travellers as a tiny landlocked country hidden in the shadows of its ex-Soviet past.

For the uninitiated, Georgia is a relatively small country in the Caucasus, midway between Europe and Asia. It is etched between Turkey and Russia, both giants in terms of size and wealth. As a result of its geographical location, the country has a compelling blend of European and Asian heritage, culture and food. Travel in the Caucasus is affordable, safe and easy (near both Europe and Asia), but the region is strangely not very popular among travelers.

Most people who have traveled the Caucasus like Georgia best, more so than Armenia and Azerbaijan. And it’s easy to see why. 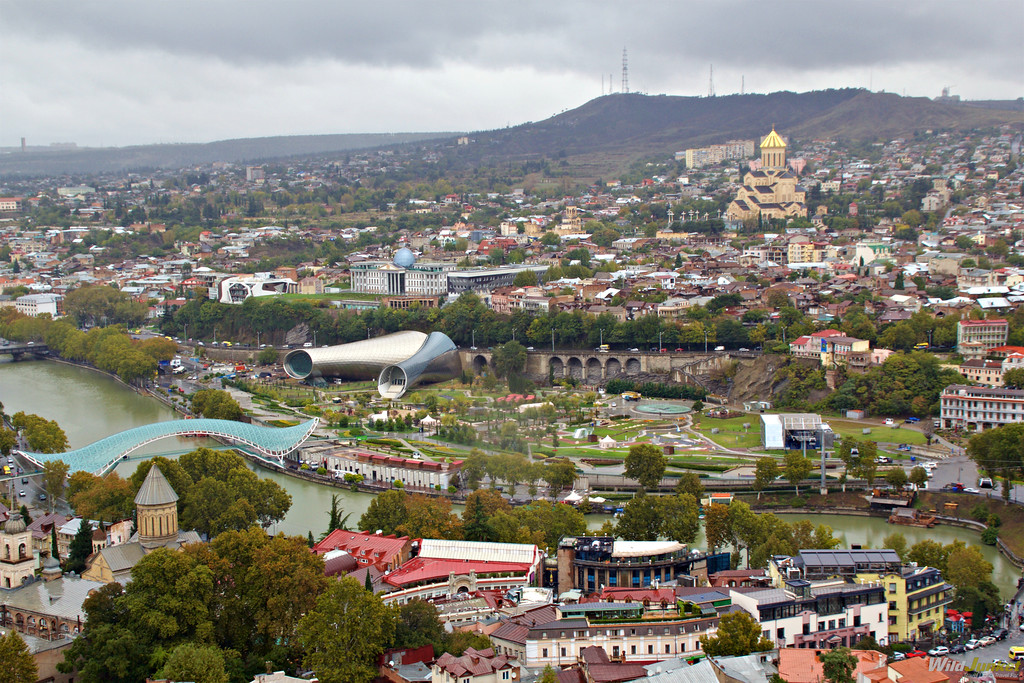 Why I Love Georgia

In general, Georgia is more European than Armenia or Azerbaijan, with postcard-perfect medieval towns that spot winding cobblestoned paths and creaking old buildings that have many stories to tell. The country has retained its historical heritage extremely well, with immaculately preserved 13th century Orthodox churches and monasteries, many of which hang from clifftops and perched high over medieval towns.

Add to that, Georgia is a country of natural beauty: unspoilt mountainscapes, snow peaks, steep ridges dotted with terracotta-roofed houses, and endless hiking trails that outdoor lovers all travel far and wide to seek out. And let’s not forget that Georgia is home to a bounty of amazing food and wine — it is after all, said to be the first country to have wine.

To show you why Georgia is worth visiting, here’s a look at some of my best photos of Georgia — shot in various parts of the country, from the capital city of Tbilisi to the spectacular Ananuri Fortress, the ancient town of Mtsekhta to the mountains of Kazbegi. 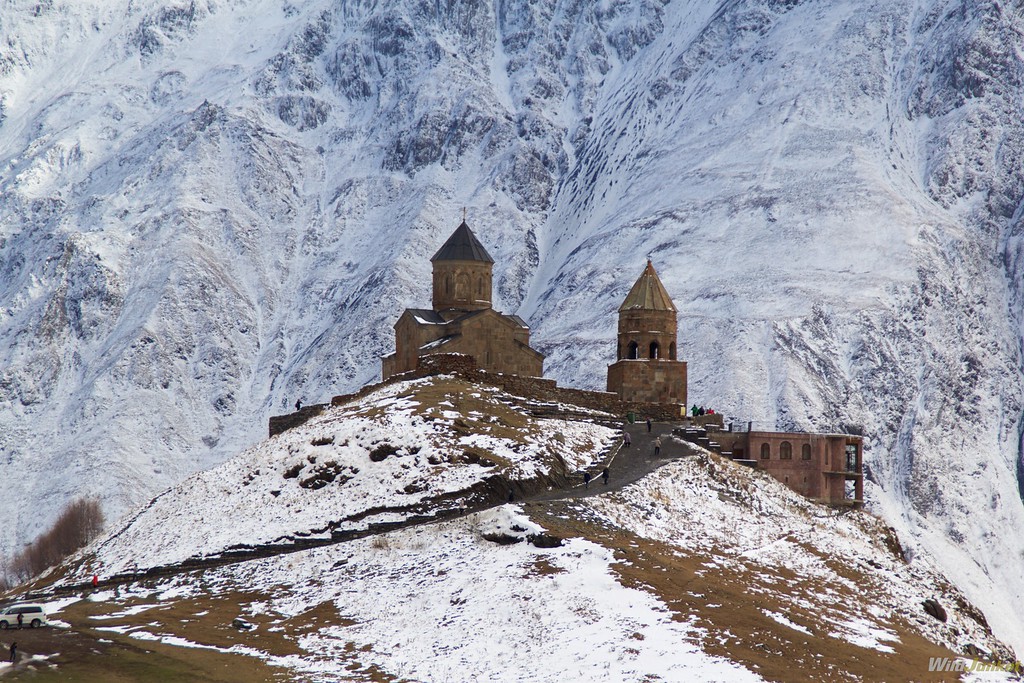 My absolute favorite moment of my Caucasus trip was going up to the Gergeti Church, built 2,200m above sea level, on top of a peak in the Kazbegi Mountains. As part of the Great Caucasus Range, the peaks here reach up to almost 5,400m in altitude. The church was built in this inaccessible, secret location in the 14th century to hide treasures and holy relics. To get up here, we hired a jeep that took 30 minutes to climb up the narrow, muddy trails (otherwise it takes three hours on foot to hike up). 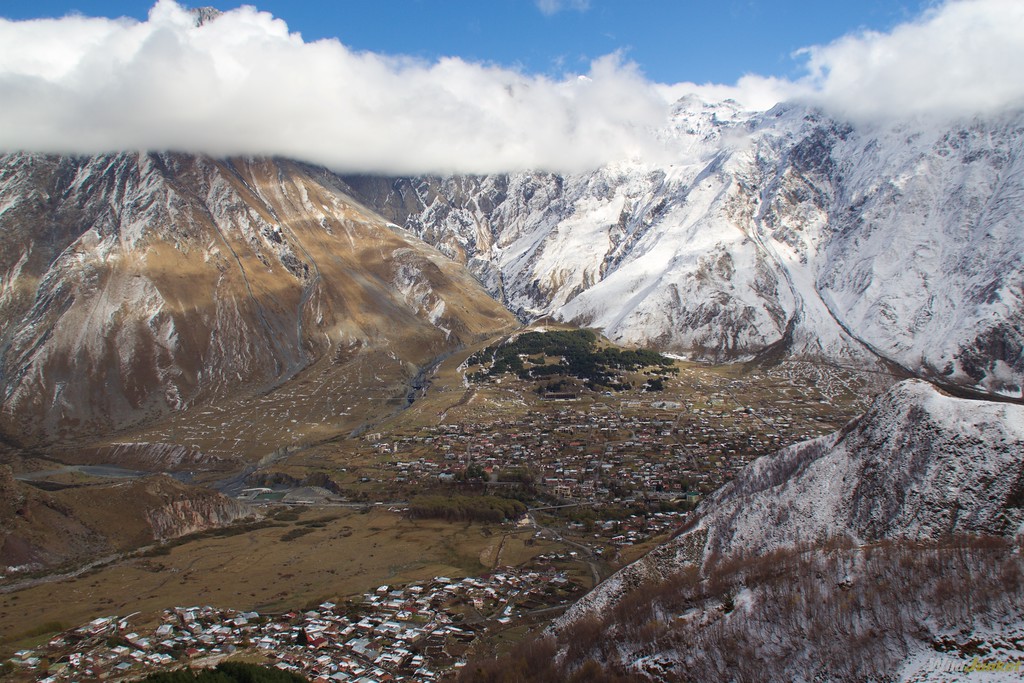 The view from the Gergeti Church down to the town of Kazbeg (locally known as Stepantsminda) and village of Gergeti is pretty awe-inspiring. It makes you wonder how the hell the builders managed to build this piece of art here on the top of a peak. 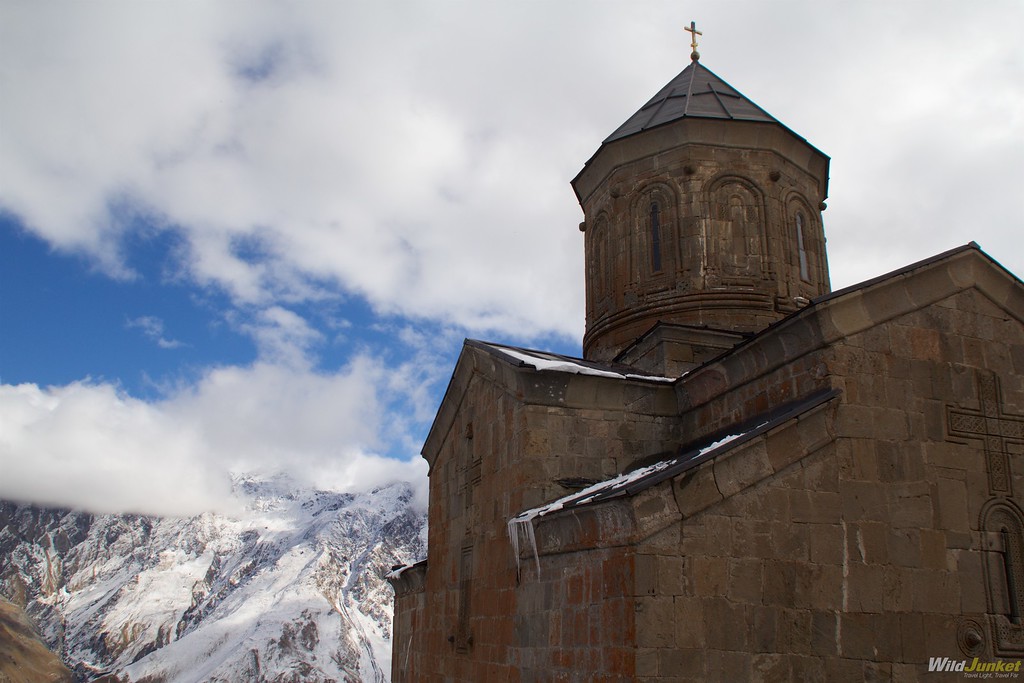 The church itself is quite small, and features the same architectural style as most Armenian churches. Inside is rather plain as well, as with most churches in Armenia (they believe that frescoes or paintings will distract the worshipper.). 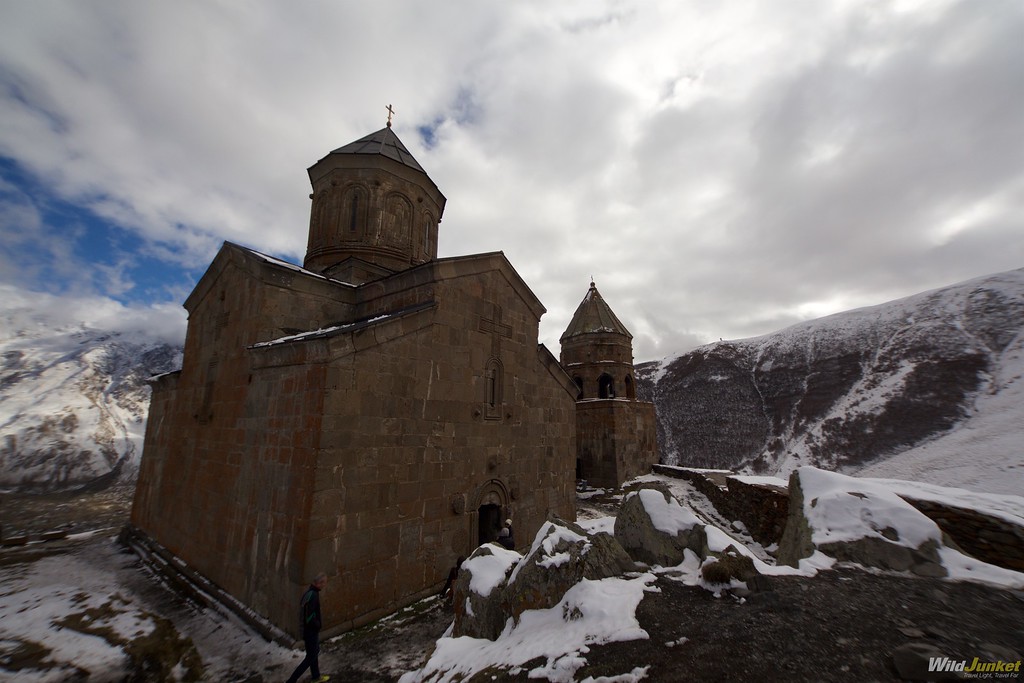 A priest looks after this church and stays here on its grounds even in winter. Life must be quite hard for him. Just imagine! 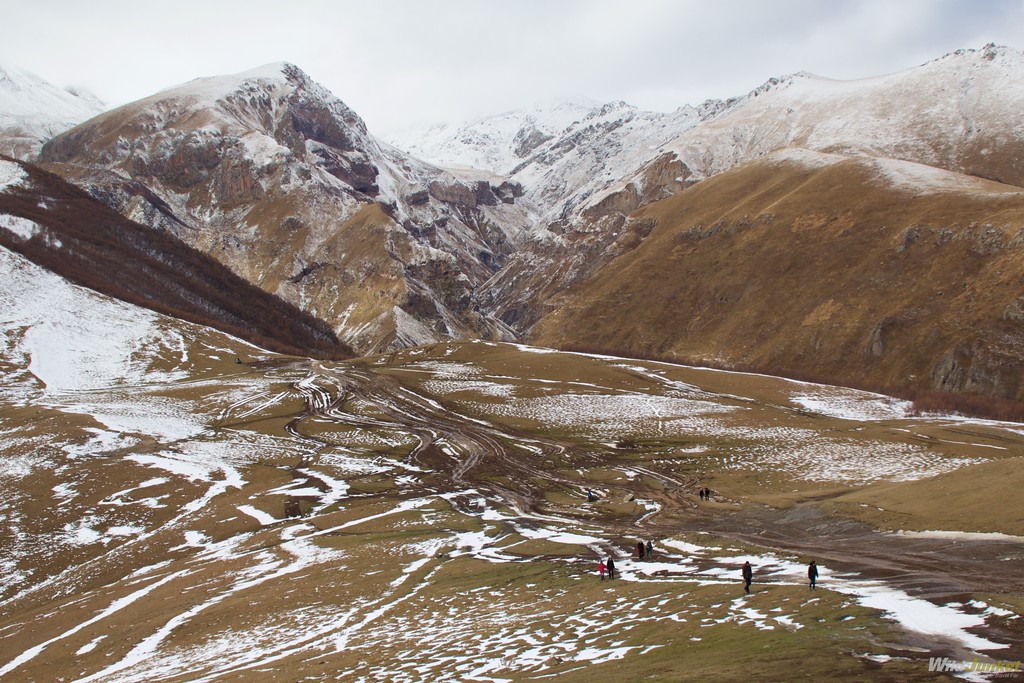 The trail that leads up to the Gergeti Monastery. It can get quite muddy up here, depending on weather conditions. We were lucky that it wasn’t snowing on the day of our trip, otherwise we wouldn’t have been able to get up here. 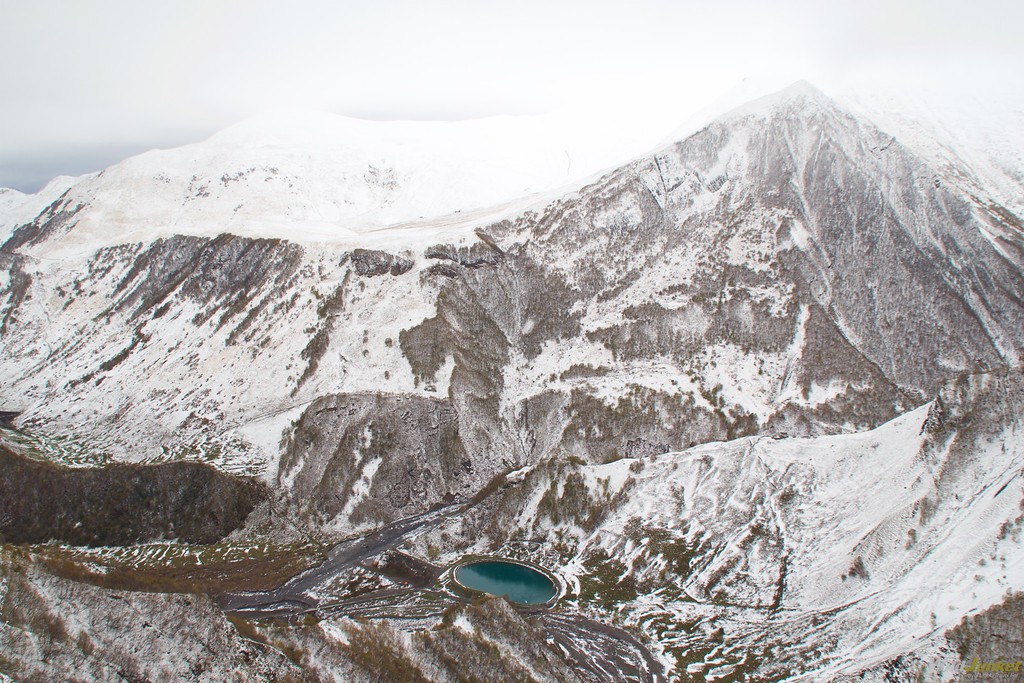 To get to Gergeti Monastery, we drove along the winding Georgian Military Highway that snaked its way steeply up the mountains and all the way into Russia. We made a stop at Gudauri Ski Resort, an alpine town built by the Swiss. 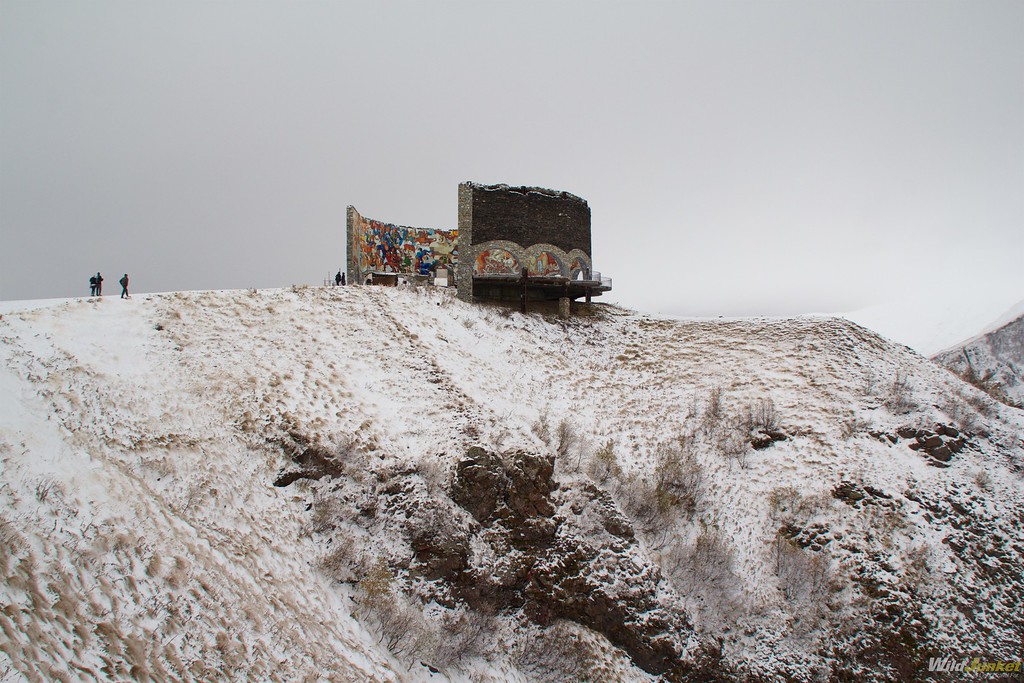 This is the Friendship Arch built by the Russians during Soviet times and stands right along the Georgian Military Highway. The Russians built the highway as well to connect Georgia to Russia and even until today the road is used frequently by cargo trucks transporting goods from Russia to Georgia and vice versa. 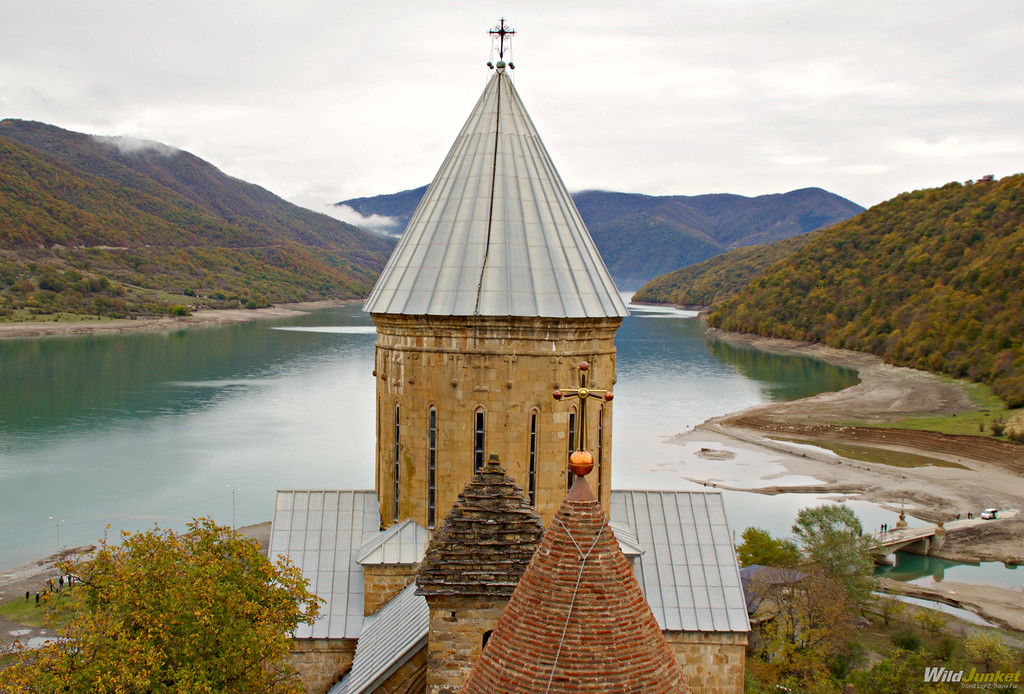 One of the most scenic Georgian buildings is the Ananuri Fortress, a castle complex on the Aragvi River just 45 miles (72 kilometres) from Tbilisi. We arrived on a gloomy morning, with the clouds hanging low. The water was so still and calm and the fortress stood regal and imposing over it — it felt like a fairy tale setting.

READ NOW
20 Best Things to do in Mykonos, Greece 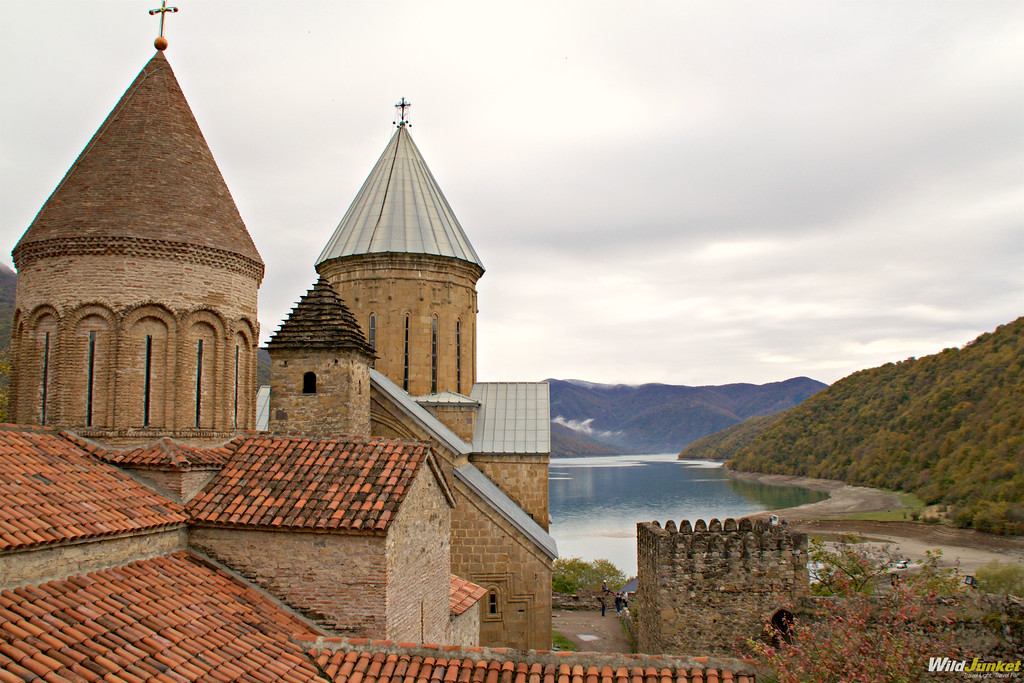 The 13th century building hasn’t been completely restored, so there are still parts of it that are crumbling and falling apart. However, you can actually climb its watch tower up to a viewpoint to get this beautiful panorama of the Aragvi River. 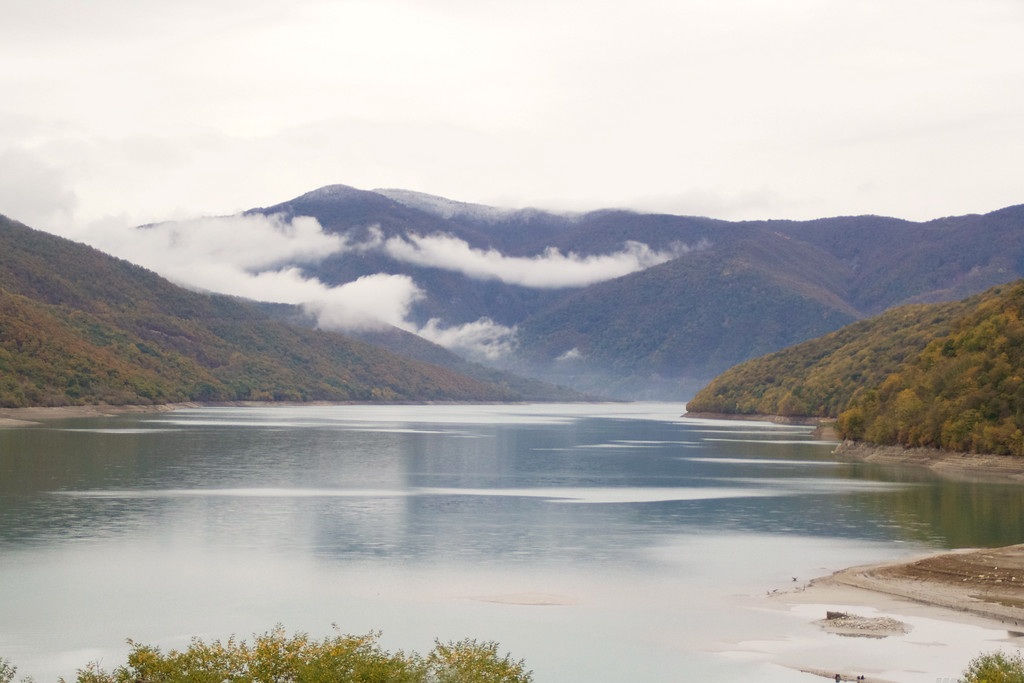 The Aragvi River is one of the longest rivers in Georgia and flows all the way down to the town of Pasanauri.

The Georgian capital city of Tbilisi is way bigger than I expected, but its old town is a charming, whimsical collection of churches, terracotta-roofed houses, cobblestoned streets and old bridges. There are however several ultra-modern buildings in the mix, such as Rike Park. There are so many things to do in Tbilisi that you’ll need at least a week to experience the city. 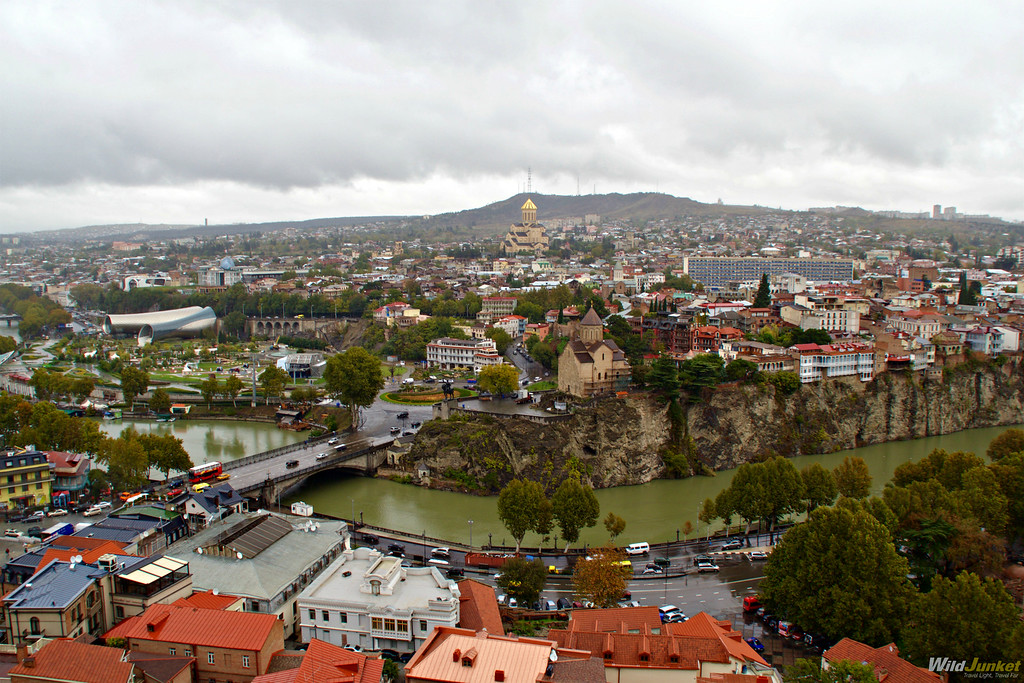 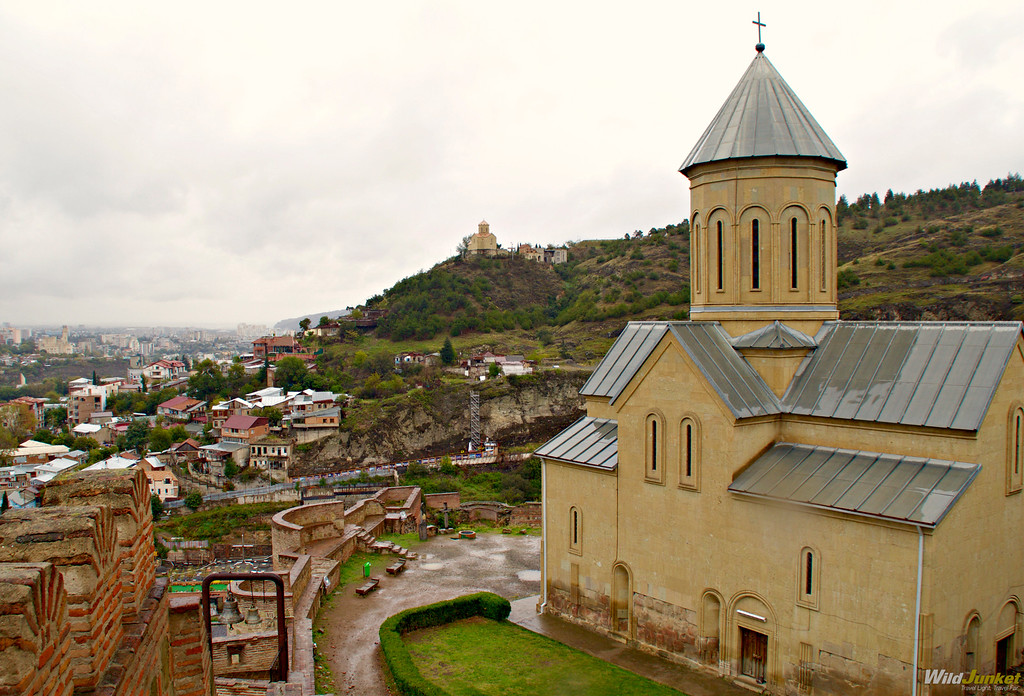 Dating all the way back to the 4th century, Narikala is an ancient fortress overlooking Tbilisi. The fortress consists of two walled sections on a steep hill between the sulphur baths and the botanical gardens of Tbilisi. On the lower court there is the recently restored St Nicholas church. 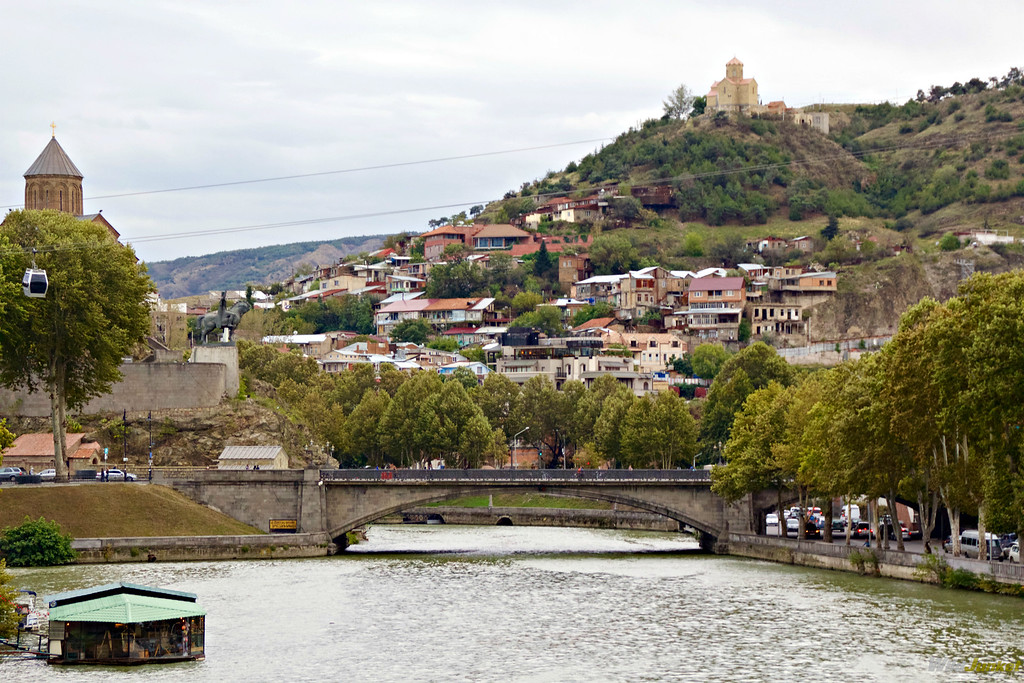 Tbilisi is built parallel to the Kura River, which runs along the length of 1.5km. Starting from northeastern Turkey, the river flows through Turkey to Georgia, then to Azerbaijan. 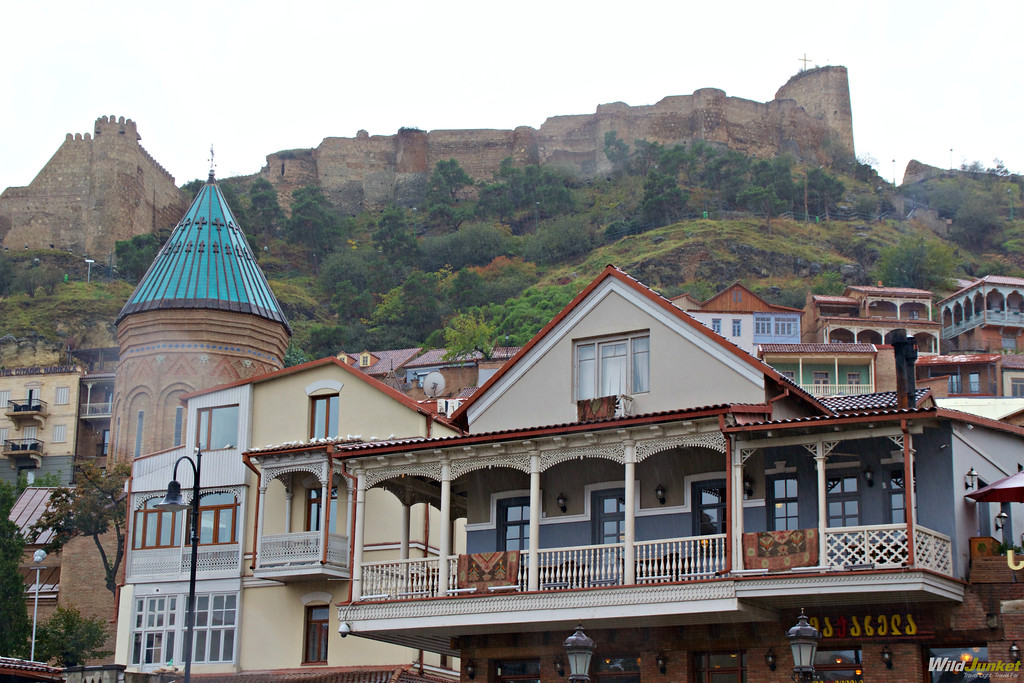 Tbilisi Old Town is a labyrinth of narrow streets where wooden balconies look down from old brick-build homes. Doorways lead to hidden courtyards an ancient vines climb to the skies using anything vertical for support. Parts have been comprehensively renovated, arguably a little too enthusiastically, so that some streets look like a Disney film set, though far more of these twisting alleys are untouched. 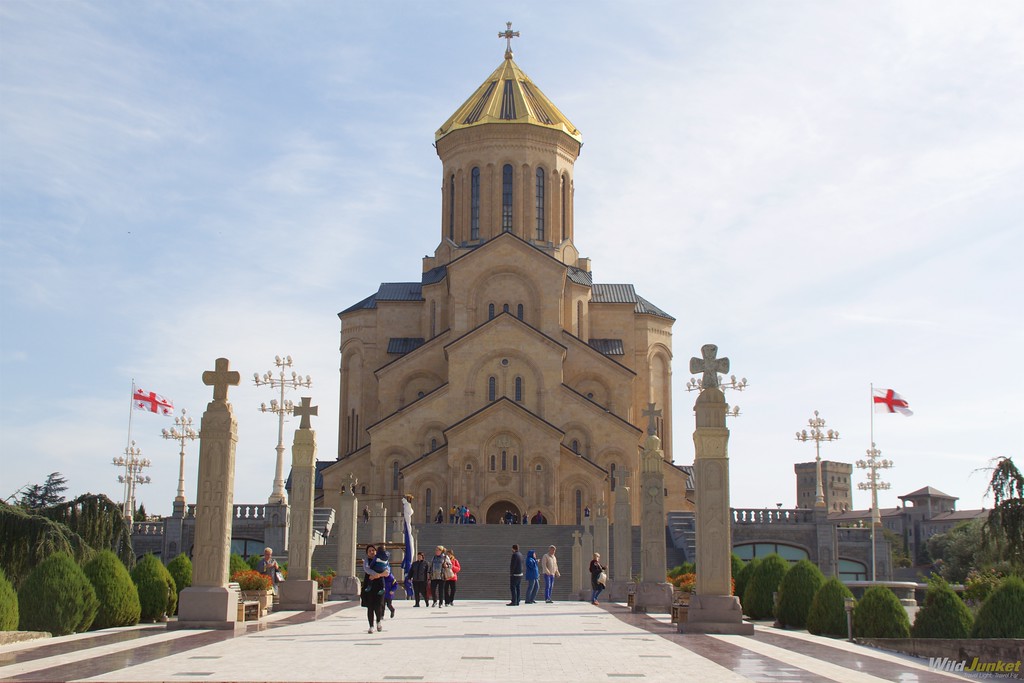 Holy Trinity Cathedral of Tbilisi is the main cathedral of the Georgian Orthodox Church. Constructed between 1995 and 2004, it is the third-tallest Eastern Orthodox cathedral in the world and one of the largest religious buildings in the world by total area. 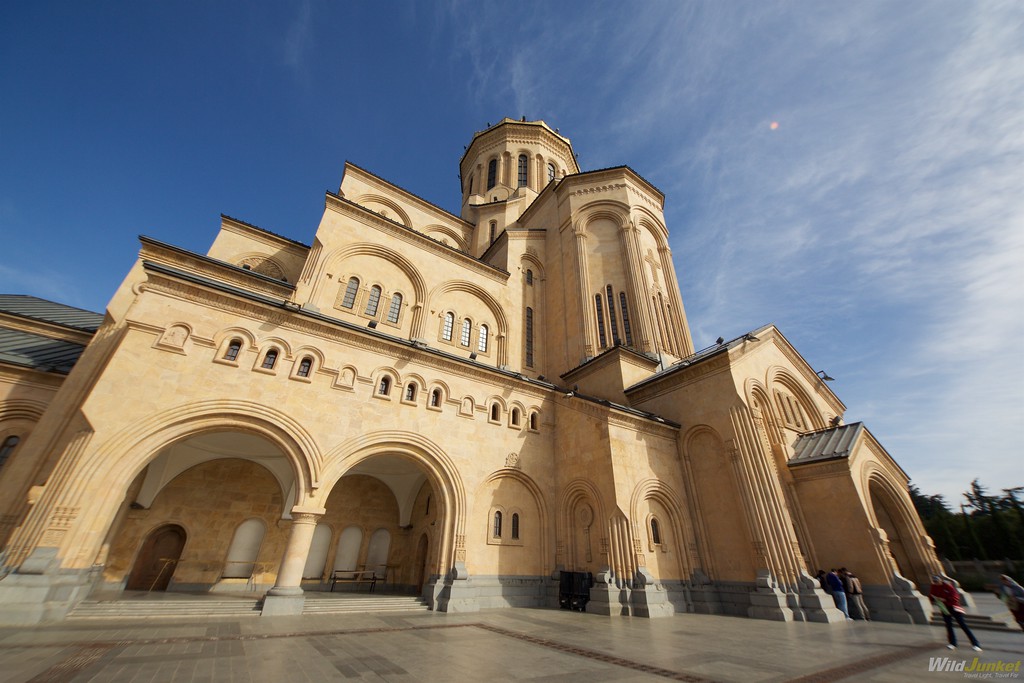 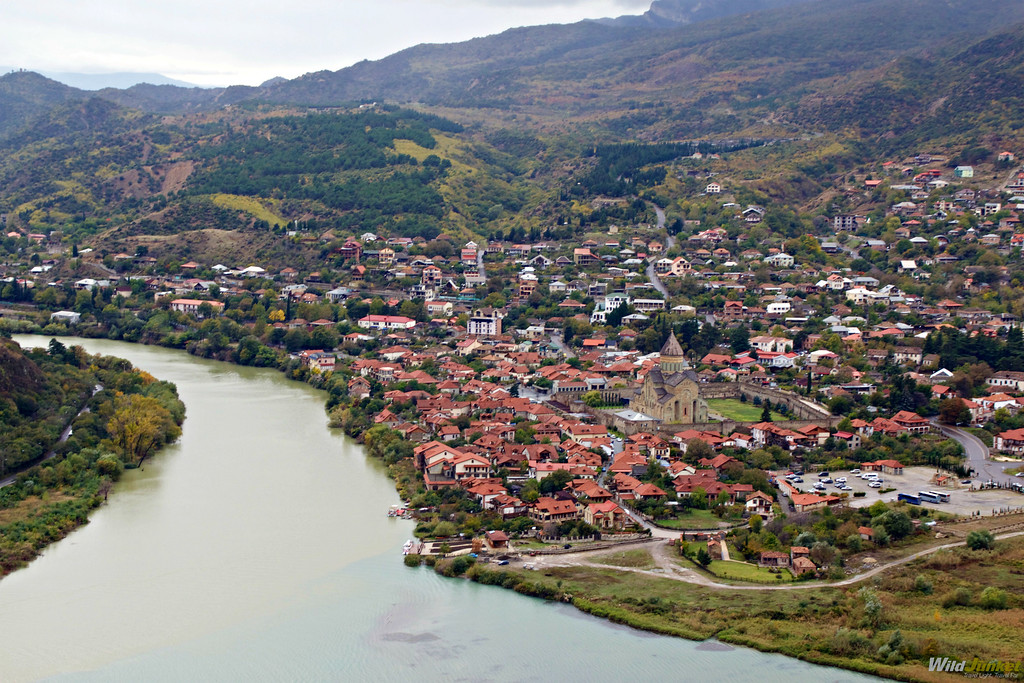 One of the oldest cities of Georgia, Mtskheta is the ancient capital of the country and is located approximately 20 kilometres (12 miles) north of Tbilisi at the confluence of the Aragvi river. As the birthplace and one of the most vibrant centers of Christianity in Georgia, Mtskheta was declared as the “Holy City” by the Georgian Orthodox Church. 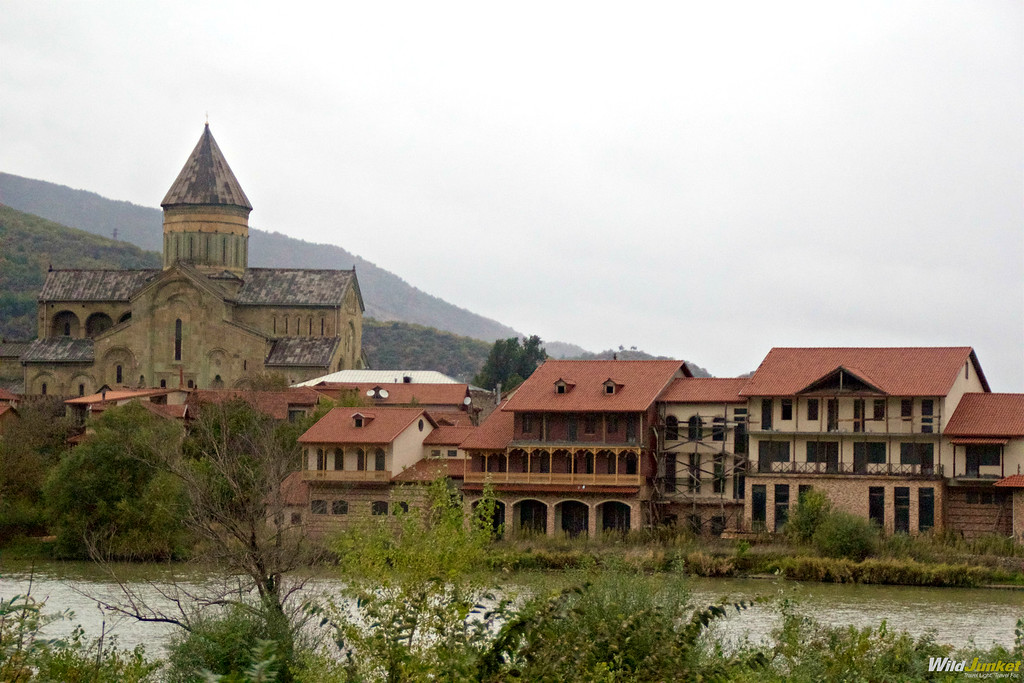 Mtskheta is built on the banks of the Aragvi River, which also flows past the Ananuri Fortress. 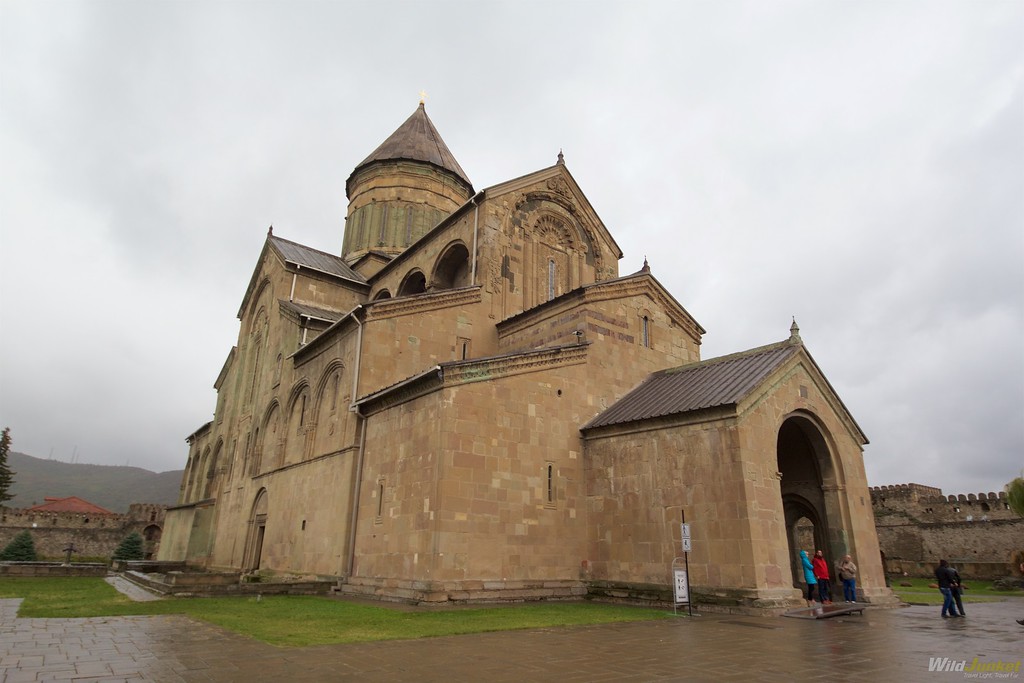 What used to be the biggest church in Georgia, Svetitskhoveli Cathedral is located in Mtskheta, and is recognized by UNESCO as a World Heritage Site. Known as the burial site of Christ’s mantle, Svetitskhoveli has long been one of the principal Georgian Orthodox churches and is among the most venerated places of worship in the region. 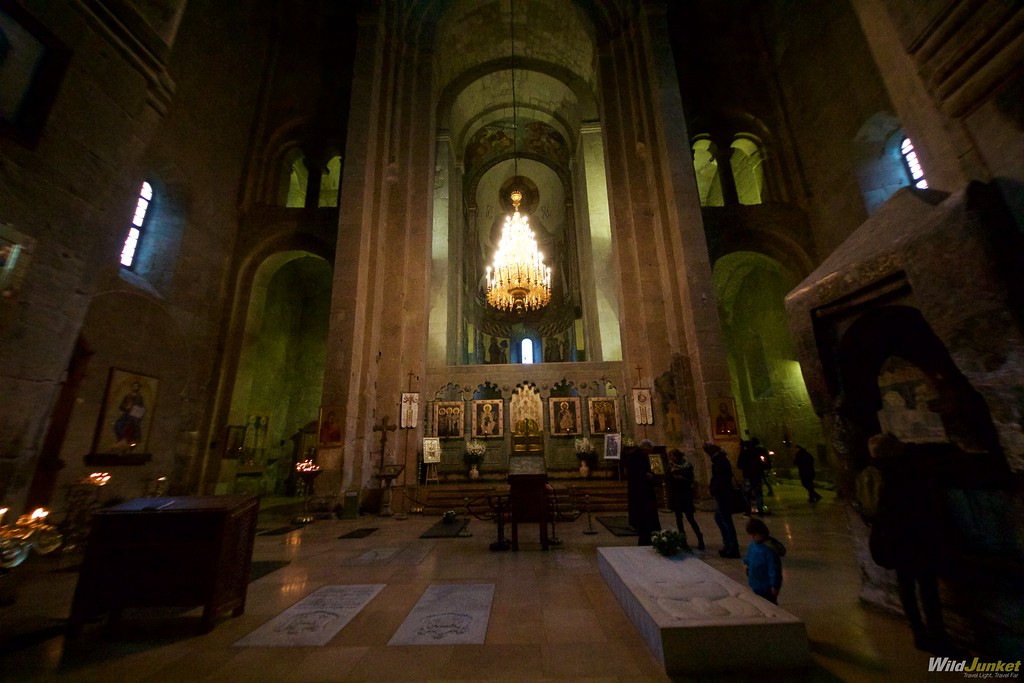 A look inside the Svetitskhoveli Cathedral.