10 Best Things to Do in Granada, Spain

Having lived in Granada, Spain for over 7 years now, it’s time to share all we know and love about this beautiful city. Here are the best things to do in Granada!

I might be biased, but I think Granada is one of the most beautiful places in Europe. The bohemian city, sprawled at the foot of the Sierra Nevada, was the last stronghold of the Spanish Moors and their legacy lies all around: in the historic Arab quarters, the landscaped gardens, and aromatic spice market.

Perched on a hilltop, the old town, also known as Albayzin, is a hodgepodge of white-washed houses, lavish gardens and cobblestone alleys, with plenty of secret corners to be unraveled.

But Granada doesn’t just offer beauty: It’s also a great place to live for its affordable prices, vibrant Spanish tapas culture and lots of nature surrounding it. Having lived here for so long (and my husband’s from here), I consider myself a Granada expert. Here’s my list of fun things to do in Granada, Spain.

Best Things to Do in Granada Spain

Looming over the city is the world-famous Alhambra Palace,  an impressive display of the Islamic Umayyad architectural style. Dating back to the 9th century, the Alhambra was originally constructed as a small fortress in 889 and then rebuilt in the mid 11th century by a Moorish king who built its current palace and walls, and later converted into a royal palace in 1333.

It takes more than a day to see the entire Alhambra Palace. Its hundreds of rooms, courtyards and patios are decorated with intricate carvings and high ceilings while its garden – the Generalife – is a sprawling maze that is a piece of art on its own. Only a limited number of visitors are allowed each day, so make sure to book your tickets in advance! The nature in Granada is stunning, and the Carmen de los Martires Gardens are the perfect way to experience it. Close to the Alhambra, this lush garden is not a very busy spot and it’s a great way to sit back, relax, and breathe some of the fresh mountain air in Granada. There’s also a tower in the gardens that you can go up and see a beautiful view of the city.

3. Get Lost in Albayzin

Albayzin is a hodgepodge of white washed houses, pine tree gardens and cobblestone alleys all stacked up on one hill overlooking Granada. Its charm is undeniable and plenty of visitors choose to stay in this part of town to soak in the history of the city. I think many would agree Albayzin is the most beautiful part of Granada.

Be warned though, there are plenty of steps and slippery cobblestoned paths. Wear sturdy shoes and prepare to spend hours wandering all over the neighborhood. The best time to visit is in the morning (before 12pm) and evening (around 5pm) if you’re visiting Granada in summer. It can get extremely hot during midday and it’s best to avoid walking under that heat. 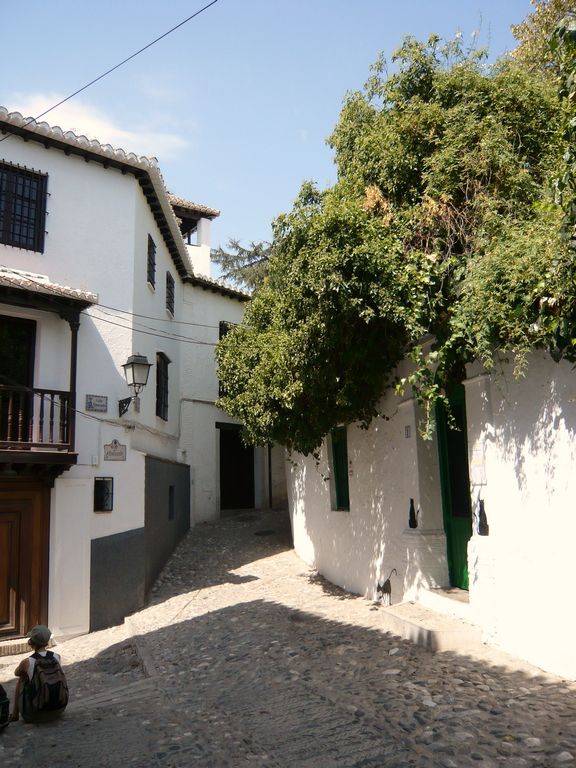 4. Feast on the Views at the Mirador de San Nicolas

The Mirador de San Nicolas is a viewpoint that is perched on the highest point of Albayzin, offering unobstructed views of the Alhambra and the rest of the city beneath. This may be an extremely touristy spot, but the view is well worth it and atmosphere here infectious.

Hundreds of tourists sit by the ledge and drink in the view, while gypsy street artists strum their Spanish guitars and hippies sell their handicraft. One of my favorite bars in Granada is located right below the Mirador: Huerto de Juan Ranas has a spectacular view and atmospheric open roof bar.

5. See a Flamenco Show in Sacromonte

Sacromonte is Granada’s gypsy quarter, on the hills above Albayzin. This is the birthplace of the zambra, an intense form of flamenco. Most caves in the area have nightly flamenco shows, though you might see street performances if you’re lucky (though the real artists would sneer at them). I usually bring friends from out of town to Cuevas los Tarantos, where a dimly-lit atmosphere and authentic beats set the scene for an unforgettable evening.

The Granada Cathedral, also known as Cathedral of the Incarnation, stands in the arterial heart of the city. The Cathedral had been intended to become the royal mausoleum by Charles I of Spain, but his son decided to move it to El Escorial outside of Madrid. The main chapel  now contains two kneeling effigies of the Catholic King and Queen, Isabel and Ferdinand.

The bell tower of the Cathedral can be seen rising above the buildings in Granada’s city center. The buildings have to abide by the city’s maximum height limit due to the risk of earthquakes in the area.

7. Stroll through the Alcaiceria Market

Right next to the Granada Cathedral is the Alcaiceria, a maze-like market that resembles a Moorish souk with rows upon rows of shops and souvenir stores. In the Alcaiceria, you will find a flurry of Moroccan lamps, handwoven rugs and leather bags that all evoke flavors of North Africa. This is a great place to wander around and get lost.

8. Hang Out at Bib Rambla Square

Plaza Bib Rambla is another one of the many squares in the Granada city center where festivals are often celebrated. During Christmas, there’s usually a market in this square, with an enormous Christmas tree in the center of it all. Also located close to the Cathedral, this square is flanked by several restaurants and bars as well as ice-cream shops and souvenir stores. The restaurants tend to be tourist traps though, so I recommend avoiding them. You don’t have to walk far from Granada’s city centre to find yourself in the countryside. You can literally walk up the steps of the Albayzin to find yourself surrounded by rolling hills and hiking trails. Many trails in Cumbres Verdes and Llano de la Perdiz are just 20 minutes away from the city center and they bring you around the olive groves and rolling hills surrounding Granada. We love going out for a hike every other weekend to leave the city behind and find some peace and tranquility.

10. Enjoy the Free Tapas in Granada

Spanish tapas are renown around the world for good reason. These bite-size appetizers pack in all the goodness of fresh Spanish ingredients. They are simple and unpretentious, and are a perfect representation of Spanish cuisine. Best of all, most bars in Granada serve free tapas when you order a drink. Yes you heard me right. They come for free!

As Granada is a university town, there has always been this tradition of serving free tapas with drinks. Beer or wine usually cost 2.50 to 3 euros each, and that comes with a small platter of tortilla de patata, berenjena con miel or carne con salsa.

Some of my favorite tapas bars in Granada include La Botilleria, Taberna La Tana, and Los Diamantes (best seafood in town). Trying popular Spanish food is definitely one of the best things to do in Granada! And if you like cooking, check out these traditional Spanish recipes. 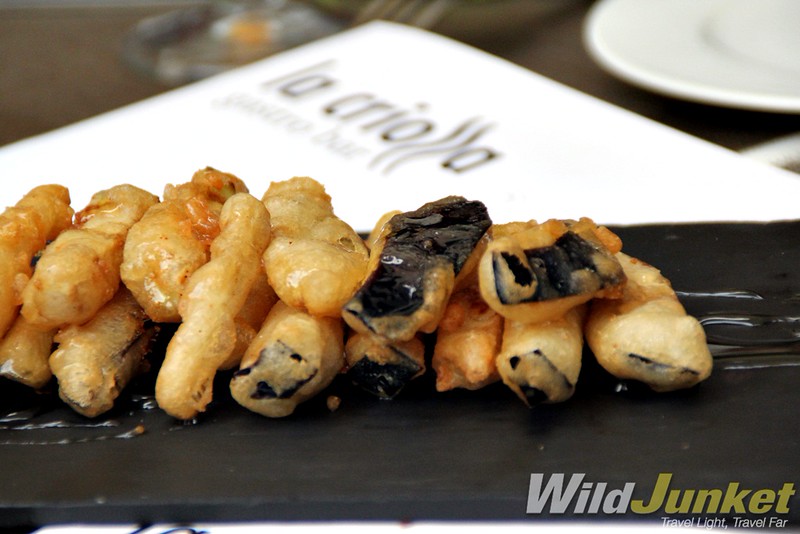 How to Get to Granada

From Malaga, the easiest way to get to Granada is to rent a car. I always use Discover Cars to book car rental, as they’ve consistently given me the best rates and customer service. You can get car rentals for as cheap as $40/day in Spain.

Another convenient way to get to Granada is by taking the bus from Madrid or Malaga. ALSA has bus services from many Spanish cities to Granada. Their buses are very comfortable and punctual. Note that the bus terminal in Granada is about a 20-minute walk from the city center. Where to Stay in Granada

I recommend staying in the Albayzin area, the oldest and most iconic neighborhood in Granada. It’s built on a hilltop, with whitewashed houses and cobblestoned alleys revealing dramatic views of the Alhambra at every turn. For a unique experience, you can also stay in a cave in Sacromonte in the hills above Albayzin, where Romani gypsies live and perform flamenco.

A tastefully restored riad in the Albayzin , this charming hotel has a central location , nice views of the Alhambra and great prices.Check prices here.

With astounding views of the Alhambra, this charismatic historical hotel has a romantic ambiance and gorgeous decor. We stayed here on our wedding night! Check the rates here.

Set within the grounds of Alhambra, the Parador lets you experience how it’s like to live in a palace and world heritage site. Undoubtedly the best hotel in Granada. Check rates here.

There are plenty of things to do in Granada, Spain to keep you busy for a week! I hope this guide has been useful for you. If you’re planning to travel to other parts of Spain, here are more articles that might be useful:

Did we miss out anything on this list of things to do in Granada? Let us know in the comments field below if you have any questions and we’ll be happy to help you out!