The streets of Ubud are filled with hundreds of people – all dressed in multi-hued, kebaya blouses and batik-print sarong cloth wrapped around their waists. Priests clad in pure white garments chant alongside the traditional gamelan music. Parading amongst them is the barong figure, a mythical lion/dragon creature highly revered in Bali.

It’s the eve of Nyepi, the Balinese New Year — the most important festival of the year for the Balinese. Also known as “Day of Silence”, Nyepi is a day of reflection, silence, fasting and meditation with the purpose of returning to pure spiritual harmony. On the day itself, no activity is allowed on the streets and even tourists are not supposed to leave their hotels (even the airport is closed); but the days leading up to it and after it are filled with parades, parties and family gatherings.

Many travelers avoid coming to Bali for Nyepi, but in my opinion, it’s one of the best times to visit as you truly get a taste of the Balinese traditions at this time of the year. It was a coincidence that we were in Bali during Nyepi, the Balinese New Year, (which fell on 28 March in 2017) but we really couldn’t have ask for a better chance to immerse in local culture.

READ NOW
20 Best Things to do in Bali Beyond Kuta 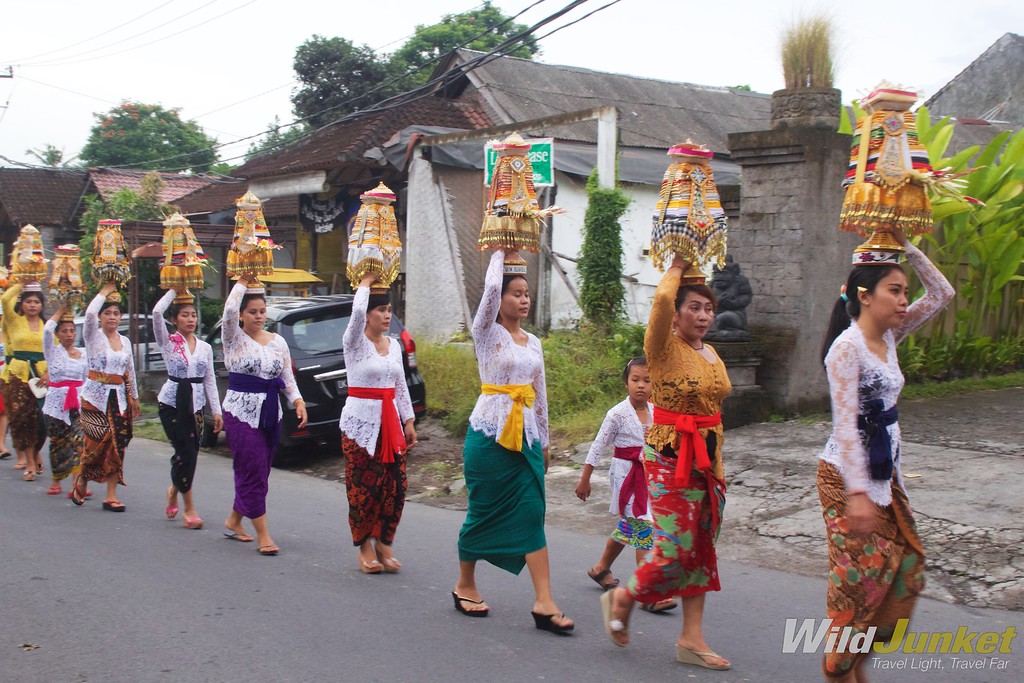 Unlike the rest of Indonesia (which is predominantly Muslim), Bali is largely Hindu.

Hinduism came to Indonesia from India, but was gradually replaced by Buddhism and then Islam from the 14th century. However, due to Bali’s entrenched culture of isolationism and other historical factors, Bali is the only part of Indonesia to remain predominantly Hindu.

Balinese Hinduism is slightly different from the main form of Hinduism in India  as it incorporates local animism, ancestor worship and reverence for Buddhist saints. Along with the typical Hindu gods like Brahma, Balinese Hindus worship a range of deities unique to their branch of the religion.

Nyepi is actually a Hindu festival that marks the start of the Balinese Saka year, which falls in March (on a different date) each year according to the Balinese calendar. Nyepi is primarily celebrated by the Hindus, but non-Hindu residents and tourists are not exempt from the restrictions. No one is allowed onto the beaches or streets. The only exceptions granted are for emergency vehicles responding to life-threatening conditions and women about to give birth. 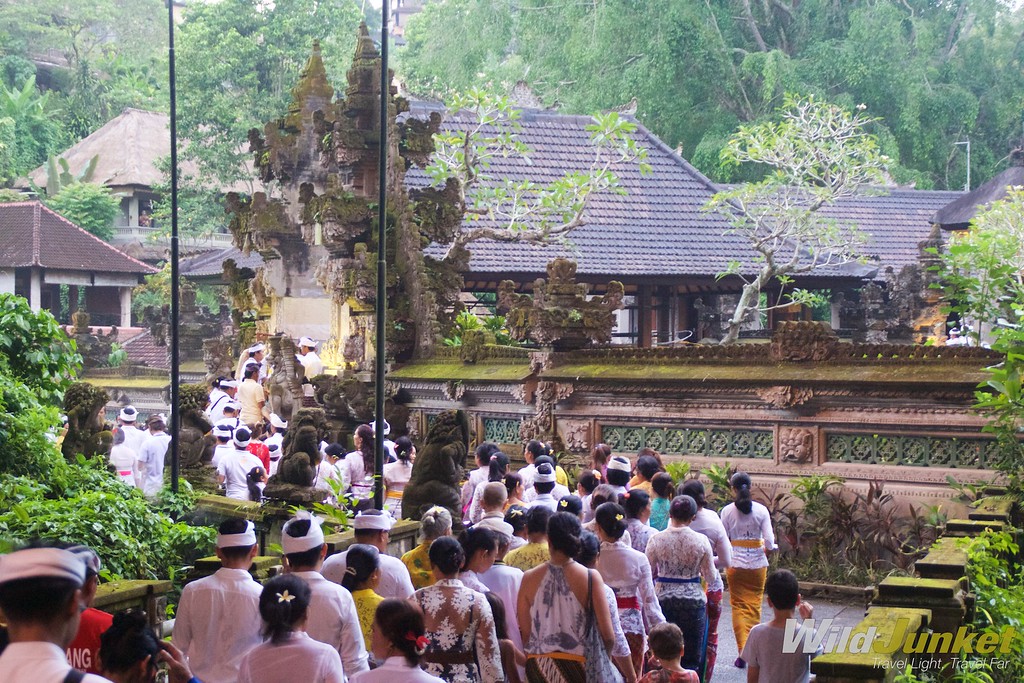 Ubud: One of the Best Places to Celebrate Nyepi

Nyepi is widely celebrated across Bali, but the biggest and most spectacular celebrations take place in the capital city Denpasar. That’s also where you’ll find the biggest crowds and chaos. We chose to head to Ubud instead, where processions and celebrations are just as impressive but crowds are lesser.

Located in Central Bali, Ubud is a spiritual arts hub located amidst rice paddies and steep ravines. There are some remarkable architectural and many historical temples and sights to be found, and a general feeling of well being to be enjoyed, all thanks to the natural landscapes and climate of the place.

Ubud’s popularity is growing exponentially, adding on the hoopla created by the bestselling “Eat, Pray, Love”.  Growth continues apace, but there are still terraced rice fields along the rivers, and away from the town centre, quiet village life carries on relatively undisturbed. 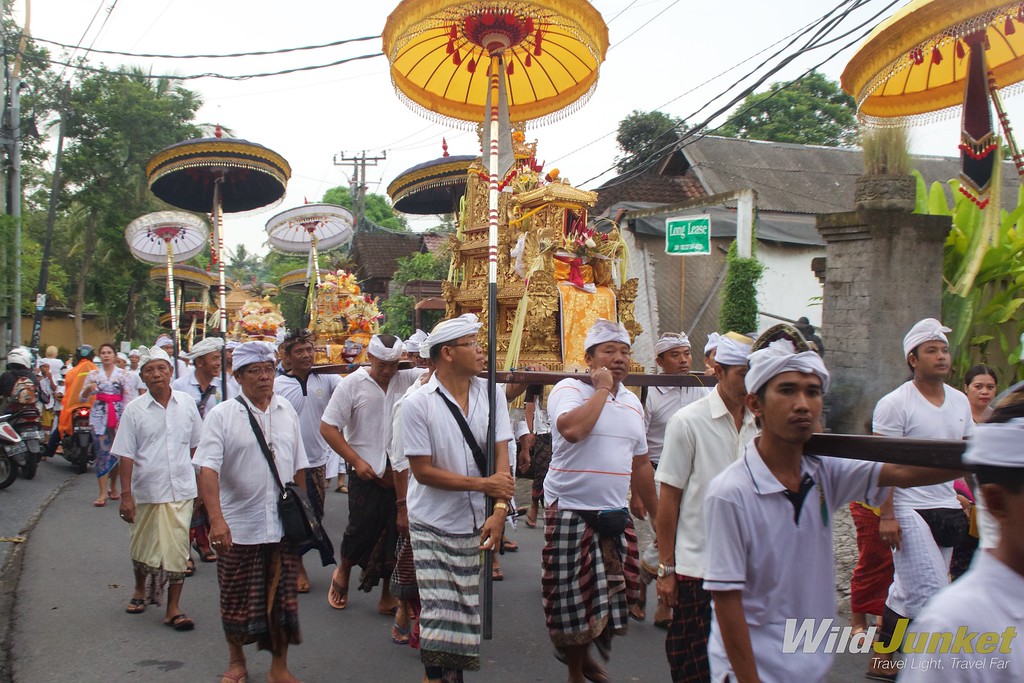 Days Leading up to Nyepi

We arrive in Ubud just two days before Nyepi day, to find a procession taking place just outside our hotel in the village of Penestanan. The air is filled with a positive atmosphere and the mood is meditative and reflective.

Everyone is dressed in their prettiest kebaya and sarong, all ready to wash away the negative energy from the past year and welcome the New Year. As we join in the procession, locals are smiling at us and giving us gentle nods as signs of approval. I can’t help feeling extremely privileged to be here, right at this spot, for the special occasion.

The procession takes us through the main street of Penestanan, across the Campuhan bridge, and right down to the Pura Gunung Lebah, a beautiful temple in Ubud perched on a ravine with long lalang trees dangling over it and a river flowing beneath. Everyone including the barong enters the temple and the procession ends right as the last ebb of the sun fades away into the distance 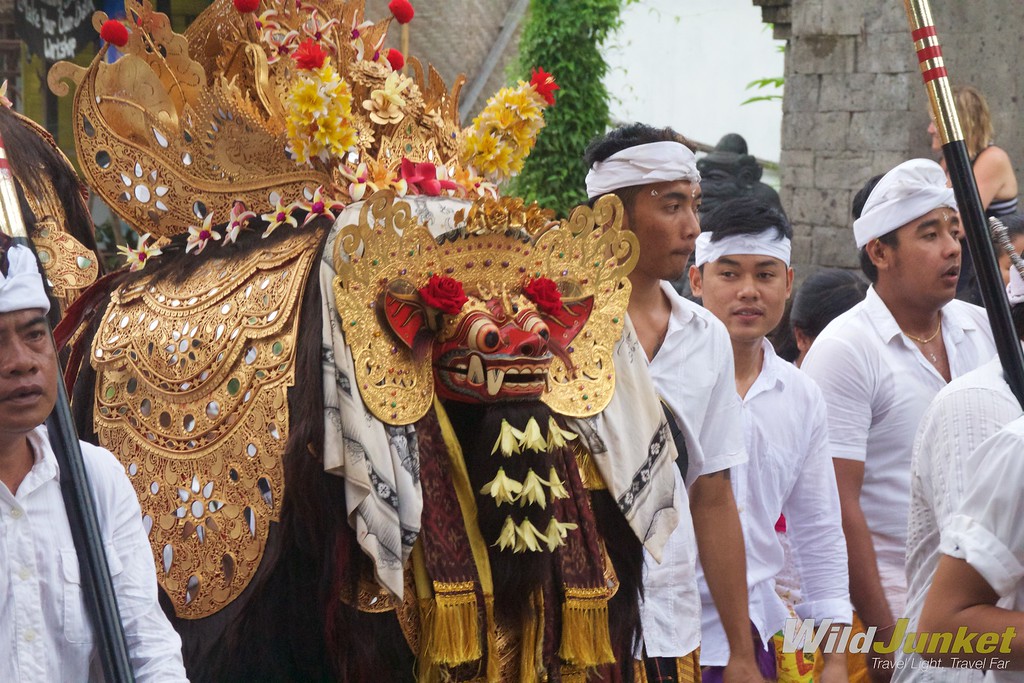 A Parade of Demons on Nyepi Eve

The next day, I put on my very own kebaya and sarong (the national costume of Indonesia) to join in the celebrations along with my husband and daughter, as well as friends who have come to visit. The Ngrupuk parade, which takes place on Nyepi eve, is said to be the biggest parade of the year.

In Ubud, the Ngrupuk parade takes place along Jalan Monkey Forest, where one Ogoh-ogoh after another is carried out by convoys. Ogoh-ogoh statues are giant demon figures that are paraded around villages and then burned to ashes, in order to vanquish the negative elements and create a balance with God, mankind and nature. 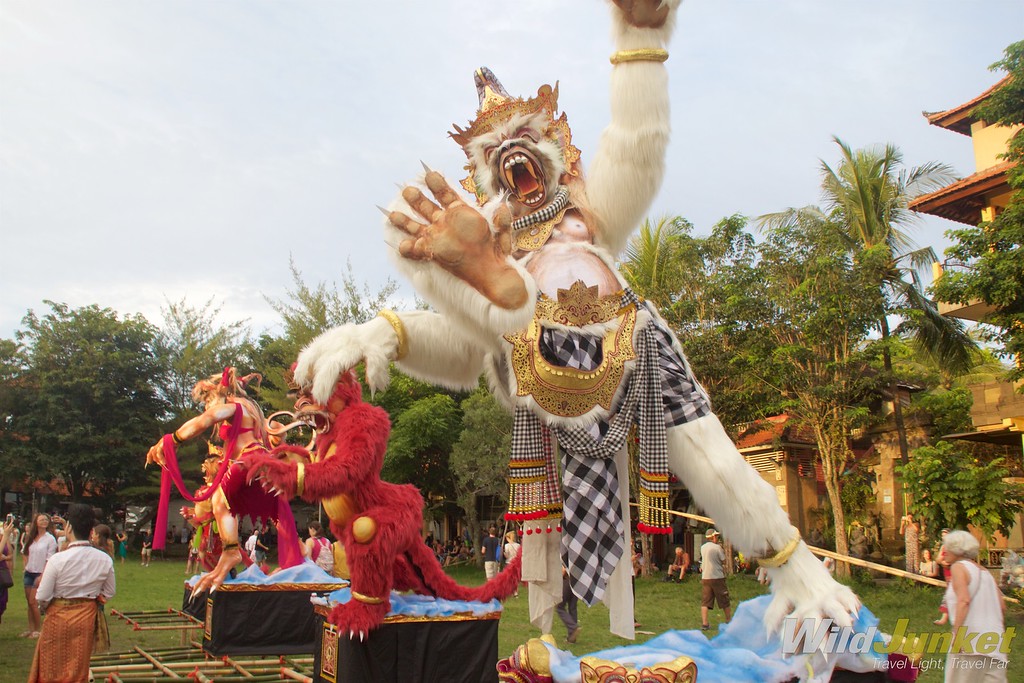 Ogoh-ogoh: The Symbol of Nyepi

They normally take the form of mythological beings, and tend to look very dramatic and scary with big bulging eyes, sharp teeth and exaggerated expressions. They may be made of bamboo and styrofoam, but they are created with so much artistic skills and technique that they look very realistic and visually stunning. Kaleya, my two-year-old daughter, is so drawn to the Ogoh-ogoh that she just can’t get enough of them.

Read here for more tips on traveling Bali with kids. 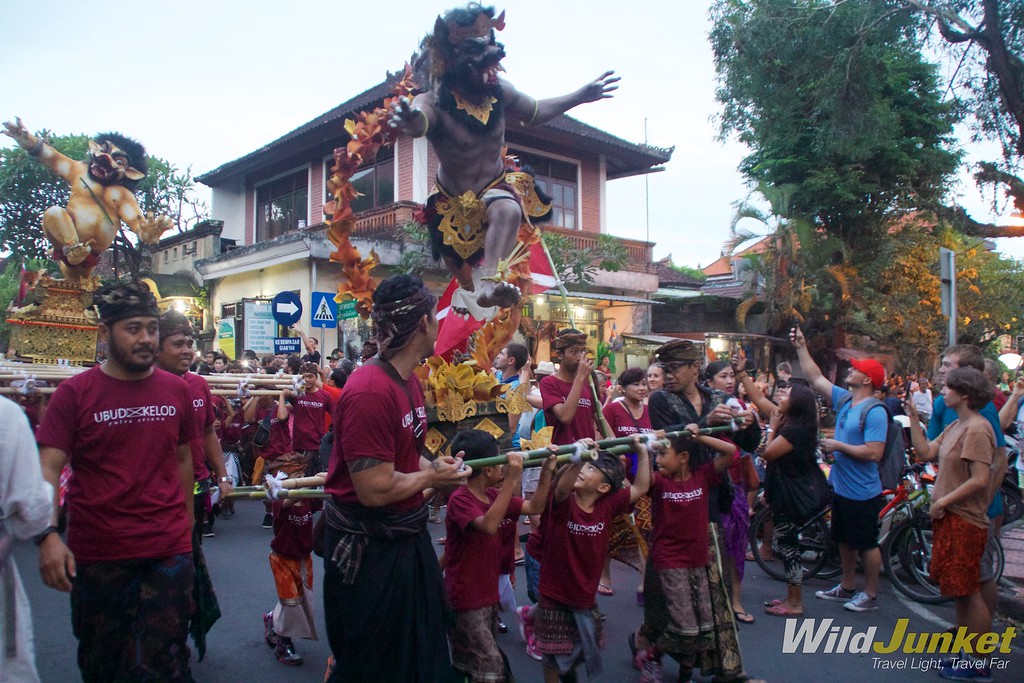 The Origins of the Ogoh-ogoh

The interesting thing is, the Ogoh-ogoh is in fact a very recent addition to the Nyepi ceremonies, first appearing in Denpasar in the early 1980s. These days, almost every village makes its own Ogoh-ogoh, and it is mainly the responsibility of the village’s Seka Truna Truni (Baliness village’s youth organization). In the weeks leading up to Nyepi, we saw countless villages working hard to produce the biggest and most impressive Ogoh-ogoh figure in the region.

We watch as convoys of men carry the Ogoh-ogoh statues on timber and bamboo pads, into the big football field on Monkey Forest Road. At the cross-section, each Ogoh-ogoh is rotated counter-clockwise three times, to bewilder the evil spirits so that they go away and cease harming human beings. The parade is also accompanied by music and loud noises, and even flares, intended to scare the evil spirits away.

Now looking back, it’s a stark contrast to the Day of Silence that follows afterwards. 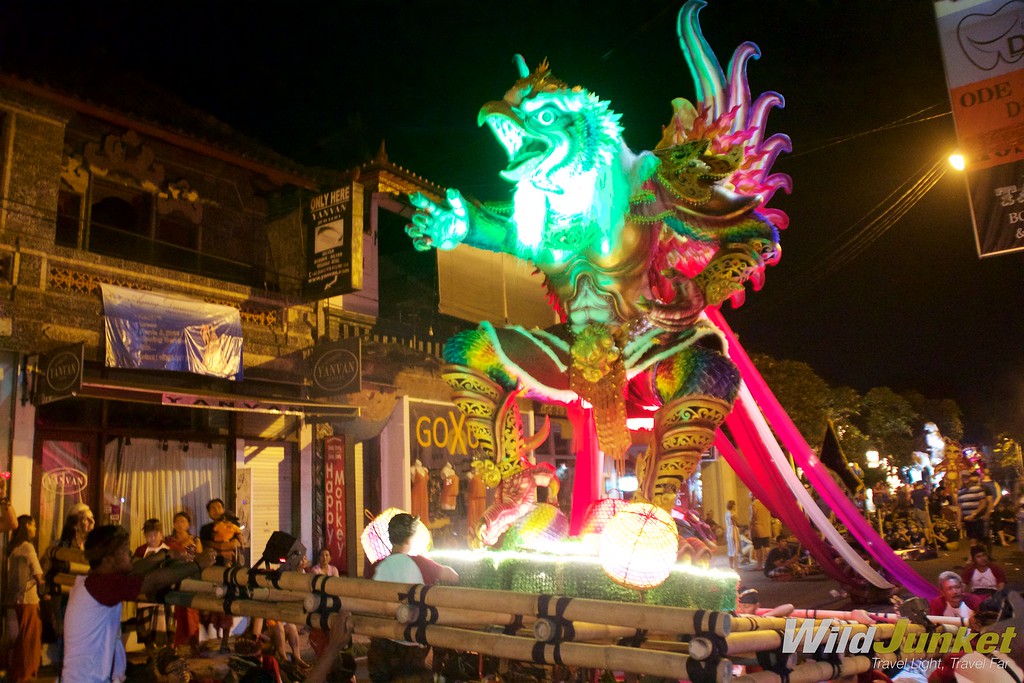 The mayhem continues all the way until 6am, when Nyepi officially begins and the entire island shuts down. The day is strictly reserved for self-reflection, and as such, anything that might interfere with that purpose is restricted.

The main restrictions are no fire or light; no electricity; no working; no entertainment or pleasure; no traveling; and, for some, no talking or eating at all. Revelry is prohibited and even tourists are not allowed to go out of their hotels. The only people to be seen outdoors are the Pecalang, traditional security men who patrol the streets to ensure the prohibitions are being followed. 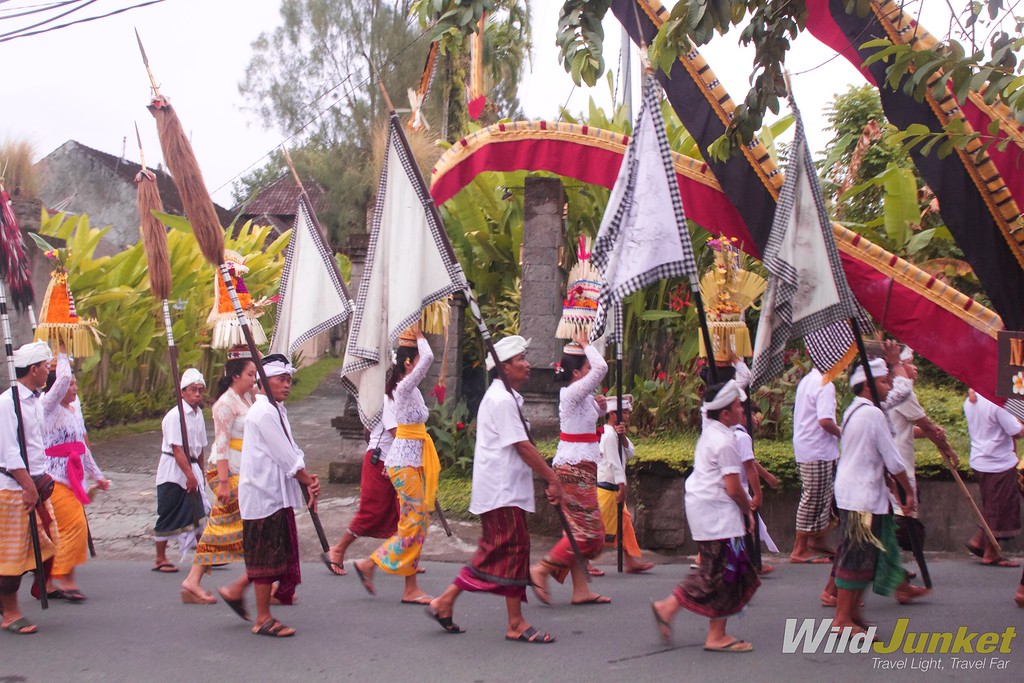 The effect of these prohibitions is that Bali’s usually bustling streets and roads are empty, there is little or no noise from TVs and radios, and few signs of activity are seen even inside homes. The island is rid of all sorts of traffic and pollution on Nyepi day including the airport and aerial space of Bali. Every year over 1 million litre of fuel is saved on this day.

We spend the day in our hotel grounds, happy to enjoy some downtime, for some reflection of our own. Many travelers whine about being ‘confined’ to their hotel but I’d say, embrace it instead of fighting it. Enjoy the opportunity to spend a day with minimal distractions and take the time to relax and reflect.

READ NOW
15 Fun Things to Do in Sri Lanka (Plus A Complete Travel Guide!) 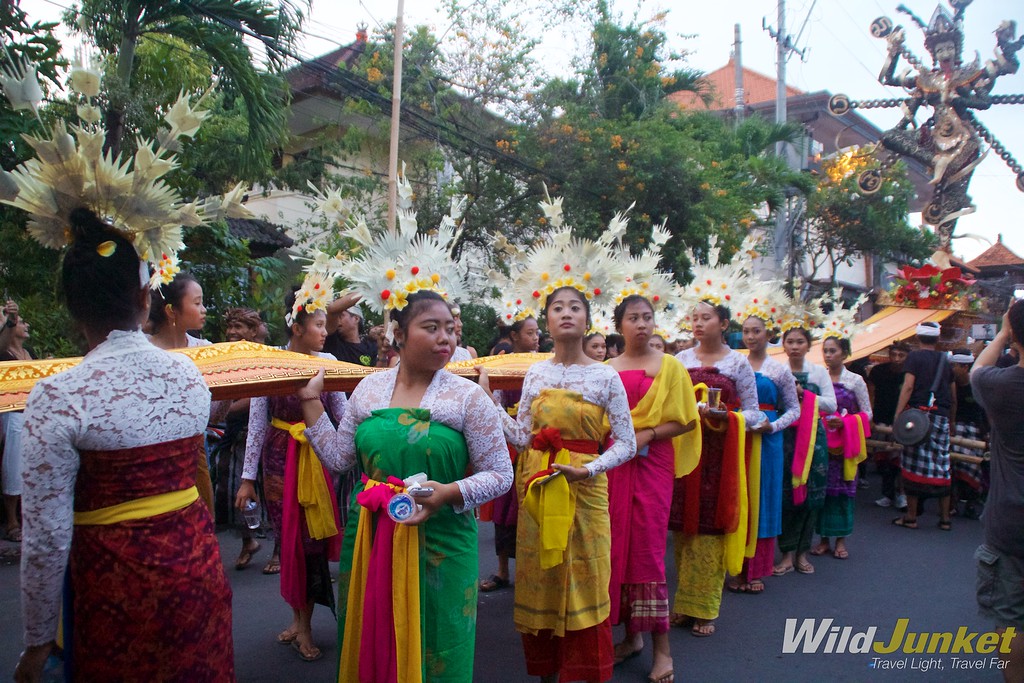 The End of Nyepi

On the day after Nyepi, known as Ngembak Geni, social activity picks up again quickly, as families and friends gather to ask forgiveness from one another, and to perform certain religious rituals together. We see the gates of people’s home covered with lavish decorations, welcoming family members into their home. The traffic is back and Bali is buzzing with life once again.

This isn’t my first trip to Bali — but it’s definitely the first time I’ve truly immersed in the Balinese culture. Celebrating Nyepi in Bali has not only given me a better understanding of their culture, but it’s also helped me gain new perspectives on self-reflection, something that’s vital to all of us. I’ve learned just how important it is to pause, take a breather and press the reset button. Perhaps if everyone were to practise a day of self-reflection, the world would be a better place. 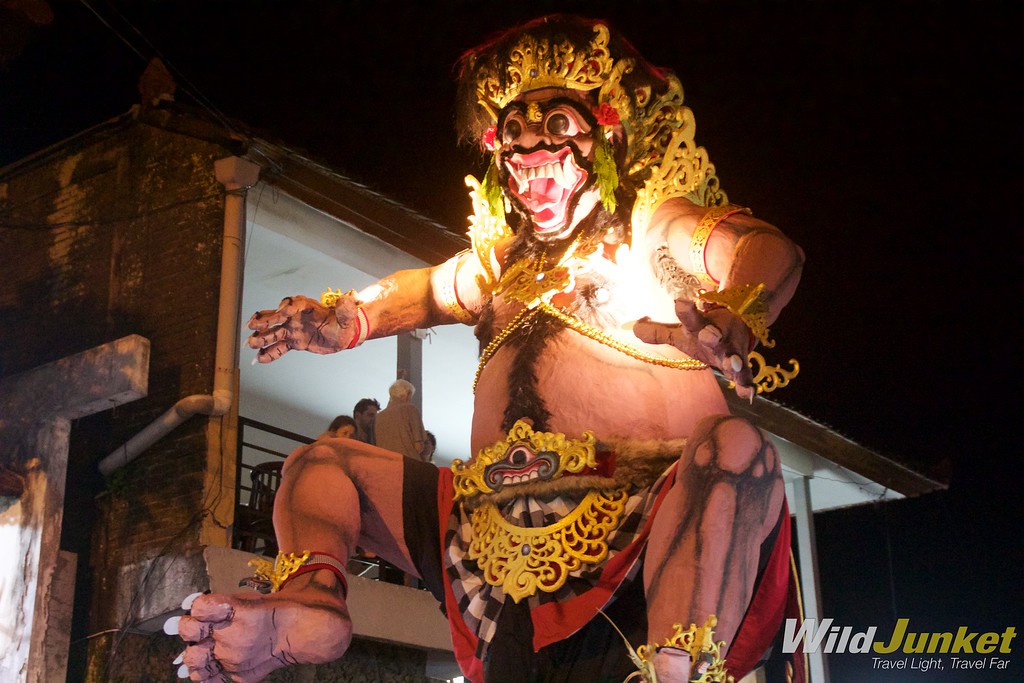 Nyepi usually falls in March and celebrations always start three to four days before the day of the festival itself. Hotel prices actually drop during this period as it’s considered low season for tourism (since many travelers avoid it) so make the most of the low prices!

If you are planning to go to Ubud for Nyepi, I would recommend staying in Ubud city centre, preferably next to Ubud Palace, to be close to the Ogoh-ogoh parade and other processions. We stayed at Champlung Sari Hotel, a budget hotel right near the Sacred Monkey Forest, and that was within walking distance from the football field where many Ogoh-ogohs gathered.

It’s wise to choose a bigger hotel with facilities as you’ll be spending the whole of Nyepi day in the hotel itself. Make sure the hotel has a swimming pool and a restaurant. Other areas that have big Nyepi celebrations on the island are Denpasar and Kuta.

Tips for Celebrating Nyepi in Bali

For those planning to be in Ubud for Nyepi, make sure to arrive in the city before 2pm on Nyepi’s eve as roads usually close around that time. Most shops and restaurants will also close by that time; only restaurants near the football field and along the main road will stay open. The Ogoh-ogoh parade starts around 5pm in the city centre and goes on till late into the night.

I recommend getting a kebaya and sarong (especially for the ladies) to blend in to the crowd. This isn’t so much for the Ogoh-ogoh parade but for the local processions that take place before Nyepi eve. Everyone in the procession will be wearing the traditional Indonesian costume and if you want to join in or enter the temple at the end of the procession, it’ll be wise to dress as the locals do. 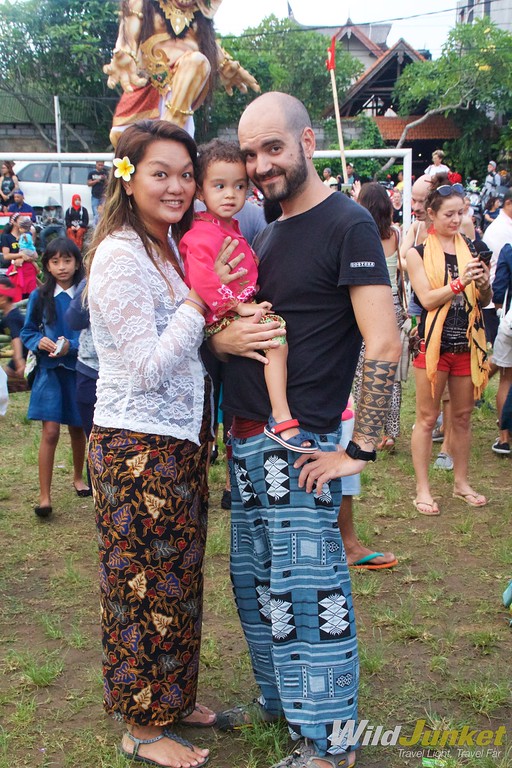 How to Get to Ubud

Ubud is about an hour to 1.5 hour from Denpasar Airport by car. A taxi will usually costs around 250,000 Rupiah each way. You can’t usually get an Uber from the airport and most drivers won’t bring you to Uber anyway.

>> Check for flights to Bali

READ MORE: Where to Stay in Bali