On our Florida road trip, we made a day trip to Dry Tortugas and had an amazing time discovering Florida’s best kept secret.

The pearly white beach is empty, except for our footprints in the sand. A regal 19th-century fortress stands behind us, but apart from that, we are completely surrounded by sparkling, spearmint blue water. Alberto and I hold hands and smile at each other. It’s almost as if we’re on a private island, in the middle of the ocean.

In some ways, we are.

We’re 70 miles (113 km) away from the mainland here at Fort Jefferson on Garden Key, in the Gulf of Mexico. Along with six other islets, Garden Key is part of the Dry Tortugas National Park, a highly-protected marine conservation area. The mainland I’m referring to is the American continent, and we are at its southernmost tip, closer to Cuba than most of North America. Accessible only by boat or seaplane, the island is easy to get to, but surprisingly remote and unknown. Yet, it’s a part of Florida that few get to see: indigo blue water clearer than glass, pristine beaches empty of sun-decks and loud holidaymakers, and marine life more colorful and impressive than those in the aquarium.

And of course there’s an intriguing historical element here as well. Fort Jefferson was built to protect the nation’s gateway in the 1800s, due to the large number of vessels that plowed its waters. Though it was never completed, it remains as the largest all-masonry fort in the United States.

Thankfully the vessels that plowed its waters are long gone. In their place are speckles of curious, responsible travelers, who have come a long way to keep this place a secret. It’s definitely the best place we visited on our Florida road trip and we consider it one of the best national parks in USA. We want to share this little secret with you, but shhh… remember to keep it to yourself!

Dry Tortugas National Park is a remote island about 70-miles (113 km) west of Key West, Florida. This 100-square mile park is mostly open water with seven small islands. The seven tiny islands of Dry Tortugas are a vital layover for migrating birds traveling between South America and the United States making a staple in the Great Florida Birding Trail. Here we saw a ruby–throated hummingbird, peregrine falcon, yellow billed cuckoo and white-eyed vireo all in one day!

Dry Tortugas National Park also offers some of the best snorkeling and skin diving in North America. The area is known for its treacherous reefs. Despite having a lighthouse, many ships have sunk here — creating some of the richest concentrations of shipwrecks in North America. We snorkeled right off Fort Jefferson and saw a multitude of colorful marine life and a small shipwreck. What’s in the Name “Dry Tortugas’?

When Spanish explorer Ponce de Leon discovered the Dry Tortugas island in 1513, he was amazed by the amount of sea turtles he saw; they were everywhere! He decided to name the island after the magnificent animals and gave the island the name “Las Tortugas” which is Spanish for “the turtles.”

Despite its beauty and abundance of nature, fresh water was scarce on the island, and the word “dry” was added to the name to warn sailors and visitors that they needed to bring their own fresh water to drink.

After the War of 1812, Fort Jefferson was built to protect the southern coastline of the United States. The fort was planned to be the greatest of all the forts.

Fort Jefferson itself is a six-sided building constructed of 16 million handmade red bricks. The heavy guns were mounted inside the walls in a string of open casemates, or gunrooms, facing outward toward the sea through large openings. Living quarters for soldiers and officers, gunpowder magazines, and storehouses were located on the parade ground inside the fort’s massive brick walls.

Fort Jefferson was also used as a prison for criminals and deserters during and after the Civil War. During its time, Fort Jefferson held over 2,500 prisoners. With its rich historical background, Fort Jefferson finally received its designation as a National Monument in 1935. 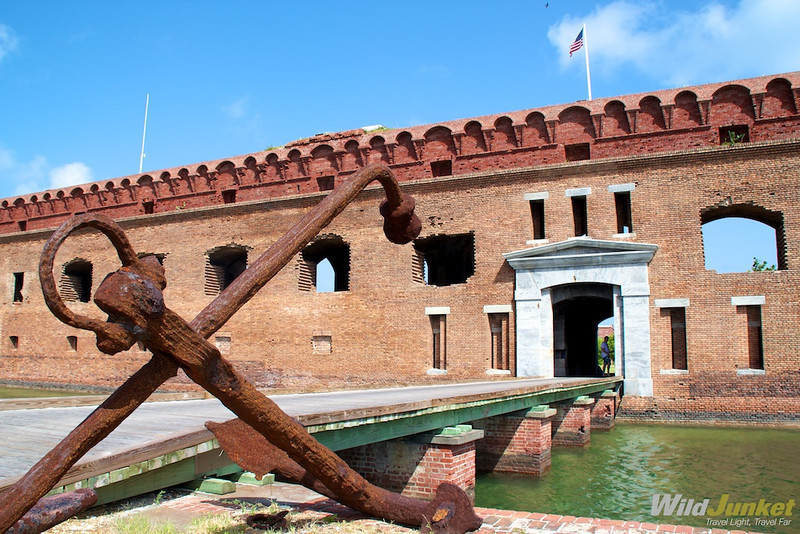 How to Get to Dry Tortugas

Cars are not able to access the island. The only methods of transportation are by boat or seaplane. Both methods allow for easy day trips to Dry Tortugas. I’ll explain in details how you can get to Dry Tortugas via each method:

We took the Yankee Freedom ferry from Key West for our day trip to Dry Tortugas. It’s the only boat that goes to Dry Tortugas. A return boat trip on Yankee Freedom costs $190 per adult (includes entrance tickets to the national park). There is a $10 discount for active duty members of the military, seniors ages 62 or higher, and full-time students (age 17+). Children ages 4 to 16 are $135 each.

Upon boarding at 7:30 am from Key West, you will get breakfast on the boat. En route to Dry Tortugas National Park the onboard guide will give you an orientation about the area and the national park’s surroundings. You will reach the National Park boundaries within 2 hours 10 minutes after leaving Key West harbor.

Once at Dry Tortugas National Park, you will disembark at Fort Jefferson and have the option of joining a 45-minute guided tour. Yankee Freedom includes a complimentary box lunch.

Then you’ll have the day free to go swimming, snorkeling or birding. The boat will leave in mid-afternoon and arrive back in Key West at approximately 5:15 p.m.

INCLUDED WITH THE DAY TRIP 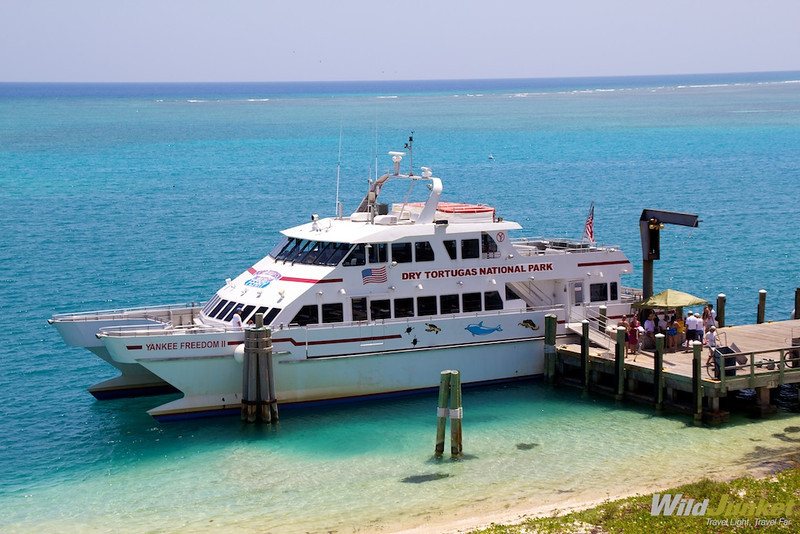 Key West Seaplane Charters are the only Seaplane Service permitted in Dry Tortugas National Park. I personally think they’re way too expensive. But if you’re ready to splurge, the flight time is only 40 minutes and views from the plane are phenomenal.

There are no hotels or guesthouses on the islands, but camping is allowed. However, due to the remote location there are a number of guidelines and restrictions that you must follow in to go camping on Dry Tortugas.

Be aware that you will be wild camping at Fort Jefferson! There are no facilities -no fresh water or toilets – other than a small gift shop in the fort. In other words, you must bring everything (water included) with you.

If you would like to camp on Dry Tortugas, you must be at the Yankee Freedom no later than 6:00am the morning of your trip with all of your gear and provisions.

Before you make a camping reservation, please read about our Dry Tortugas Camping Information.  Reservations on the ferry are limited and sell out 9-12 months in advance so please plan ahead!

Camping fees are collected through a self-service fee area that is located in the campground. Is a Dry Tortugas Day Trip Worth the Money?

As you can see, a Dry Tortugas day trip isn’t cheap. You’ll be spending at least $195 for just one day on the island.

For me, it was definitely worth the while. Dry Tortugas is unlike anywhere I’ve been in the US. It’s absolutely remote, pristine and uncommercialised. The national park is kept in pristine condition, with no massive cruises or large-scale hotels/shops to destroy the natural environment. I would 100% recommend a visit to Dry Tortugas, especially if you’re someone who loves the underwater world.

That said, to make the trip worthwhile, I would suggest camping on Dry Tortugas. You do need to reserve months in advance, but it will make the $195 you’re spending on the ferry tickets much more worthwhile. We definitely regretted not camping and spending more time to explore the island.

Where to Go Snorkeling on Dry Tortugas

Dry Tortugas National Park is situated at the southwest corner of the Florida Keys reef system, the third largest in the world. Due to the remote location, and easterly flowing gulf current just south of the park, you are sure to discover a much greater abundance of marine life and often much larger versions than anywhere else in the Florida Keys.

Here are some of the best spots to go snorkeling in Dry Tortugas:

Download a map of the snorkeling sites in Dry Tortugas. Tips on Snorkeling in Dry Tortugas

All coral, reef fish, and cultural artifacts are protected. Do NOT touch any coral and marine animals, and make sure you don’t bump into them. Not only will an accidental brush up against the coral probably kill it, you may be bumping into potentially dangerous animals, including fire coral, jellyfish, sea urchins, or the exotic venomous lionfish.

Are you planning a day trip to Dry Tortugas? I hope this article has been helpful. Let me know if you have any questions below.

Disclaimer: This trip was made possible by Visit Florida and The Florida Keys and Key West, but all opinions expressed above are our own.