10 Things You Should Know Before Your Trip to Tibet

Heading to Tibet soon? Here are some things you should know before your trip to Tibet.

Monks, monasteries and mountains — Tibet is a spiritual place that has the power to move even the most hardened traveler. This remote, far-flung region is seemingly in a world of its own, with fabled villages tucked between some of the highest mountains in the world, and devout pilgrims prostrating around impressive temples.

50 years of political indoctrination and religious control have failed to dull the Tibetans’ devotion to their faith. The Tibetans are always ready with a smile and an opened heart, and an admirable tolerance for hardship and oppression.

A trip to Tibet can be rewarding and adventurous, and it gives you a peek into one of the most oppressed nations in the world. But traveling to Tibet isn’t easy with the strict travel restrictions and visa rules. To prepare properly for this trip of a lifetime, here are some things you need to know about travel to Tibet.

READ NOW
How to Travel Tibet — A Complete Guide 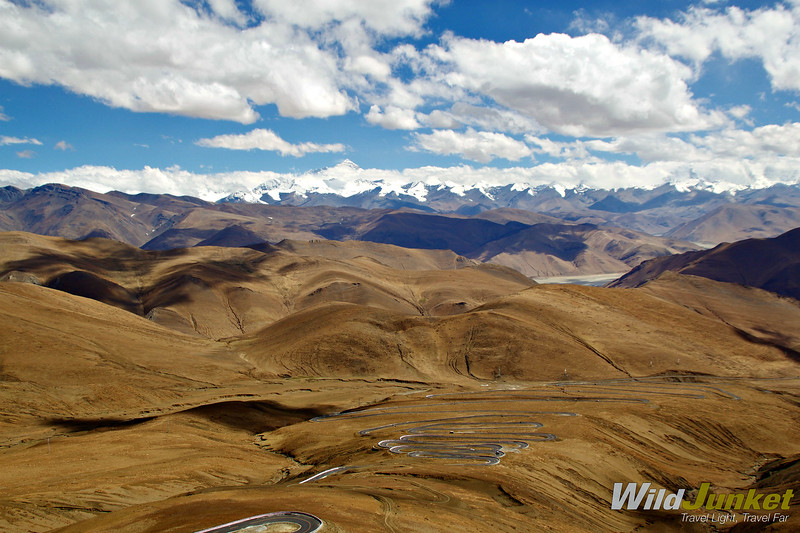 Things to Know Before Your Trip to Tibet

Tibet is officially a part of China even though some Tibetans may not agree with that.

In 1950, the newly established Communist regime in China invaded Tibet, which was rich in natural resources and had a strategically important border with India. Even until today, the People’s Republic of China (PRC) claims that Tibet is an integral part of China, but the Tibetan government-in-exile (set up by the 14th Dalai Lama after he fled to India) maintains that Tibet is an independent state under unlawful occupation.

What is recognised now as the Tibet Autonomous Region (TAR) is in fact a fraction of Tibet’s historical territory. The Chinese divided up Tibet, renamed and incorporated Amdo and parts of Kham into Chinese provinces. The people in these regions all consider themselves Tibetan, although each has a strong identity and uses different dialects of Tibetan. 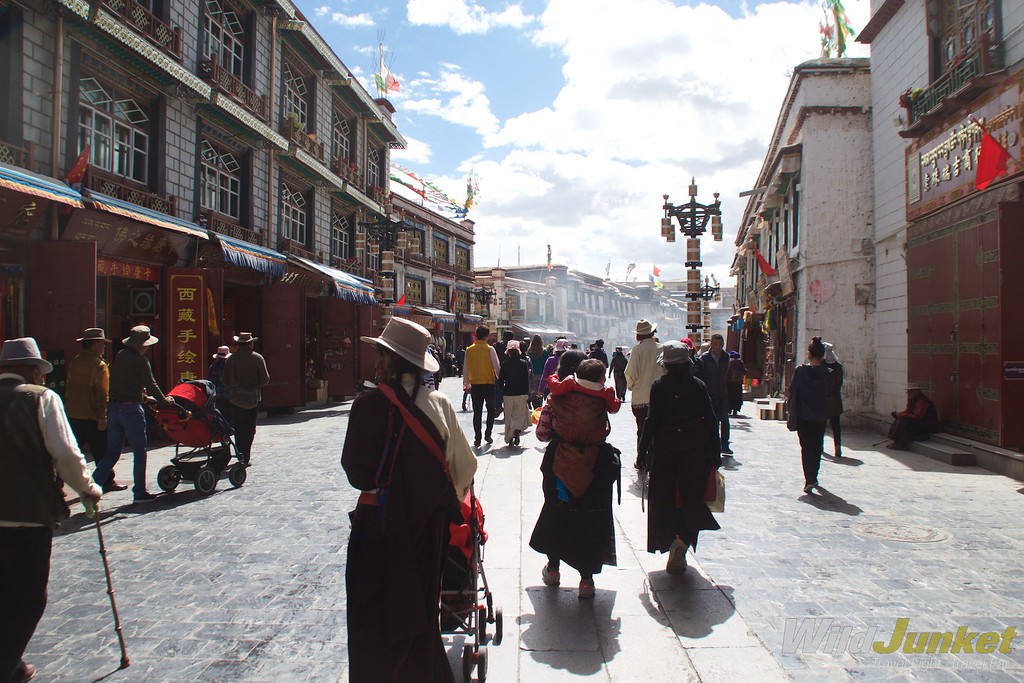 After 50 years of ruling by China, Tibet is still an oppressed nation that enjoys very little freedom of speech and religion.

Since taking control of Tibet, the Chinese government not only abolished the Tibetan government but also started wholesale destruction of Tibetan monastic heritage and dilution of the Tibetan culture through education and policies. Over the years, the government’s line on Tibet has softened and there has been a call for the revival of Tibetan culture; but to this day, there is still a serious lack of basic human rights and democratic freedom in Tibet.

If you have any pro-Tibetan sympathies, be careful with whom you discuss them. Discussing political issues with your guide might get him into a potentially dangerous situation. Don’t hand out politically sensitive materials and photos of his Holiness Dalai Lama (which are illegal in Tibet). You’ll also find many police stations and army posts all over Tibet, keeping an eye for the first sign of dissent. 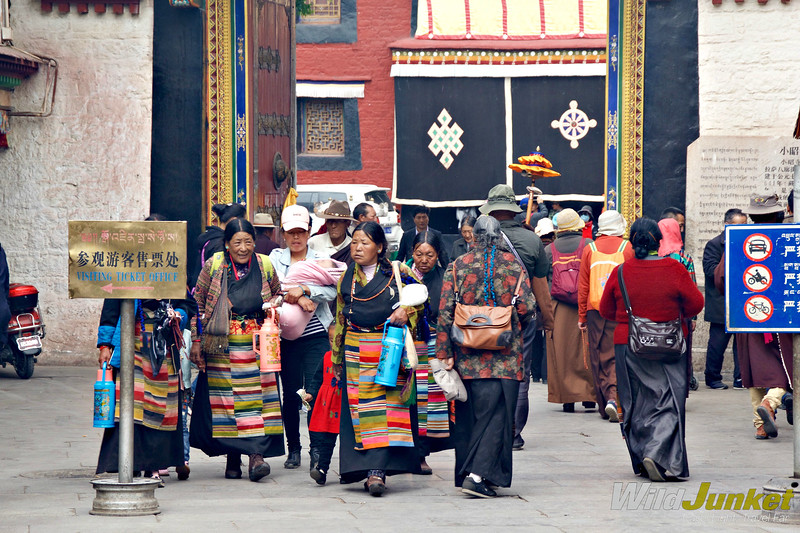 There are lots of travel restrictions to Tibet, and it’s NOT easy to enter the region.

Tibet has been ruled under the watchful eye of China since their invasion in the 1950s. The grip tightened after major riots and protests that happened in Tibet in 2008, after which China officially closed Tibet’s doors to foreign visitors. It reopened in 2009 and these days it continues to welcome travelers these days, with much more relaxed entry rules than before.

That said, dealing with all the paper work that’s involved with travel to Tibet can still be overwhelming. Independent travel in Tibet is not allowed and foreign travelers need to prearrange a tour in order to obtain a Tibet Tourism Bureau (TTB) permit. Without a TTB permit, you won’t be able to board a flight or train to Tibet.

Besides citizens of Singapore, Brunei and Japan, all visitors require a valid Chinese visa in order to apply for a Tibet permit. Don’t mention Tibet and don’t list your occupation as ‘journalist’. You will have to decide on your Tibet itinerary when booking the trip. Also it is not allowed to bring any foreign travel books about Tibet into the country, so make sure you keep that in mind when packing. 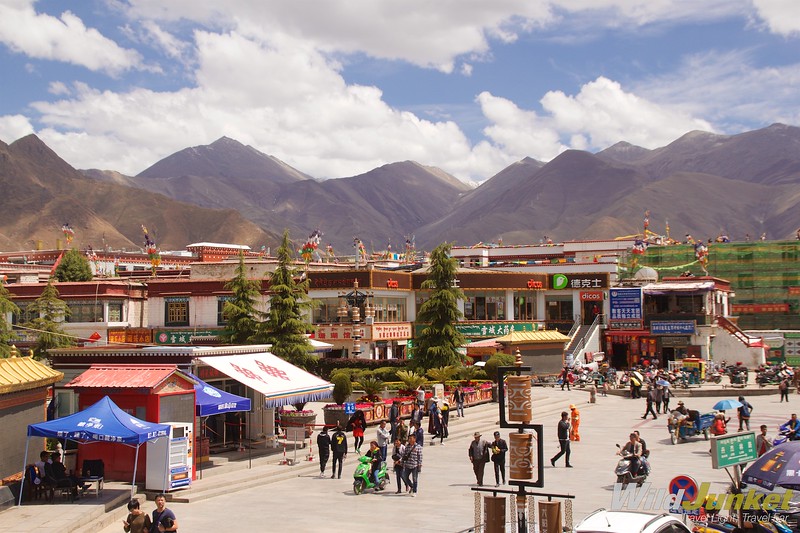 Visiting Tibet can be an ethical issue for some.

Before my recent trip to Tibet, I received quite a few negative remarks from friends who are opposed to the idea of visiting the region. Many people, especially in the Western world, strongly disagree with the Chinese’ political indoctrination of the oppressed nation and would never visit Tibet until it is fully liberalised from the clutches from China. I absolutely oppose to China’s hard-headed tactics and Marxist principles, but visiting Tibet does not mean I’m supporting the regime.

In fact, I think more people should visit it so Tibet gets the attention and support from the outside world it deserves. I see travel as the best form of education — only by going there, talking to locals and seeing things from ground level do you truly learn about what’s going on, and can therefore inform others about the state that Tibet is in. 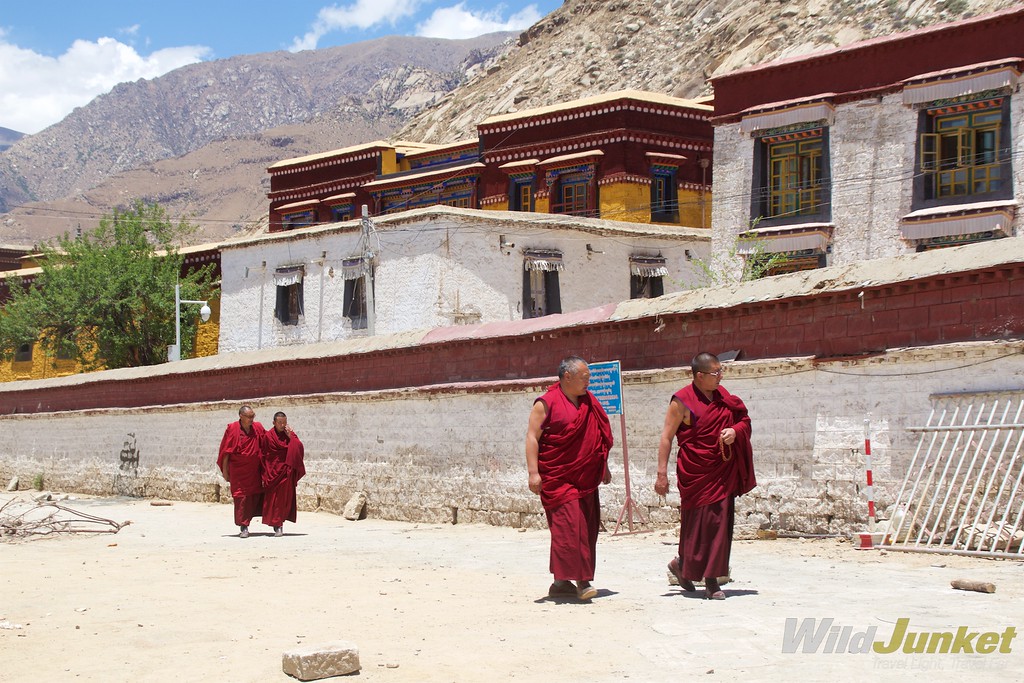 Lhasa and most parts of Tibet have been largely sinicized after more than 50 years of occupation by China.

Since taking over Tibet in the 1960s, the Chinese government has gone on a nation-wide campaign to integrate Tibet with China. In a bid to ‘modernize’ the backward province of Tibet, the Chinese government encouraged Han immigration to Tibet with attractive salaries, a policy that has been successfully carried out in Qinghai and Xinjiang. They also built plenty of Chinese-style apartments and replaced old Tibetan buildings with new ugly concrete blocs. Don’t be surprised to see malls and skyscrapers in Lhasa, standing right next to old monasteries and palaces.

Another proof of sinicizing Tibet can be seen in the education system. Students are taught Mandarin as the first language in schools, and little importance is placed on the Tibetan language. Chinese influence is also evident from the food you’ll find in Tibet. Besides Tibetan staples like tsampa (barley flour), you’ll usually find lots of Chinese dishes served in most restaurants and teahouses.

READ NOW
Pictures of Tibet: the Roof of the World 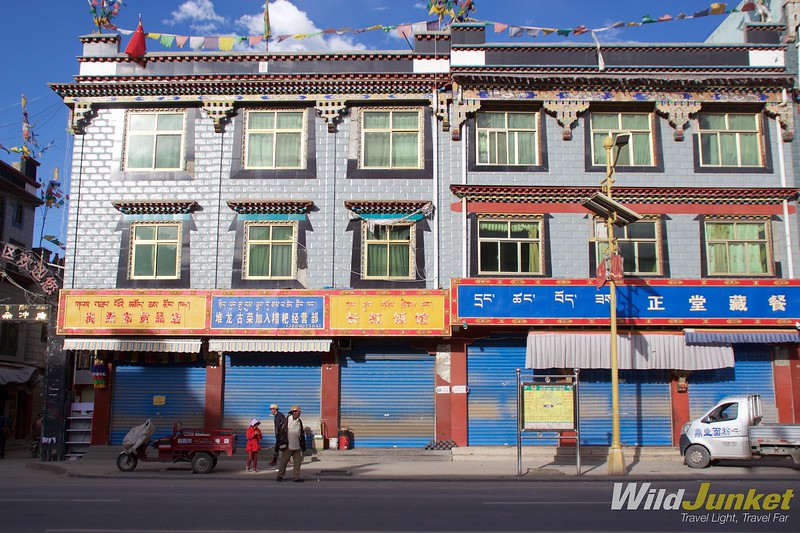 Tibetans are deeply devoted to their faith and it can be extremely moving to experience their dedication.

Despite mass modernisation and dilution of their culture under China’s iron fist, Tibet remains a resilient land underpinned by a rich culture and deep faith. 50 years of oppression and religious control have failed to dull the Tibetans’ devotion to their faith.

Today, amidst the kitsch neon signs, Chinese supermarkets and fast food chains, it’s still common to see hardcore pilgrims prostrating themselves in koras circumambulating sacred spots around the country. Some travel hundreds of miles by foot for the pilgrimage, while others prostrate as part of their daily ritual. The Chinese may have taken away a lot of things from Tibet, but they’ll never take away their identity and faith. 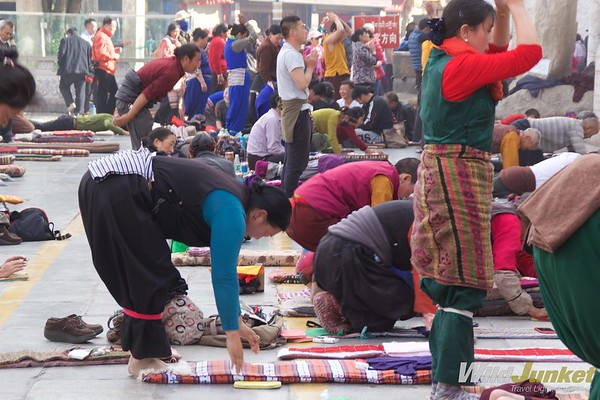 Tibet is called the ‘Roof of the World’ for good reasons — prepare yourself for altitude sickness.

Located on the highest plateau in the world, the region has an average elevation exceeding 4,500 metres (14,800 ft). The capital city Lhasa itself stands at 3,656m (11,990 ft) above sea level, and Everest Base Camp looms at 5,200m (17,056 ft). At such dizzying heights, it can be easy to suffer from AMS (Acute Mountain Sickness) if you don’t take the time to acclimatise to the conditions.

Tibetan people on the other hand are genetically adapted to living at higher altitudes. They have more red blood cells than most of us and that helps them to live with the limited oxygen at high altitudes. Most people flying into Lhasa suffer from AMS; symptoms include light-headedness, nausea, short of breathe and headaches. Just make sure to get some Diamox (Acetazolamide) before your trip and start the medication at least one day before landing in Lhasa. 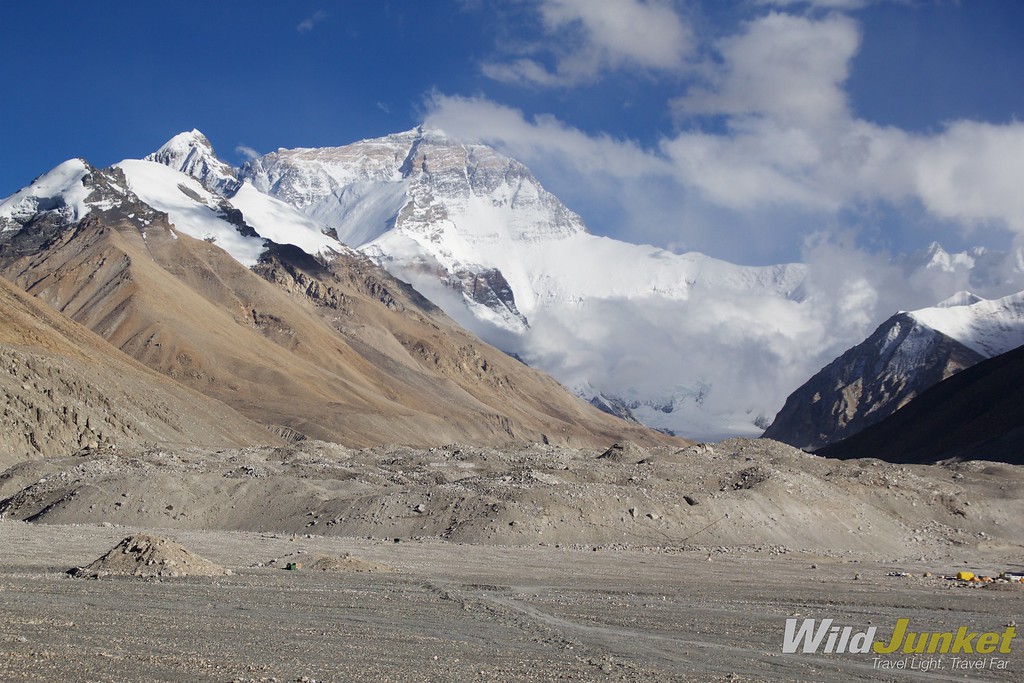 The toilets in Tibet are some of the worst you might encounter in the world!

If you’ve ever been to China, you’d know how gruesome their squat toilets can be. But in Tibet, their toilets are about a hundred times worse. In fact, they probably have the worst toilets I’ve ever seen in my travels (to 116 countries on 7 continents). Think wet squatty potties, poop splashed on the walls, toilets with no doors, and human waste flowing in the trough between your feet.  There’s no escaping horrible toilets in Tibet, but hey, you gotta do what you gotta do. 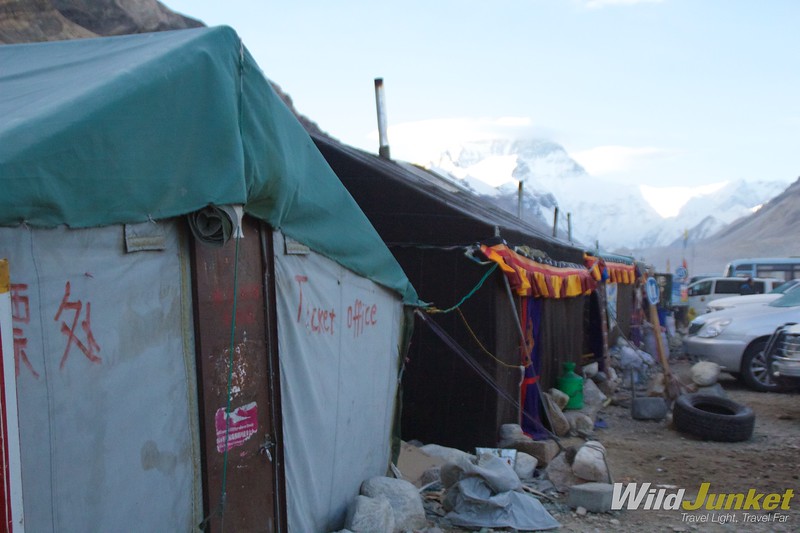 But the pristine beauty of the natural landscapes make it worth your while.

Geography in Tibet is on a humbling scale —dramatic snow-peaked mountains loom over vast plains, zigzagging highways weave their way through high passes draped with colourful prayer flags, while glittering turquoise lakes stand in the shadow of centuries-old glaciers. Home to several of the world’s highest peaks, Tibet is an extremely mountainous region packed to the brim with natural sights that are impressive in terms of magnitude.

While Tibet is hard to get in and even harder to get around (on a tour only!), the natural beauty of the country and the spiritual atmosphere in the magic nation make it all worth it. Tibet is one of the most beautiful places I’ve been in the world and that says quite a lot. 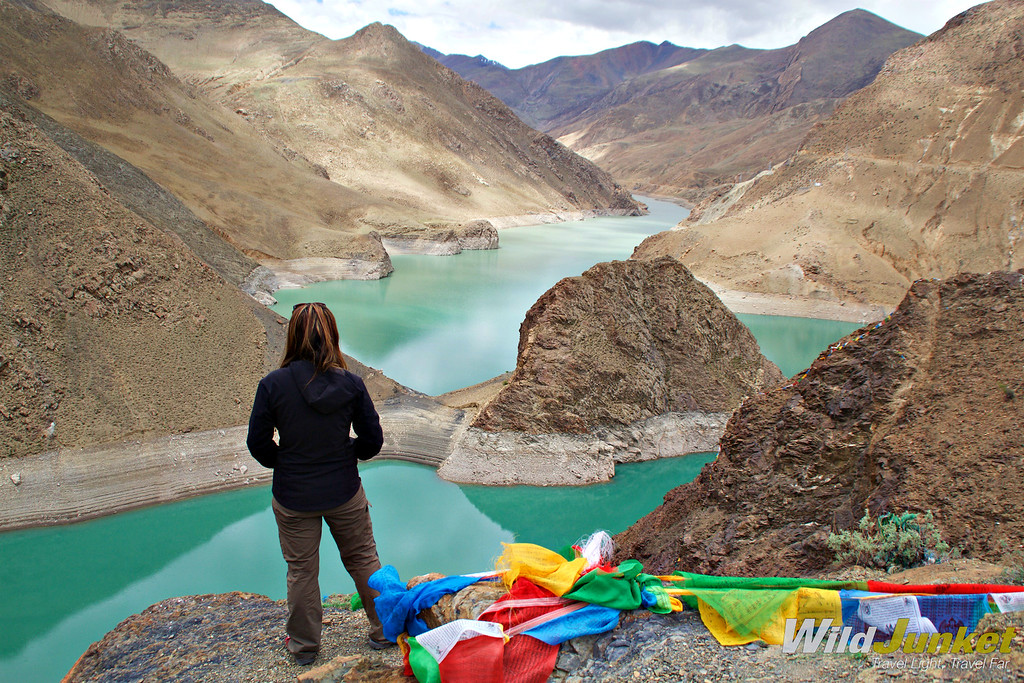 For those who are planning to travel Tibet, I hope this list has prepared you for your trip to the Third Pole. Regardless, expect to be surprised, because nothing will really prepare you for the magic of Tibet.

Interested in traveling to Tibet? I’ll be running more tours to Tibet in future! Join my mailing list to be the first to learn about my new tours.