On our recent trip to South Africa, we had the privilege to stay at the famous Oyster Box Hotel Durban. Here’s our detailed review!

If you think South Africa is all about wildlife safari and bushwalking, think again.

The country is one of the most diverse I’ve been, with cosmopolitan cities along dramatic coastlines that fringe wild savannahs and rugged mountain range. You can easily go from game-driving in the wilderness to surfing on the beach or wine-tasting at sophisticated vineyards in a matter of hours.

On our recent Southern Africa trip, we wanted a good mix of safari, mountain and beach time. While we love our adventure, traveling with our kid means we need to slow down and inject some chillin’ time to the itinerary. A look at the map and I knew Durban would be the perfect place to unwind in between our jaunts to Swaziland and Lesotho.

Durban is a funky and hip coastal city with the energy and character of an African city intertwined with British heritage and Asian influence. We sadly didn’t get to see much of it, since we ended spending most of our time at The Oyster Box Hotel. A classic landmark of Durban since 1947, The Oyster Box is easily the best hotel in Durban. It was the perfect fit for our family and we all fell in love with the hotel. 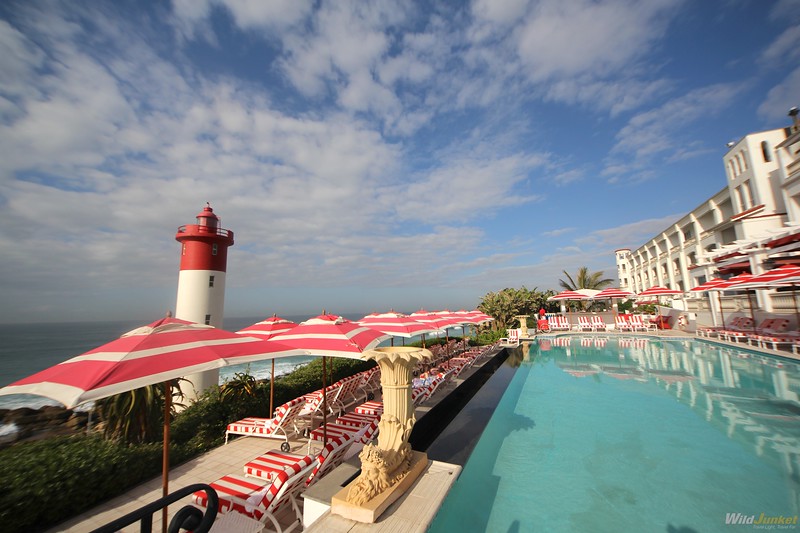 The Oyster Box is one of the best-loved luxury hotels in South Africa, having gained a loyal following since opening its doors in 1947. It has won the hearts of many with the thoughtful details, outstanding cuisine and the latest amenities and facilities.

It’s the accommodation of choice for many royalties and celebrities, including Princes’ Harry and William, King Goodwill Zwelithini, King of the Zulus and more recently, Prince Albert and Princess Charlene of Monaco.

It’s no wonder the hotel was once again voted number 1 in the Top 25 Hotels in South Africa, TripAdvisor Travellers’ Choice Awards 2018. The Oyster Box has also won many other awards including the Condé Nast Traveler Readers’ Choice Awards, Lilizela Awards and World Luxury Spa Awards. 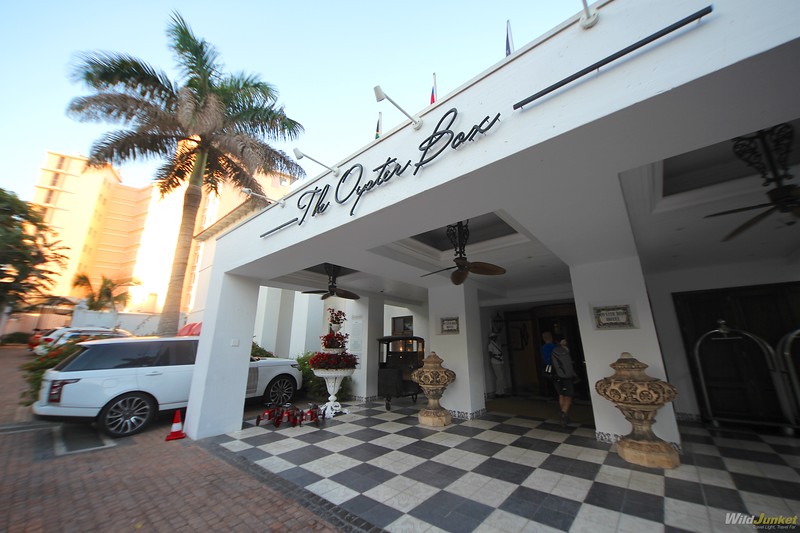 Location of The Oyster Box

What I love most about The Oyster Box is definitely its outstanding location, perched on the dramatic beach of Umhlanga Rocks, overlooking the iconic Umhlanga Lighthouse. There are staggering views of the Indian Ocean wherever you go, and you can hear the sound of the crashing waves from the comfort of your suite.

As the official warden of the Umhlanga Lighthouse, The Oyster Box is closely connected with this much-loved landmark. The historic monument has plenty of stories to tell. It was actually built AFTER the hotel was already there, in November 1954. These days, the hotel’s  red-and-white deck chairs and outdoor furnishing blends perfectly with the colors of the lighthouse, as they were meant to be. 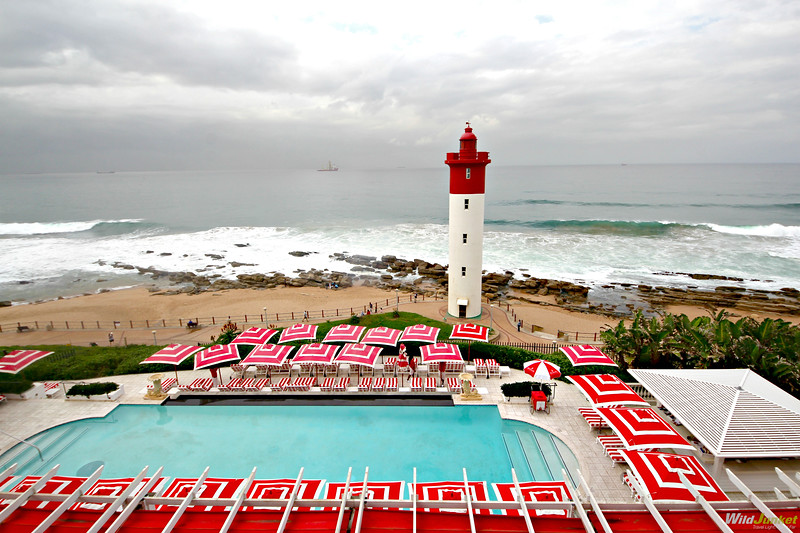 Just a few steps from the hotel gate are wide stretches of golden sandy beach, and a pedestrianised boulevard that meanders along the coastline. While the huge waves make swimming a tad risky, there are small lagoons and rocky patches that are treasure troves for crabs, clams and tiny fish to hide in. Our three-year-old daughter absolutely loved exploring every nook and cranny in the lagoon and we really enjoyed our time on the beach digging for sea slugs and chasing crabs.

Umhlanga Rocks is actually an upscale district outside of the Durban and it’s a pleasant and safe area to hang out. The village is very walkable and you can easily explore the area on foot. The   city   centre   of   Durban   is a 15-minute drive   away and King Shaka  International  Airport can be  reached  in 15  minutes.

Book Your Stay at Oyster Box 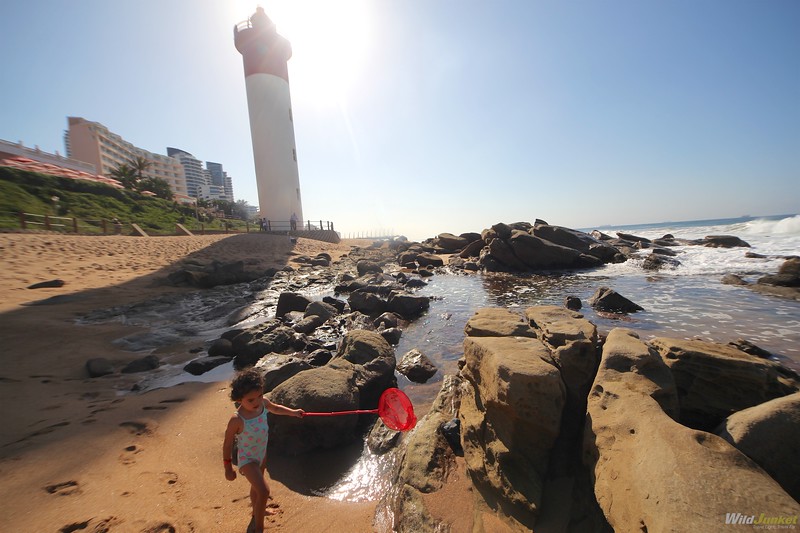 History of The Oyster Box Hotel

A large part of the legacy of The Oyster Box is that it’s been around for as long as anybody can remember. The original cottage called ‘The Oyster Lodge’ was built on the grounds in 1863. It was made of Burmese Teak, corrugated iron and re-inforced concrete.

In 1952, the cottage and overgrown grounds were sold to local residents Ken O’Connor and his sister Kay Hill. They started a tea garden, which became a restaurant and then The Oyster Box Hotel, in March 1954, on the site next to the Umhlanga Lighthouse.

Fast-forward to a few decades later, the new Oyster Box underwent an extensive two-year rebuild when the new owners Stanley and Bea Tollman, who bought the hotel in 2006. The 21st century Oyster Box finally reopened its doors for business in 2009, with all the luxurious comforts, elegance and charm of a bygone era.

The hotel has kept a number of the original landmark features including the grand, revolving door at the entrance, the reception and foyer with its black and white terrazzo tiles, the familiar wrought-iron balustrade and original, inlaid hand-painted tiles. 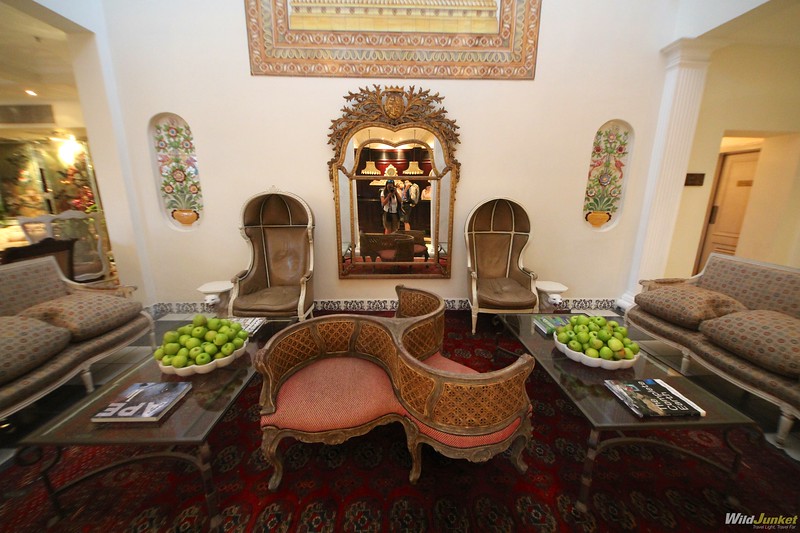 A Family Hotel Perfect for Kids

Despite being such an upscale hotel, The Oyster Box welcomes all guests alike, whether royalty, business travelers, or kids. We were so grateful to the kind hotel staff who made Kaleya feel welcomed with their warmth and hospitality.

Children of 12 years and under all receive a backpack filled with a selection of essential holiday items such as fishing nets, beachballs and colouring-books. My daughter was thrilled by the gift pack and spent the rest of the trip playing with them.

In addition, each child is given a wrist-band which entitles them to a host of complimentary goodies during their stay, including milk-shake, ice-cream and candy-floss. I’d never seen Kaleya eat that much in my life! 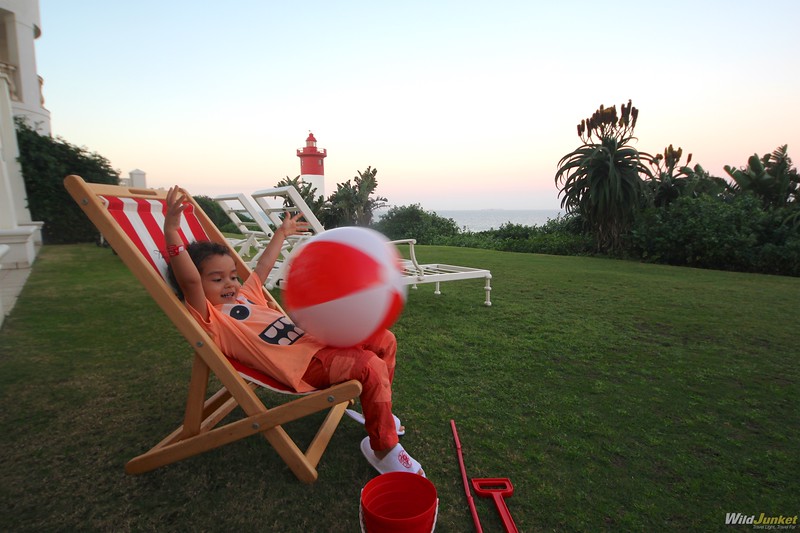 We also really enjoyed our family suite, that had a separate room with a bunk bed for kids. Kaleya was so excited to sleep in a bunk bed for the first time, she couldn’t wait to go to bed (that was a first). The room was spacious and elegant, plus we had an ocean view. Being on the ground floor meant we had a green, grassy patio where Kaleya could roam free.

Besides that, children between the ages of four and 12 years have access to the supervised Holiday Club during their stay. Kaleya was too young for that so we didn’t experience it. There were also children-focused menus in all their restaurants and on the breakfast buffet. 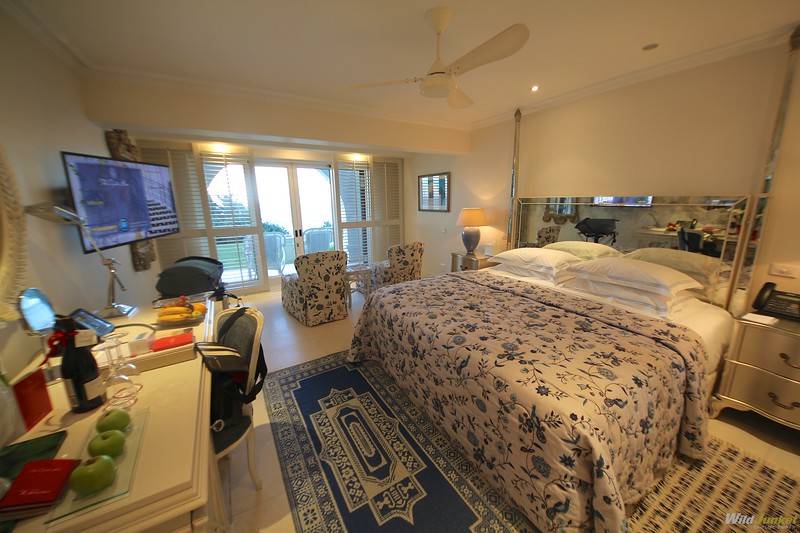 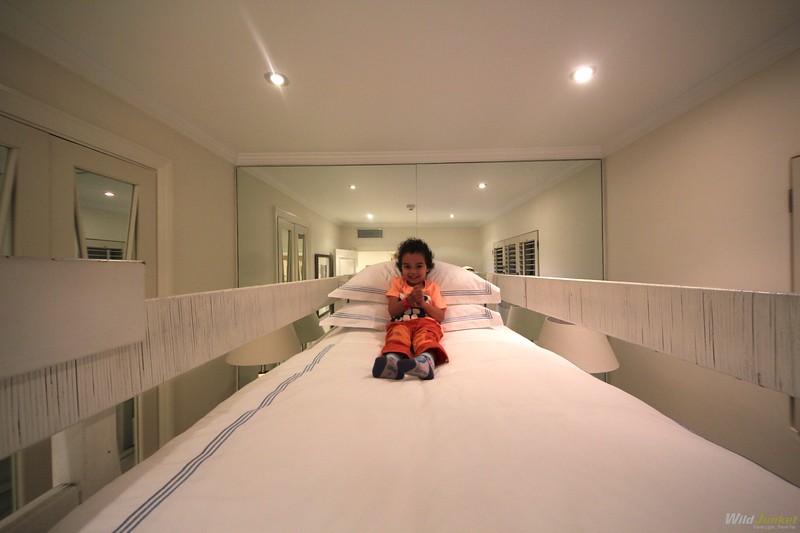 Other than kid-friendly amenities, the hotel has all the luxurious amenities all five-star hotels have:  including two heated pools: one ocean-facing and another secluded garden-facing. The Oyster Box Hotel also has an award-winning spa with a Turkish Hammam, and an impressive 24-Seater cinema with complimentary treats including popcorn, toffees and hot chocolate. Whoa!

There are eighty-six rooms and suites, including the ultra-opulent presidential suite. All the rooms are either sea or garden-facing. If you’re traveling with your family like we did, I recommend booking the sea-facing family rooms or suites that all have a separate room with bunk beds for kids. 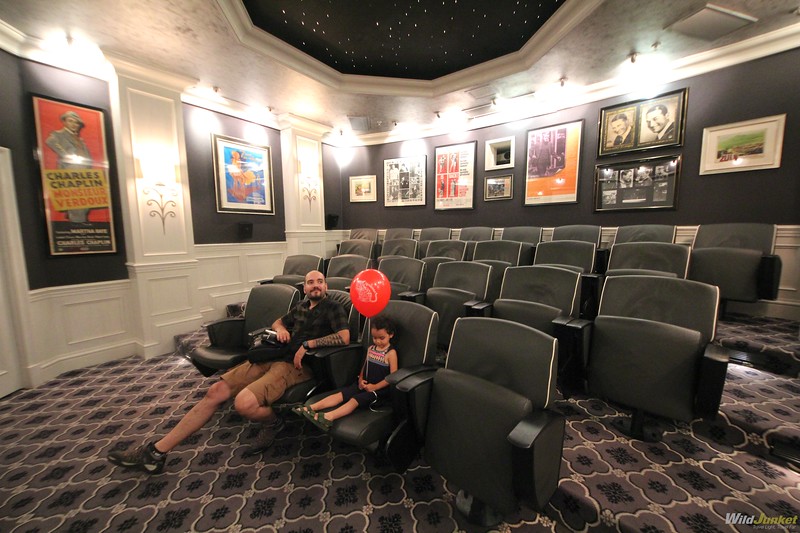 The dining options at The Oyster Box are legendary: ranging from the popular High Tea to the oyster bar and the best curries in KwaZulu-Natal. We had dinner at The Ocean Terrace one night and I completely indulged myself on the curry buffet. It’s extremely popular amongst locals and visitors alike, and I could easily see why. The variety was impressive and the sizzling flavors were authentic and truly senses-assaulting.

The Oyster Box also has four different bars spread out over the property. The Oyster Bar is definitely its signature bar, specialising in chamagne and oysters from the hotel’s very own oyster beds. It serves up fresh cocktails along with live music, overlooking the pool and Indian Ocean. One floor above it is the Lighthouse Bar, definitely one of the best places to catch sunset in Durban. It’s sexy and charismatic, featuring dark wooden panels and leather furnishing. 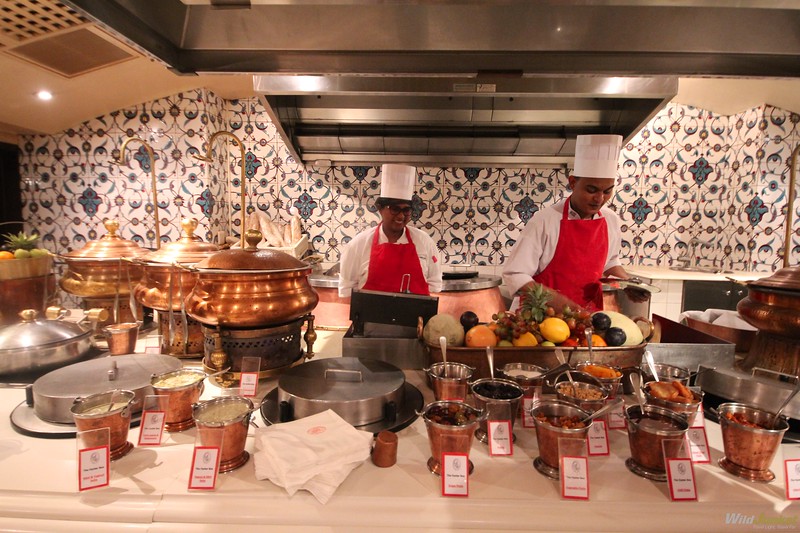 Overall Review of the The Oyster Box

I honestly didn’t expect to fall in love with The Oyster Box the way I did. We ended up spending lots of time in the hotel rather than out exploring, just because there was so much to experience and discover here.

I was looking for a family-friendly beach hotel that would be a great place to kick back and relax — but it turned out to be so much more than that. The hotel has character and history, and plenty of style. I love the white-and-red theme that runs throughout the hotel’s exterior, blending perfectly with the lighthouse. The hotel is definitely a destination on its own.

The Oyster Box Hotel has become one of our favorite hotels we’ve ever stayed at, and we’ll definitely return to Durban in future, just to stay here once again.