Dreaming of staying in an Airstream? Here’s our experience renting an Airstream camper in Malaga, Spain.

It’s true what they say: It’s the people that make travel so enriching. Over the past decade or so, I’ve met many inspiring people on my travels who have interesting stories to tell.

Trevor is one such person who made an impact on me. I recently met him when we rented his airstream, one of the coolest places I’ve ever stayed at. The gregarious Brit owns an ultra-cool airstream in the hills of Alozaina, a small village of 2,000 people in the heart of Andalusia’s countryside. He rents it out to travelers seeking something different and unique. Our encounter was a short one, but his story truly resonated with me and inspired me to think and reflect on life. A jovial man in his 60’s, Trevor is a British estate property landlord who calls himself a hippy at heart. Back in the 1960s, he did what many hippies used to do back in those days: he traveled around the world for five years, driving from England all the way to India.  During those years, he experienced living in Morocco, India and many parts of the world. After globetrotting around the world, he and his partner decided to move here, to the countryside of Malaga about 10 years ago.

They first came here to pursue a partnership with a local friend who was keen to set up a yoga school. The partnership didn’t work out but he decided to stay and ended up in the organic food industry, opening up a vegetarian restaurant chain and launching a series of products. He eventually sold that business to invest in estate properties in the UK. He’s now semi-retired, though he still runs the estate business and an internet firm. He travels from time to time for fun, but Alozaina is his home. 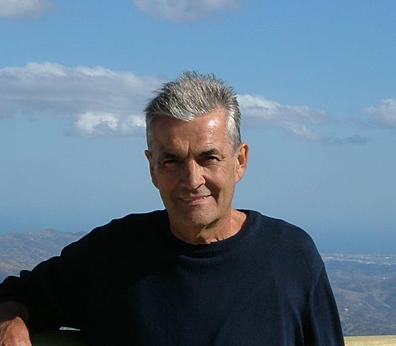 A Love Affair with the Airstream

In 2007, when he read about the newly redesigned series of Airstream, he knew he had to have one.  He went all the way to the Airstream manufacturing headquarters in Jackson Center, Ohio, and paid over $200,000 for the trailer to have it driven to Fort Lauderdale, then shipped to Southampton and eventually driven here to Malaga, his home.

Modeled on the original 1930’s classic, his limited edition Airstream trailer was designed by the famous architect, Christopher Deam, who has received countless awards for his innovative work in product design. Through his award-winning trailer designs, Christopher has literally helped revitalize an American icon. His spirit of modernity brings the great outdoors and the indoors together with incomparable inventiveness.

“This isn’t your average RV,” Trevor explains with a sparkle in his eyes. “Airstream is something special. Some people think of it as an aluminum caravan, but it’s much more than that.”

Indeed, Airstream is a product of ingenious engineering and a vintage collector’s favorite. The luxury RV brand began in 1931 with Wally Byam’s dream: to build a travel trailer that would move like a stream of air, be light enough to be towed by a car and create first-class accommodations anywhere. Every inch of an Airstream has a function. With millions of miles spent on the road, Airstream is the oldest and most thoroughly tested brand in trailer history.

Sharing this Unique Place with Others

Trevor bought this Airstream for himself as a collectible and a holiday home. It’s so precious to him that he has it parked in his backyard, just a hop from his house in the countryside of Alozaina.

“When I want a holiday, I come here to my airstream. It makes me feel completely relaxed and immersed in nature,” says Trevor.

I can easily see why. It’s an ideal setting for a solitary retreat: the Airstream is set amidst tall pine trees and looming mountains. The surrounding scenery is stunning, and there are plenty of nature trails and treks to be explored.

The Airstream itself is fully equipped with mod-cons like WC, shower, a comfortable double bed, dining area, sofas and flat-screen TV, air-conditioning and a complete kitchen. It’s absolutely self-sufficient and definitely glamping at its best. Trevor has also built an outdoor deck right by the Airstream, where he can enjoy some sun on the lounge chairs and then take a dip in the plunge pool. A year and a half ago, Trevor decided to rent out his Airstream to travelers seeking an unconventional experience.

“I just want to share my Airstream with others,” Trevor beams with pride as he looks fondly at his Airstream.  “I’m not out to make money, I do this for fun, i love meeting interesting people.”

Trevor shares that the Airstream seems to attract particularly interesting people with unique background. Just last week they had a Swiss-Hongkonger couple  who had come to escape the stress of their banking jobs. They had asked Trevor for suggestions on things to see around here but they ended up just relaxing and lounging in the airstream. At the end of their trip, they went home relaxed and completely rejuvenated.

His Airstream has drawn so much interest that many news and publications including a Spanish national TV channel have approached him to feature his Airstream. But Trevor wants to keep this place exclusive and special, and has turned down all these requests. A Way of Life

Over the past few years of renting out his Airstream, only one couple had been unhappy about their stay.

“The Airstream is not for everyone,” shares Trevor. “Airstream people are those who look for an alternative, bohemian way of life. They don’t like convention and conformity. “

We, of course, absolutely loved our stay at the Airstream. Just like others who have stayed here, we wanted to kick back, get unplugged and let our hair down. And we did just that. All weekend, we didn’t do much but relax. We spent long, lazy mornings in bed with our three-month-old baby, and then chilled outdoors by the plunge pool in the afternoons. We even found time to go on short walks in the forest and wander around nearby villages. In the evenings, we would make delicious steak in the airstream’s kitchen and eat under the stars. We couldn’t have asked for a more perfect glamping spot.

By the end of our stay, we were in absolute bliss. We knew we would be “airstream people”, as Trevor called it. It was a privilege to be part of this exclusive group of people.

READ NOW
13 Things We Love About Traveling in a Campervan

Find more out about Glamping Airstream on their website or book through glampinghub.com. Prices start from €105 per night and €695 per week.

Disclaimer: Our stay was made possible by Glamping Airstream, but as always, all opinions expressed above are my own.