Nagaland, India: The Last Outpost of the Headhunters

Here’s a story from my friend, Marco Ferrarese, about his experience traveling Nagaland, India. If Nagaland piques your interest, join me on a group trip to Nagaland for the Hornbill Festival tour in December 2017 — find out more here! 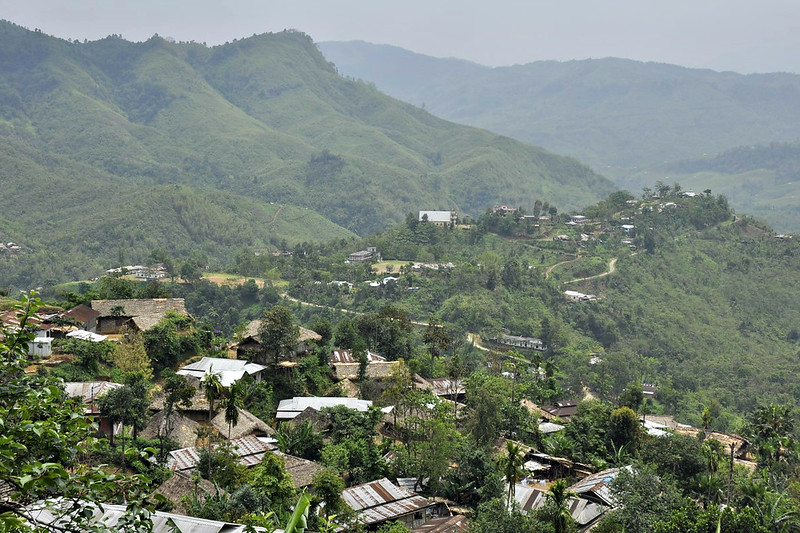 “Look,” the passenger next to me says, peering at a spot where the dirt road clings dangerously to the hillside. “That’s where the bus went off the road.”

My seat shakes as the tires struggle in the hardened mud. Behind a blurred whirlpool of dust, I can clearly see the gap where the public bus had careened off the road a few weeks earlier. It looks as if it had chosen that precise cliff to fall to its death, tearing off trees in a last attempt for survival. Its rusted body juts visibly from the hillside, eaten slowly by jungle vines and vegetation.

If your idea of India is the Taj Mahal, a camel stroll in the Rajasthani desert, or sipping sweet chai on a bustling street, think again.

Welcome to Nagaland, India: a raw Northeastern state that rarely appears on anyone’s India itinerary. This is a land of rugged hills and tribes where ancient headhunting habits have collided in a train wreck against the Burmese identity, leaving modernity derailed.

Nagaland finally levied a Restricted Area Permit in 2012 and is now accessible to independent travelers; but this change hasn’t made venturing outside of capital Kohima or transport hub Dimapur an easy affair. Due to the lack of infrastructure and political conflicts, exploring the Mon district independently is a test of endurance.

This is a land of rugged hills and tribes where ancient headhunting habits have collided in a train wreck against the Burmese identity, leaving modernity derailed .

This rugged borderland is home to the Konyak people, an ethnically Tibeto-Burmese group that has expanded into India from the adjacent Mon state of Myanmar. Here, the Indian subcontinent fades into a malaria-infested jungle that has given Burmese drug lords and kingpins a safe hideout for decades.

READ NOW
India Itinerary: How to Spend 2 Weeks in India 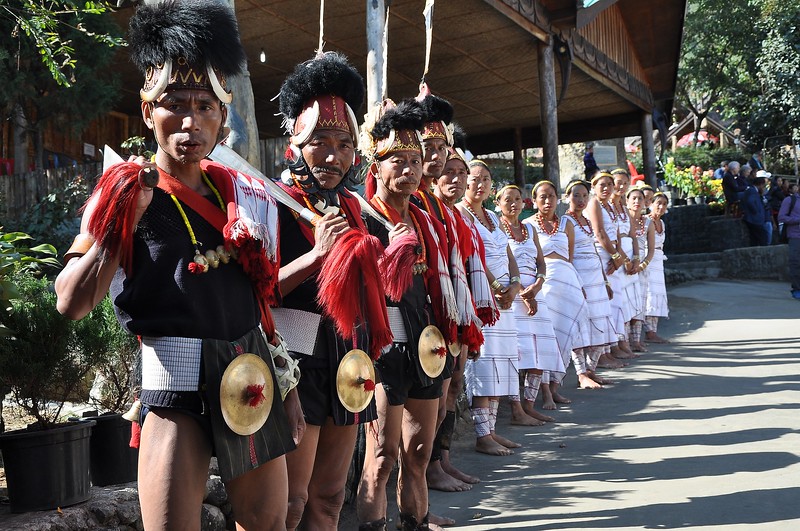 Into the Heartlands of Nagaland

Luckily, we roll safely past the ill-fated public bus ride. Soon, though, the shared jeep we’re traveling in sputters to a halt in the midst of the dirt road. It feels as if someone’s cast a strong protective spell over Mon district, one with the ability to able to switch off engines and drive buses down steep hillsides.

The driver stops toying with the ignition, and my thoughts are interrupted by fellow passenger Alan as he grips my arm firmly. We pile out of the jeep, relieved to notice the airborne dust settling. We gather at the back and push, all four of us kicking against post-monsoonal sunbaked mounds of grey earth. After a long minute, the engine comes back to life, coughing up black exhaust like a sick man gasping for fresh air.

Looking back over the jeep’s roof, sharp metal chimneys dot the horizon, exhaling curvy lines against a rugged mountainous backdrop: it looks like we really have reached the edge of the world.

Mon village stretches out in front of us: dozens of flimsy wooden houses coat the dark hills with soft shades of brown, their thatched roofs balancing with dexterity against the slopes’ curves. As we scan the horizon, Alan offers to take us in as his guests for the following days, and we begin to make our way to his home. 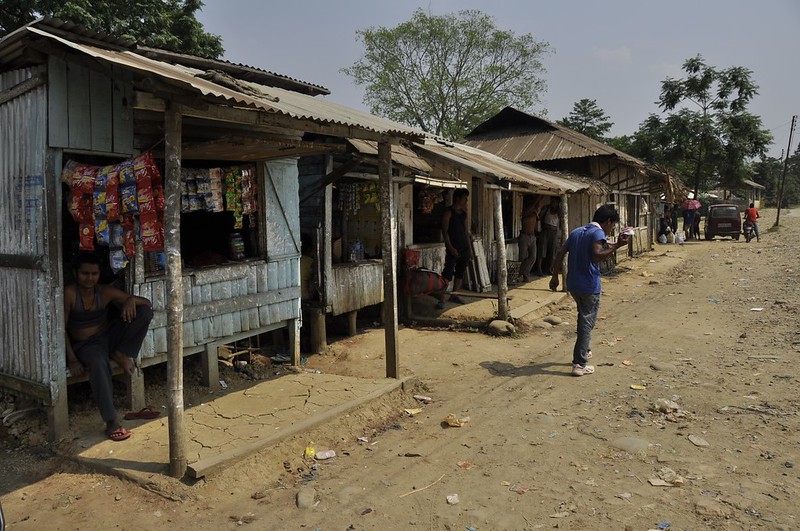 As a local Konyak, Alan is a student and is finally returning home after 200 miles (320 km) of third-class travel in the packed Guwahati train, as there is no closer university. His ability to speak both fluent English and Konyak is our only hope for making some sense of this unfamiliar environment. All 16 main tribes of Nagaland speak different, mutually unintelligible languages, but at least in Mon, Alan can help make communication a little less difficult.

As we walk down the winding path towards Alan’s home, curious eyes peek out from door frames. This is probably not their first contact with foreigners, but villagers young and old seem quite interested in us, abandoning their errands and reaching for their front gates, their faces following our steps with curiosity.

Alan’s house is a marvel of eco-technology. Built at the top of a slope, it has been weaved by hand, thatch by thatch, a skill passed down from the older generation. “I learned from my father,” he explains, “before he died.”

When he shows us his room – a stilt hut complete with a veranda built entirely by himself – I feel completely humbled by how Alan lives, without the first-world comforts I’m used to. Plumbing is provided by the nearby stream: each time we need more water, Alan disappears down the forested slope and returns with two buckets filled to the brim.

This scene paints a clear picture of Nagaland’s clashing realities: one of unadulterated tribal tradition, the other a version of suited-up Catholicism. 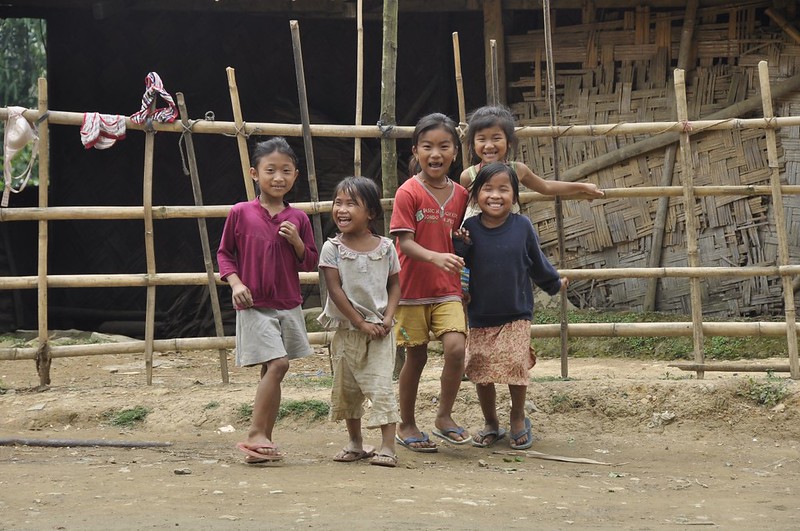 “I live here with my two younger sisters,” Alan continues as he prepares some tea. “Our older brother has an electronics shop in the town center.”

I ask him whether we’ll have the pleasure of meeting his brother later in the evening, but Alan shakes his head, “I’m afraid not. He works and sleeps in his shop. It’s a few kilometers’ walk from here.”

The pot steams over the fire, and our cups are promptly filled to the edge. As Alan serves tea, I observe him. His almond eyes, bronzed skin and short nose resemble those of the people I met a few years back in Northern Myanmar. If he were wearing a longyi instead of a collared t-shirt and jeans, I’d believe I was still in Southeast Asia rather than sipping tea in the wilds of Northeast India.

We spend the rest of the night around the intimacy of the fireplace, moonlight and candles keeping the darkness at bay as Alan’s sisters prepare rice and vegetables. Before we all pick up a flame to light our final few steps to bed, we have a go at cultural exchange in the form of guitar riffs.

In fact, like their neighbors in Myanmar, the Konyak seem to be gifted singers and musicians. We seal our newborn friendship by singing traditional local songs alternate with Western classics, and our impromptu jam session fills Mon’s star-peppered night sky with copious doses of laughter. 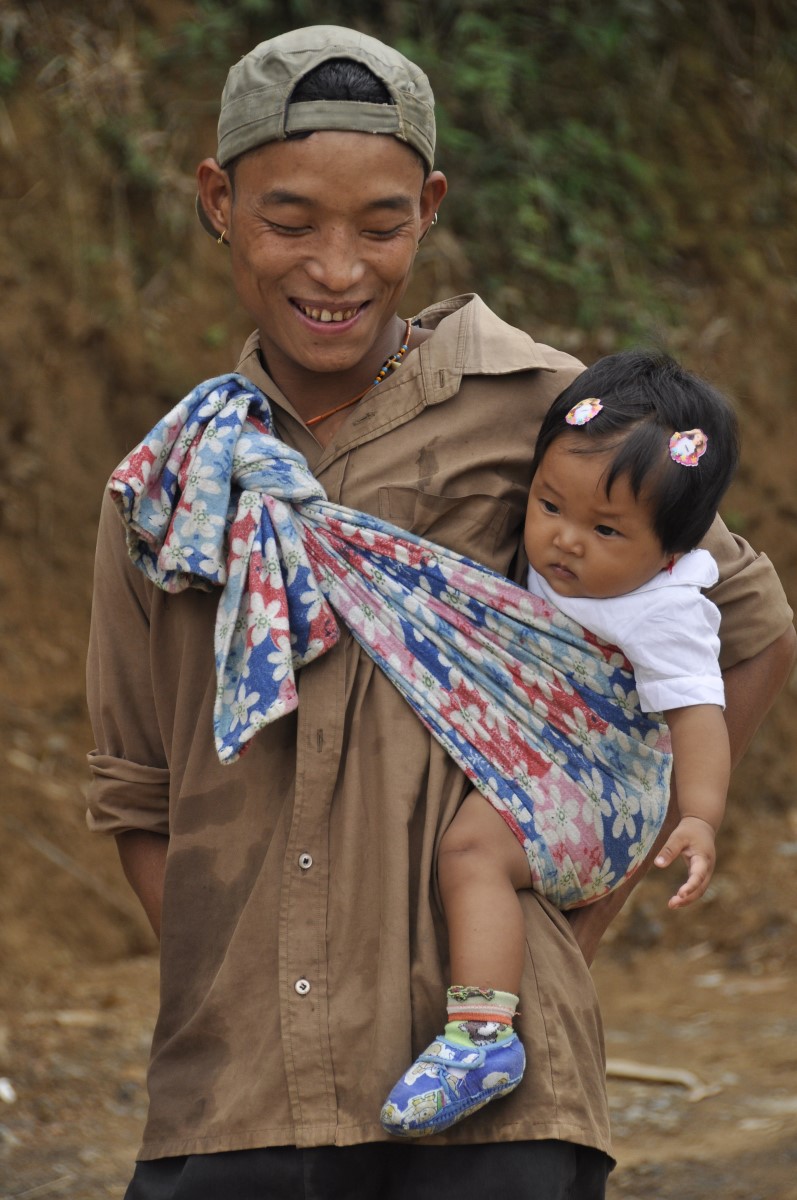 When missionaries arrived in Nagaland at the end of the 19th century, they used Christianity to purge the area of bloody tribal wars. Soon, piles of human skulls disappeared from the front of houses where they used to sit as trophies. For the Nagas, heads meant power and war prestige, often displayed by emblazoning golden faces in traditional warriors’ necklaces.

But today, as we walk to the small city center, the poltergeist of clan conflict appears sedated: it looks back at us from the tiny eyes of old men with darkly tattooed faces, who suck up oblivion from their opium pipes. Some crouch low next to households, hiding their skinny legs behind rugged loincloths. They seem to be waiting for a time-warped train ride that will never come.

As we approach the main junction, a local man insists on taking us to visit a foreign resident of the area. We decide to follow: behind the corner where the only, faulty ATM in town stands, a road branches off and takes us to the front of an austere old building.

A Norwegian man working for Doctors Without Borders watches us from behind the compound’s gate. “I just arrived in Mon,” he says. “Why are you here? This isn’t a usual travelers’ destination.” He explains that he goes out on missions to nearby villages, inoculating vaccines and plastering up broken limbs.

“I was serving in Sudan prior to this,” he continues, “and spent six months in Myanmar. I believe the medical situation here is worse, because of the malarial areas.” 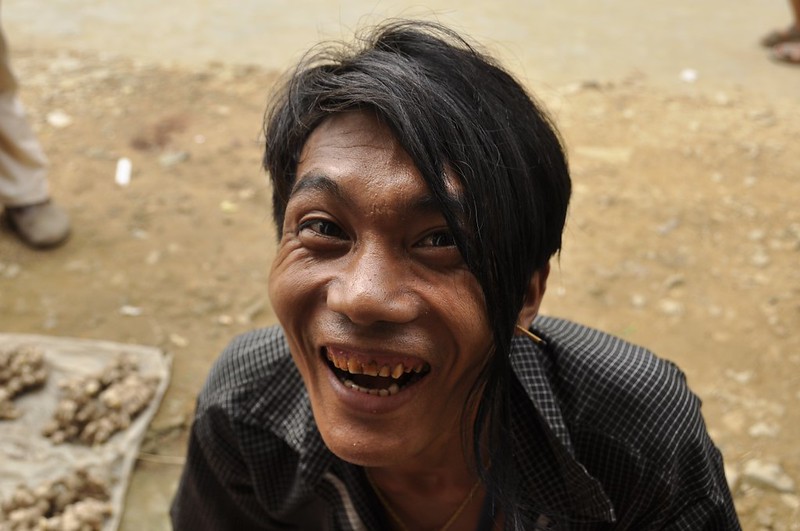 Just beyond the corner of the compound, people squat at the curbside, rapidly swapping goods for rupees. Women who have descended from nearby mountains pull a plethora of colorful goods from their sackcloth bags. But as we enter the market, the transactions slow to a halt, and we are confronted by grave looks, as if we’re disrupting the order of daily Konyak life.

The tension is palpable but it sizzles down once we motion our innocent intent to snap some pictures. The static hostility is really only a cover for extreme shyness. After that, it becomes hard to satisfy all of the impromptu requests, until we’re rescued by a German woman who serendipitously stumbles into us on her way to lunch.

She’d arrived in Mon from Kohima, and tells us that over there “it is not the real Nagaland.” According to her, Mon is the place to be if someone wants to fully understand the state’s culture, but she moves onto the topic of lunch before we can ask her more about the cultural differences.

“You have to be fast if you want to eat something. It’s Saturday afternoon, and soon they will be closing everything up for the weekend,” she explains. “It’s church time today, and God rests tomorrow. They take Christianity very seriously around here.” 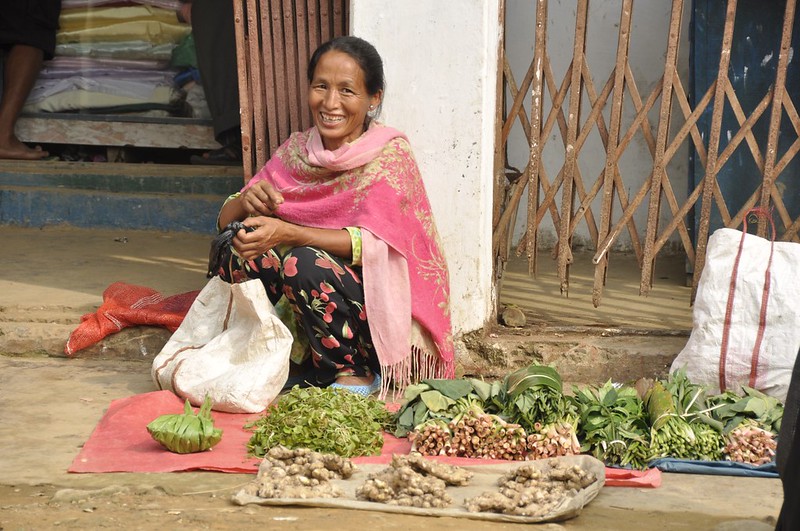 Stocking up on essentials, we venture around the emptying streets, receiving plenty of invitations to join passersby on their way to church. Soon, we’re surrounded by a group of men wearing suits and ties, their black, polished shoes painting a harsh contrast against the reddish mud they tread. The men walk arm in arm with women in long dresses and hats, who look like they’ve strolled out of a 1960s black and white movie.

Their invitations, however, are interrupted when an old tribesman clad in a dirty loincloth rocks onto the road from the forested slope, looking completely lost. His eyes are vacuously chasing an invisible skull that has been forced into extinction. The scene paints a clear picture of Nagaland’s clashing realities: one of unadulterated tribal tradition, the other a version of suited-up Catholicism. 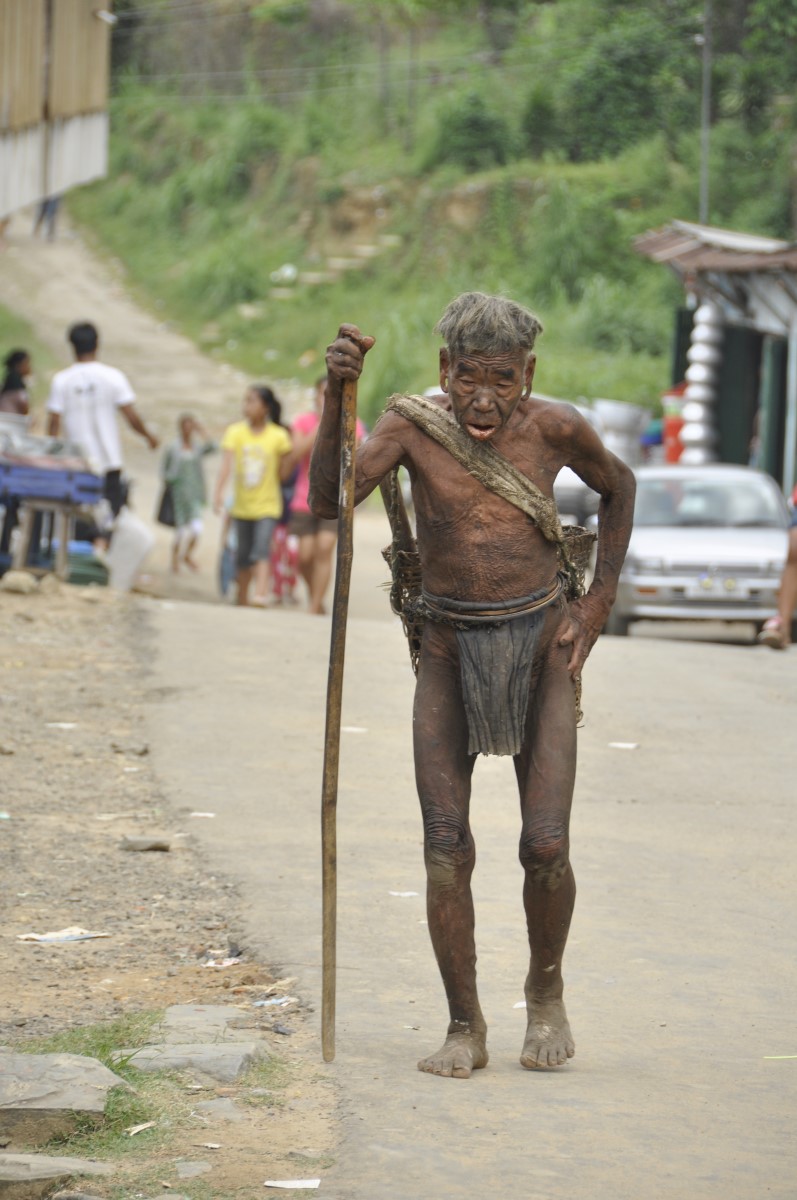 One of the churchgoing men chases the old tribesman off with a chastising stare. “Don’t mind him; he’s crazy,” he explains. “He lives alone in the forest, like an animal.”

In a way, it all makes perfect sense. The hills, once washed and sacralized with the blood of prestigious clansmen, are now slowly giving way to the changes of modernity, its road paved by extreme Catholic devotion.

I remain sceptical as the old tribesman continues his hunt down the hill of the past, and the believers rushing to the church in the opposite direction, leaving us stranded in the midst of the road. As we make our way back to Alan’s home, I realize I’ve rarely visited a place so contradictorily stuck in a dimension all its own.

Modernity, in Nagaland, is still waiting somewhere else to enter, unaware that it’s already warmly welcomed.

JOIN ME IN NAGALAND!

Join Me on My Nagaland Hornbill Festival Tour!

This article was originally published in WildJunket Magazine. It has also been published in Marco’s third book, “The Travels of Marco Yolo“.  All photos above by Marco’s partner, Kit Yeng Chan.

About the Author: Marco Ferrarese

Marco Ferrareseis is a Penang-based travel writer and book author. He also shares his decade-worth Penang experience on www.penang-insider.com and runs an adventure travel blog for 30+ couples, www.monkeyrockworld.com.