The walkie-talkie crackles. Our guide Benjamin listens intently and whispers back in the local Rukiga language. “We’ve found the gorillas. A male and a female. They are just ahead,” he announces. “Are you ready?”

We drop our bags and proceed in silence through the thick and wet jungle with nothing more than our cameras. Even our porters have left us to our own device. Walking at the end of the line in our group of eight,  I pick up my pace. My heart is racing in my chest – the mountain gorilla is one of the world’s most endangered animals and I may be on the verge of my first sighting.

As we emerge from the thick bush, I hear sounds of leaves brushing against one another, before I see them. A sense of awe sweeps through me and my eyes grow wide in bewilderment. My Experience Gorilla Trekking in Uganda

A pair of mountain gorillas are lying quietly under a tree, nestled in a bed of thick fronds. Both of them look on serenely, lounging around like a pair of lovebirds enjoying an afternoon out in the park. We tiptoe our way around them and their eyes follow us. Officially we’re not supposed to get closer than 7m, but the only way past is the trail we’re on and that brings us within a meter or so from them…

“The male is the one that is lying down,” whispers Benjamin. “The other one that has her arm lying on him is the female.”

At first, we go crazy with our cameras, snapping like over-enthusiastic paparazzi. But eventually, we’re all hit by the fact that such moments are hard to come by. It’s so easy to get caught up and forget how privileged we are to be here — this close to an animal of this size and stature in the wild. We stare dumbfounded, eyeball to eyeball with the pair of beautiful giants. Traipsing our way through the thick and lush Tarzan-like jungle setting, we are in the heart of one of the wildest landscapes on Earth. Situated along the border with Rwanda and the Democratic Republic of Congo in East Africa, the Bwindi Impenetrable National Park in southern Uganda is 128 square miles of wild jungle, thickets of ferns, flowing streams, impervious vegetation.

Listed as a UNESCO World Heritage Site, the forest is one of the richest ecosystems in Africa and is home to over 120 species of mammals, 348 species of birds, 220 species of butterflies, 27 species of frogs, chameleons, geckos and many endangered species.* Of all the species, the mountain gorilla is the star of the show. 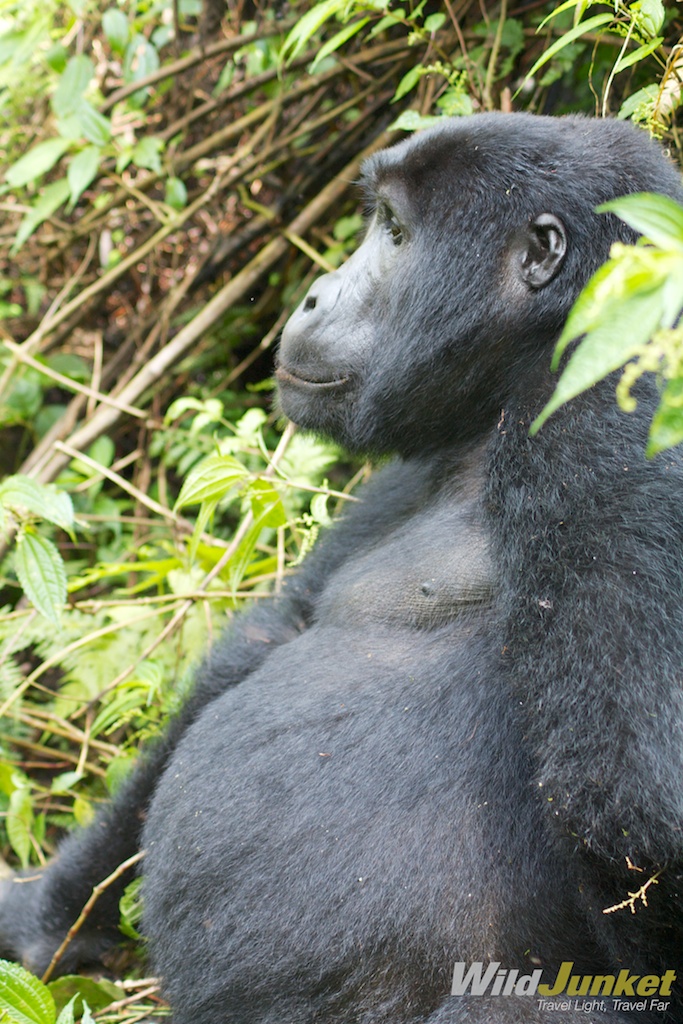 There are only 700 mountain gorillas left in the world and the Bwindi Impenetrable Forest is home to almost half of that. Although numbers are increasing, they are still listed as ‘critically endangered’. Mountain gorillas are the most famous and most expensive to visit wild apes (if not animals) on earth — with gorilla tracking permits in Uganda (which only give you one hour with the gorillas) going for around US$750. Revenues largely fund their other national parks, as well as hundreds of community projects.

Visits are tightly controlled to minimize negative impacts on the gorillas, with only one group of eight or fewer visitors per habituated gorilla family, for one hour per day. Based on the strict rules and regulations, it’s evident that the Ugandan government is doing a good job protecting the gorillas and their natural environment. In fact, from what I heard, the government is giving so much emphasis on the gorillas that the average lifespan of a mountain gorilla in Uganda is now at 52 — higher than the average life expectancy of Ugandans.

Gorilla trekking, however, is no stroll in the park. The length and difficulty of your trek depends on which gorilla family you’re assigned to by the authorities. The rainforest is full of horrible stinging nettles and the mountain slopes can get muddy and slippery especially after the rain. As what you would expect to find in an ‘impenetrable forest’, sprawling vines dangle from above, thorns easily pierce through trousers and shirts, and twigs often appear sharply out of nowhere. Bushes and undergrowth can be so thick that it’s easy to step in and get entangled within a thorny thicket.

Prior to this, friends who had done their trek on the previous day warned us about the challenging terrain. They had hiked for three and a half hours, through vertiginous slopes and hair-raising conditions, before having their first gorilla sighting. They were all thankful to have had hired porters who not only carried their daypacks for them, but also helped them up and down slippery and steep parts of the hike. One of them even said, “I don’t think I would have made it out of the jungle without my porter.”

Thankfully, our group is assigned to track the Bwenza family, one of the five habituated families in the southern part of the national park. We are extremely lucky — it only takes one and a half hours of leisure hiking, up and down gentle slopes and crossing just one small stream, before we find the first pair of gorillas.

Even though I didn’t really need help, I am still glad I hired a porter. Charles, only eighteen years of age, is quickly becoming my new friend. We chat along the way and he tells me all about his family, his hometown, and his Rukiga language. He doesn’t speak much English, but he is clearly eager to learn. “My English no good, I go to school now to study. Next time I become guide.” I give him a wide smile and wish him best of luck.

My First Glimpse of the Silverback

A loud grunting sound suddenly echoes through the jungle. With the trackers in the lead, we move downhill, past moss-covered logs and over thick ferns, towards a clearing.

There, an enormous silverback sits regally, as if on his throne, munching his way through leaves and branches, blithely ignoring our presence.

Through the dangling vines and banana leaves, I can see a patch of shiny silver fur on his lower back, shimmering under the sunlight. This gorilla is clearly much more sizable than the pair of teenagers we just saw. He is much bigger than I imagined. We stand in a horizontal line, moving cautiously and quietly, striving for a better view. He sees us, but continues to chow down branches by the kilos.

“This silverback is called Kakono because of his crippled right hand,” Benjamin introduces us to the leader of the Bwenza gorilla family. “There is usually just one silverback in each family, although when he dies, the next alpha male replaces him. Silverbacks can weigh around 200kg and live up to 50 years of age.”

Benjamin and the trackers know every single member of the habituated gorilla families by name and identify each of them by their personality and physical traits. The trackers have been working in Bwindi Forest since the national park was gazetted in 1991. Every morning, they head out one hour in advance to track the gorillas. They then convey their location to the guide through the radio. Every habituated gorilla in the park is thus monitored closely by the rangers and trackers.

After feasting on a whole cluster of vegetation, the silverback lazily thrusts his backside into the air and stands on all fours to face us. Now he appears a lot more intimidating than before. We unanimously take small steps backwards. Benjamin shouts, “Don’t move!”

The silverback starts moving towards one of our group mates who happens to be pointing his SLR camera and massive lens right at the gorilla. He stays completely still while we all hold our breathes and pray for him silently, fearing that the gorilla might charge at any minute. Thankfully, the trackers raise their comparatively pathetic fists in the air and the silverback stops in his tracks, glares at us, then begrudgingly retreats behind a tree. We all let out a huge sigh of relief, overwhelmed by the intense moment.

Too Close for Comfort

We continue to trek up the muddy slopes, this time further deeper into the jungle and higher up steep moss-covered slopes. According to Benjamin, the Bwenza gorilla family has 10 members — but besides the pair of young lovers and the silverback, the rest has yet to make an appearance.

Then a sudden thrashing above our heads sends my pulse leaping — is a gorilla about to pounce on us? He leaps and bounces off the canopy, just inches away from us, and disappears into the distance.

However, within moments, another young gorilla follows his trail. This time, a female gorilla charges at one of the trackers, raising her fists in the air and shattering the silence with her shrieking. Our tracker somehow stands his ground and swings his machete in all directions, visibly scared. The hefty gorilla stops in her tracks a couple of feet away and stands staring at us. Her stare is an intense and scary one, as though she wants us out.

Benjamin announces then, “Your hour is up, it’s time to leave.” It feels like the shortest hour of my life, and yet, it’s been an intense and exhilarating hour. It’s time to go, and the gorillas clearly know that.

READ NOW
Morocco with Kids: My Guide to Planning a Morocco Family Trip

Don’t forget that even though these mountain gorillas have been habituated, they are still considered wild animals – you are not in the zoo. Respect their environment and their behavior. According to our guide, there has never been an accident of a gorilla attack in Bwindi National Park.

Here are some general guidelines and  tips to keep in mind when trekking gorillas:

How to Go Gorilla Trekking:

This gorilla trek was offered as an optional excursion by Africa Travel Co on the  24-day Gorillas, Game Parks and Zanzibar trip. The one-day excursion costs US$582 which includes the tracking permit, guide and transfer from Lake Bunyonyi.

It is extremely expensive but once you lock eyes with a gorilla, you’ll know it’s well worth the money. I’ve seen many kinds of wildlife – from penguins in Antarctica to lemurs in Madagascar, and this ranks high on my favorite wildlife experiences.

Gorilla sightings are guaranteed as trackers and rangers closely monitor them to know their locations. You are only allowed one hour with the gorillas, no matter how much time you spent hiking to find them. You may spend anything from 30 minutes to five hours hiking, depending on which family you are assigned to.

Disclaimer: While this trip was made possible by Africa Travel Co, I paid for this gorilla tracking experience myself. All opinions of course are my own.