We were lucky enough to celebrate WorldPride in Madrid last weekend! Here’s what we got up to: 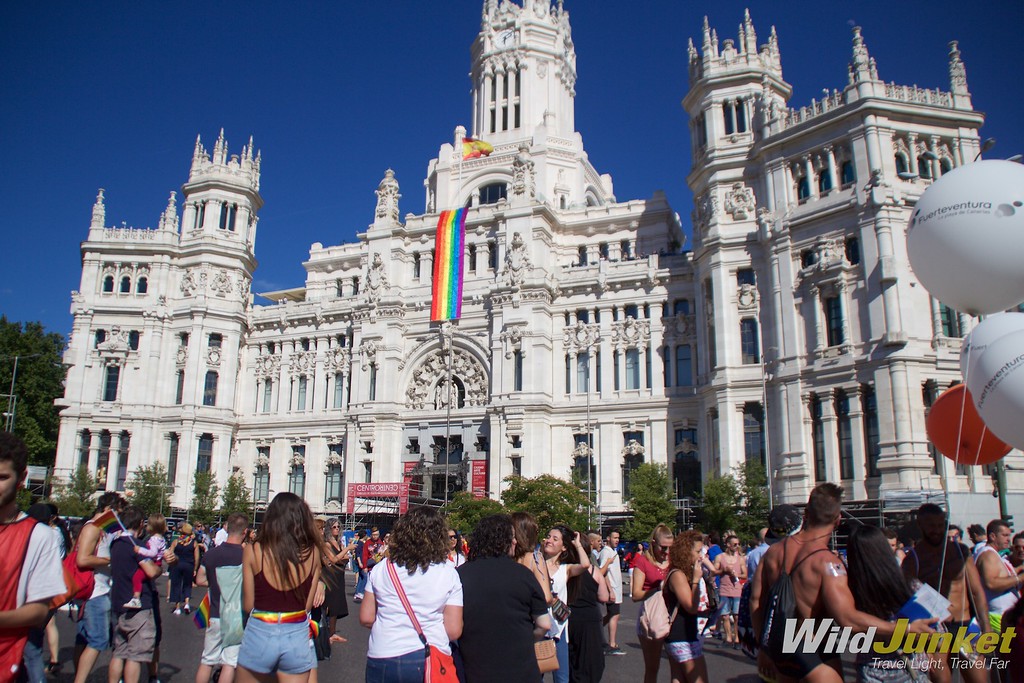 From 23 June to 2 July 2017, WorldPride was celebrated in fervor in the Spanish capital city of Madrid. It was the world’s biggest LGBT pride celebration, with about 2 million participants descending upon the city to participate in this large-scale event.

We took the opportunity to visit Madrid during WorldPride and watched as the city transform into the capital of gay pride over the 10-day event. It felt great to return to the city we used to call home (we lived in Madrid from 2007-2008), and to visit old friends and places we used to hang out at. But this trip was more fun than usual as there were so many activities happening during WorldPride.

Free outdoor concerts, festivals, culture activities as well as sport events were dotted all around the city. Parades and races, and even workshops, were held to promote LGBT issues. There was a carnival atmosphere everywhere we went. Chueca, the gay district of Madrid, was even more vibrant and flamboyant than usual. There were rainbow flags flying around and every bar/business had a special party going on. 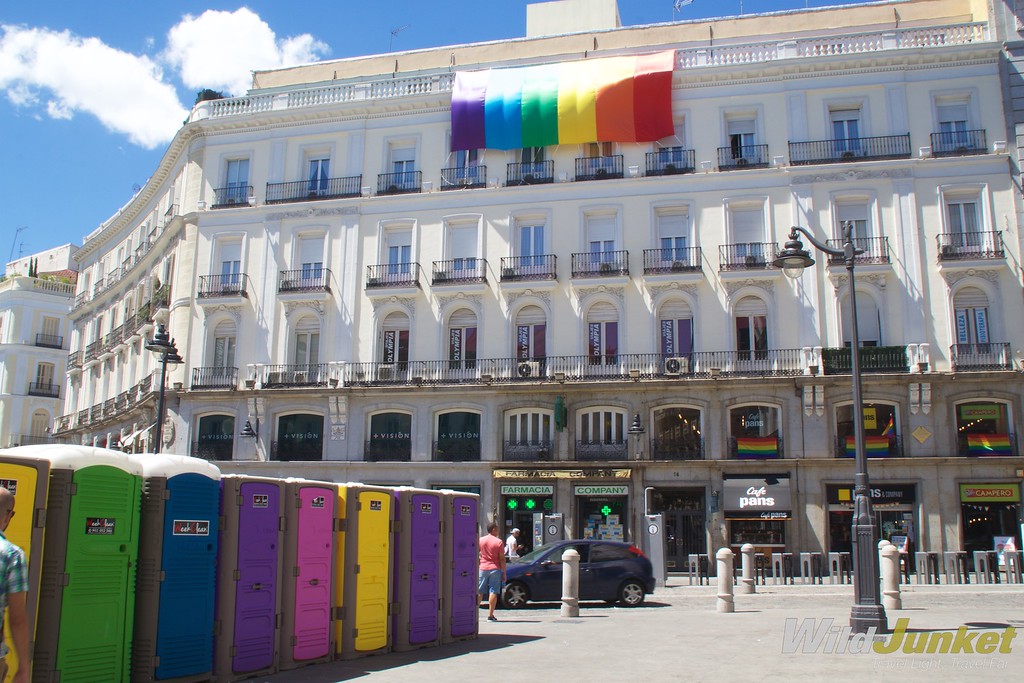 It’s no surprise why they chose Madrid to host this year’s WorldPride. Since the 1980s, the city has had a large and active LGBT community. In fact, they’ve fought hard for Spain to have one of the most advanced legislations in the world regarding equal rights for the LGTB community.

As strong supporters of LGBT rights, we couldn’t have been happier to be part of this important event that marked a milestone in their history. Nothing said it better than the motto of WorldPride 2017, “Whoever you love, Madrid loves you.”

“Whoever you love, Madrid loves you.” 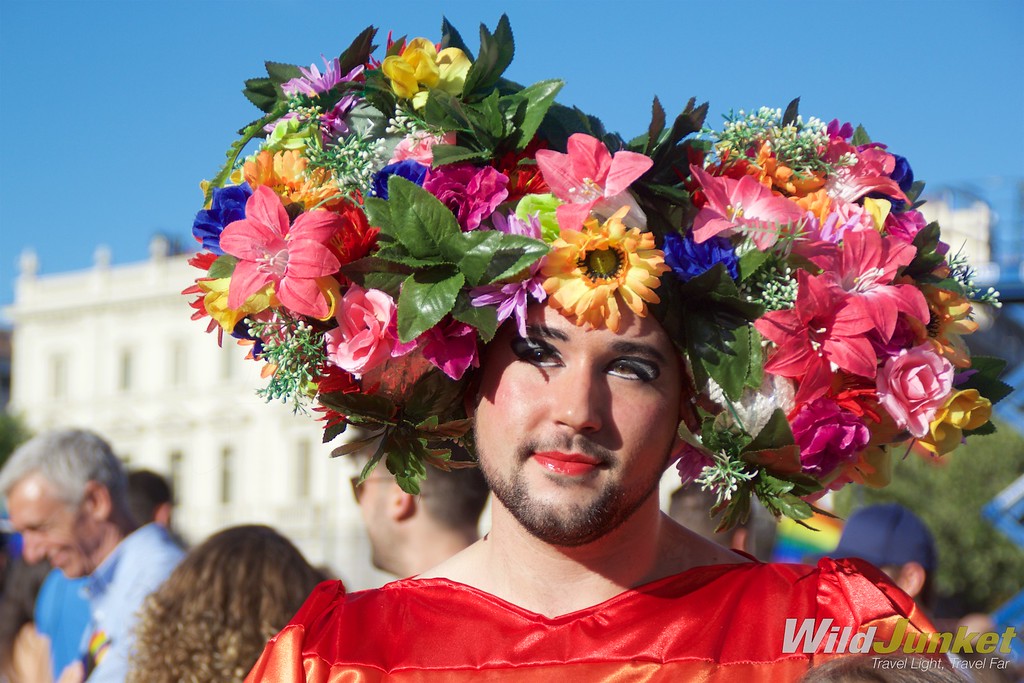 Even though celebrations took place all over the city, Chueca was the place to be for World Pride Madrid 2017. Chueca has been the heart and soul of the LGBT community in Spain since the 1980s, having witnessed the first manifestations for LGBT rights. Today Chueca is one of the most liberal, tolerant and diverse spaces in Madrid and that’s what I love about the area.

During WorldPride, Pelayo Street hosted the famous high-heeled race, where men ran a race in high heels in a bid to win the grand prize from LL Bar. But besides the parties and pride activities, there’s plenty to see and experience in Chueca, from the intriguing Longoria Palace and House of the Seven Chimneys, to the alternative Fuencarral Street and the bustling San Anton Market.

To get beneath the surface of Chueca, I recommend exploring Madrid with locals — literally. We booked a Withlocals tour with Jorge, who charmed us with his humor and infected us with his passion for Madrid. Jorge is fun and knowledgable, full of stories and anecdotes to share, and he gave us interesting insights into Madrid’s LGBT world. Having lived in Madrid before, we are pretty familiar with the city, but Jorge showed us places we didn’t know existed and taught us about all things Spanish – from the food to traditions and much more.

If you do book a Madrid LBGT tour, I highly recommend getting in touch with Jorge and letting him know what you’re looking for. 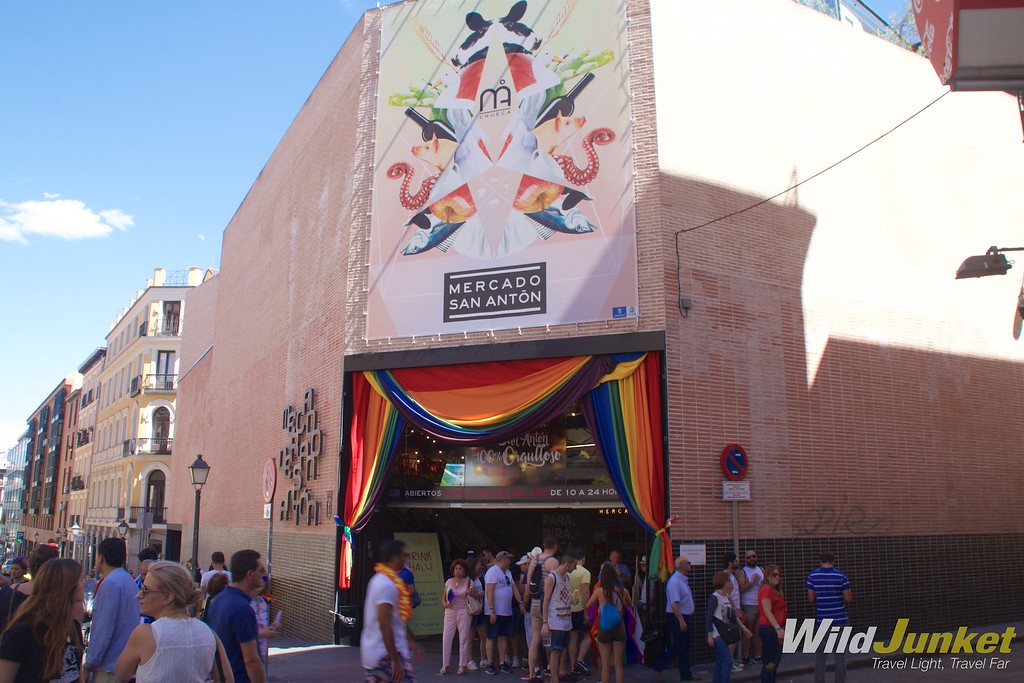 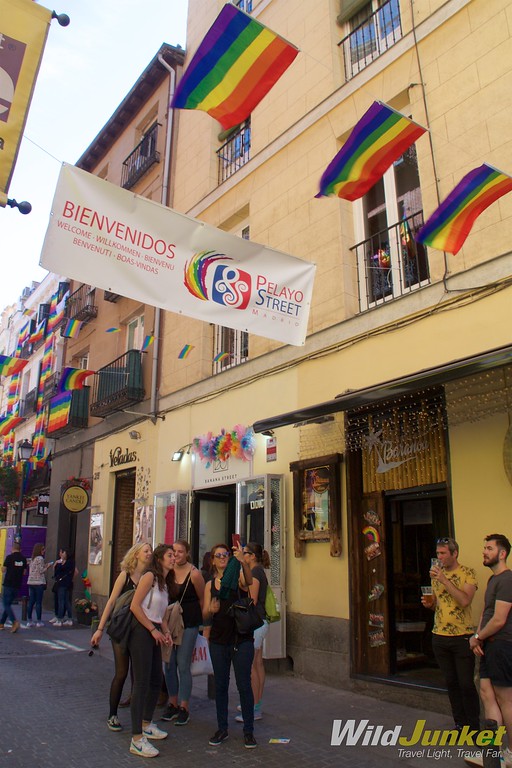 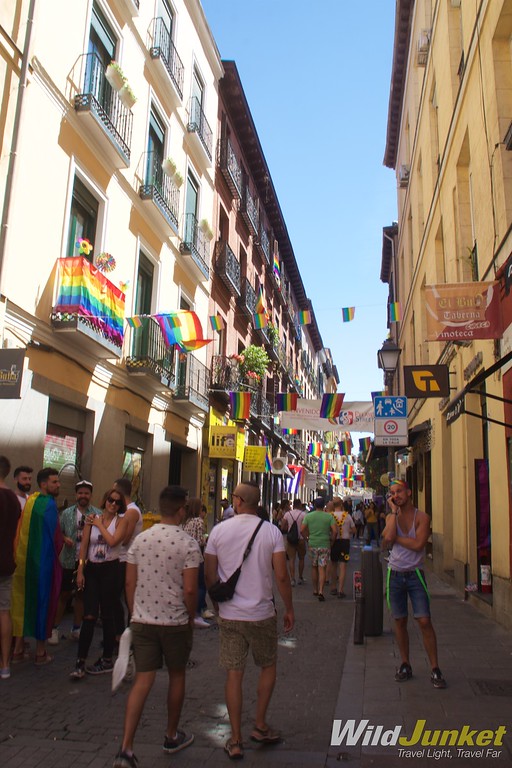 At WorldPride Madrid, we spent most of our time outdoors and enjoying the free concerts all around the city. Seven outdoor stages were set up all over central Madrid, with the biggest at Plaza de Alcala (next to Park  Retiro), Plaza de España and Puerta del Sol. Many of these squares were converted into large open-air concert halls, dotted with booths selling cocktails and beer.

Music performances took place through out the week, with appearances from famous singers like Marta Sanchez and Carlinhos Brown as well as international LGBT DJs. Performers came from all over the world, including the US, Argentina, Cuba and Israel. 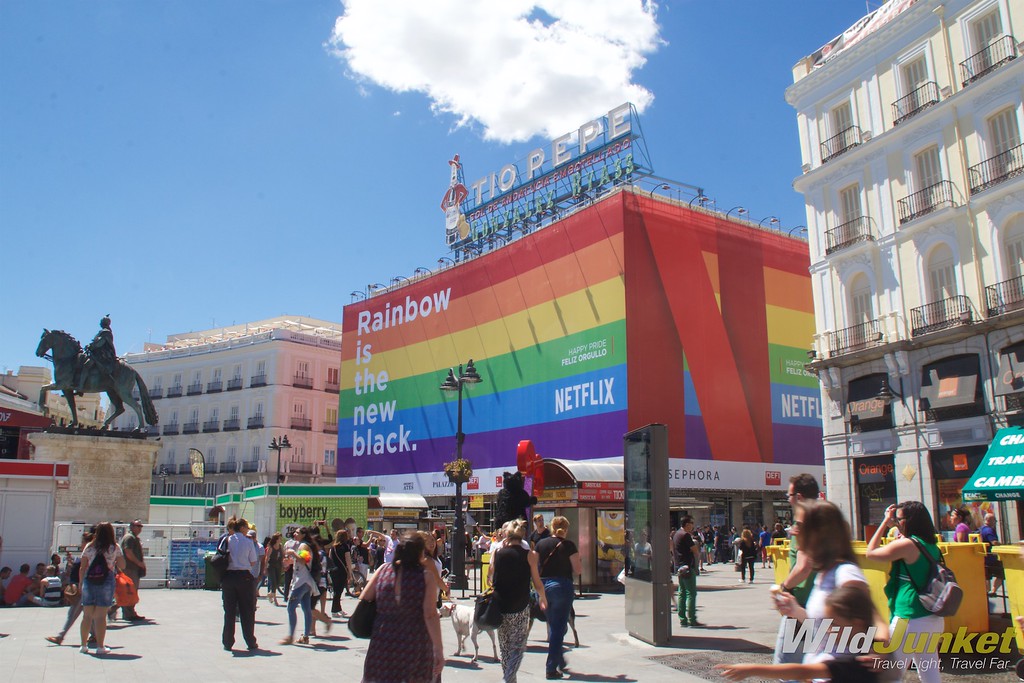 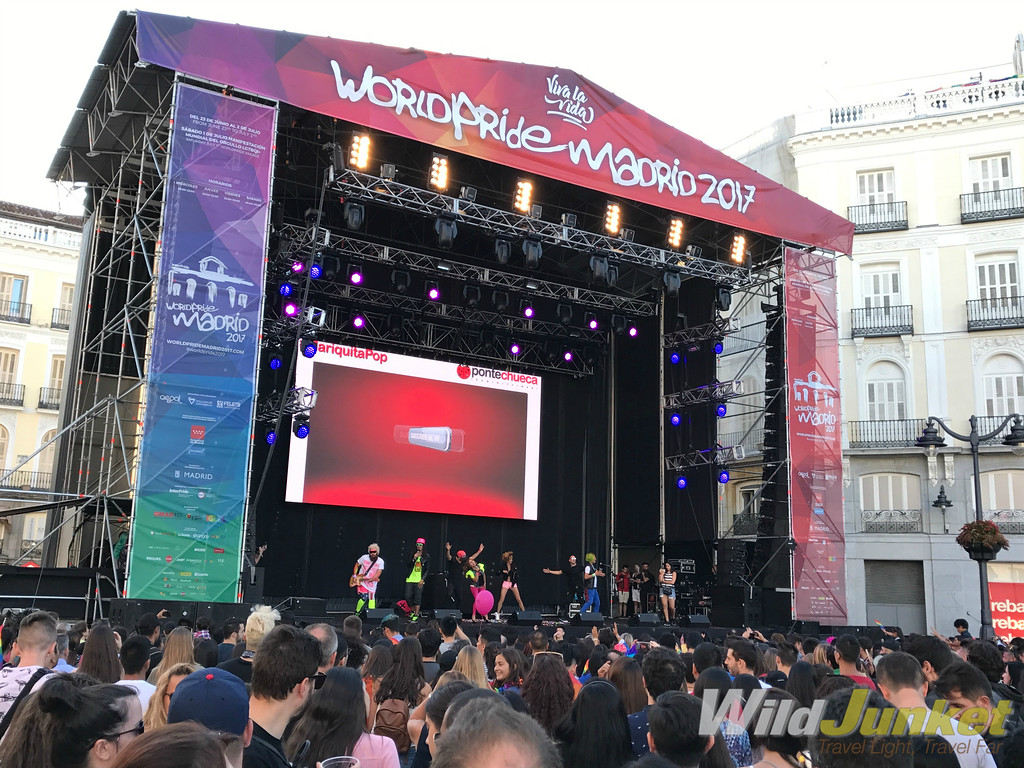 The highlight of the week was the WorldPride Parade on 1st July that took place along Paseo del Prado, one of the main arteries of Madrid, from 6pm to midnight. A convoy of more than 50 floats snaked through central Madrid amid a carnival atmosphere, marking the end of the WorldPride celebrations.

Politicians from across the political spectrum as well as representatives of the organising entities and institutions walked ahead of the parade, alongside the manifestation of the world’s greatest LGBT pride. After that, the parade started in full force, with floats packed to the brim with semi-naked dancers and techno music blasting through the speakers.

More than 1 million people were said to have taken part in the demonstration as well as the parade. 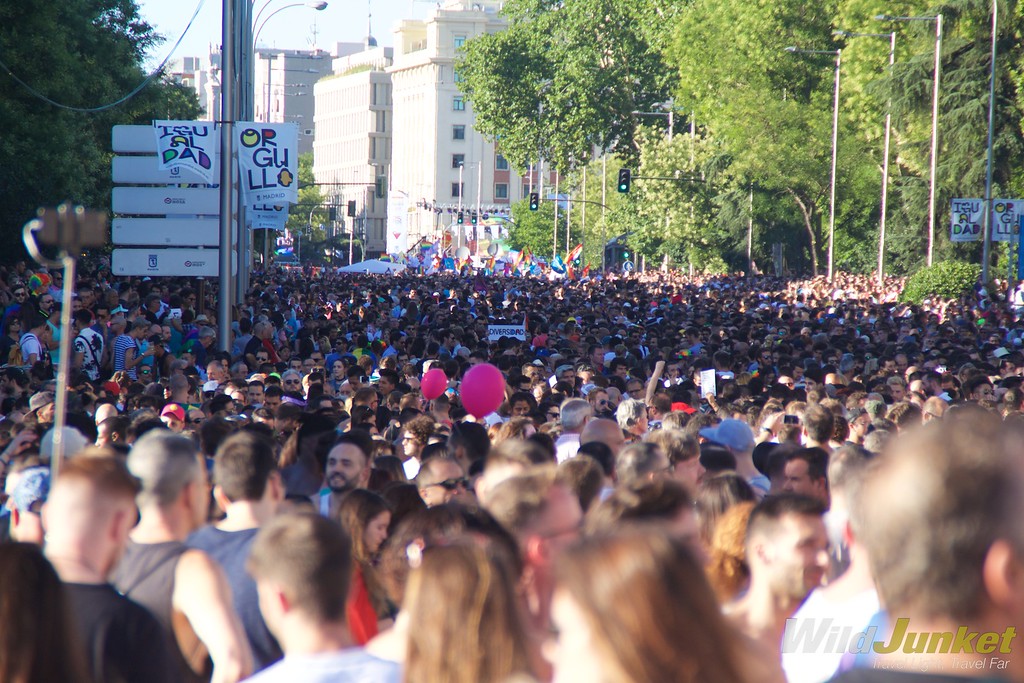 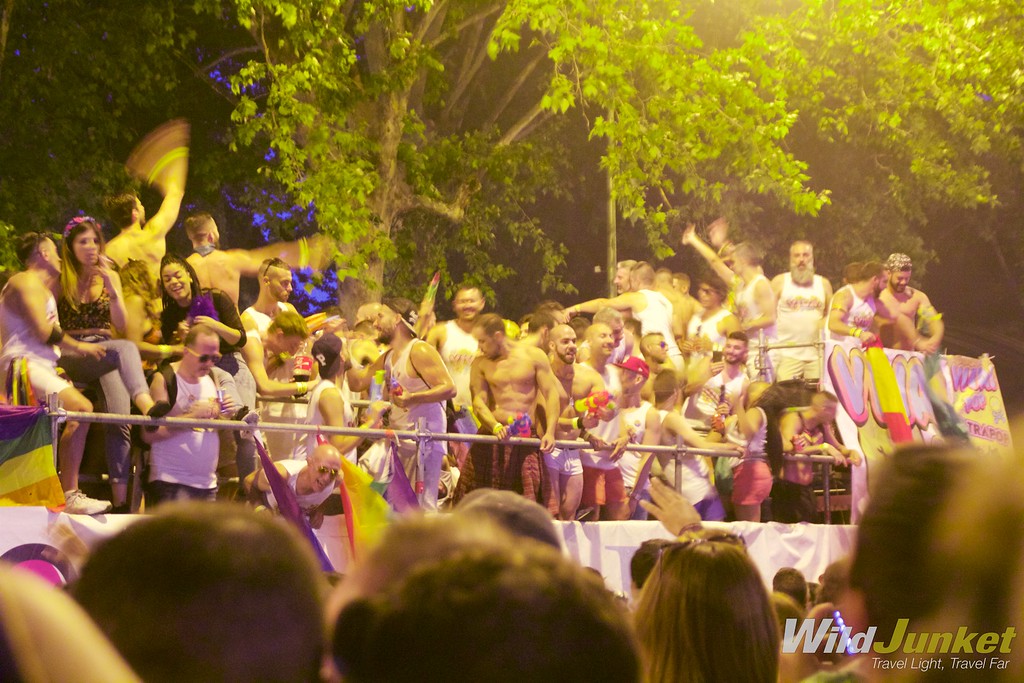 A Pride Village was also set up in Madrid Rio (Puente del Rey) just 15 minutes walk from the Chueca neighborhood. The beautiful park acted as an information and cultural exchange space for LGBT and Human Rights associations, collectives and companies from around the world. Stands for these groups were set up, as well as seminars, workshops and round tables.

Besides that, there were also plenty of music and dancer shows, as well as sports and games for the whole family at Chueca Kids. There was also a play space for the little ones and concerts and workshops of technology, architecture with LEGO pieces, art, face painting, and breakdance. My favourite part of the park was the market area with food trucks, craft stands and a book fair. 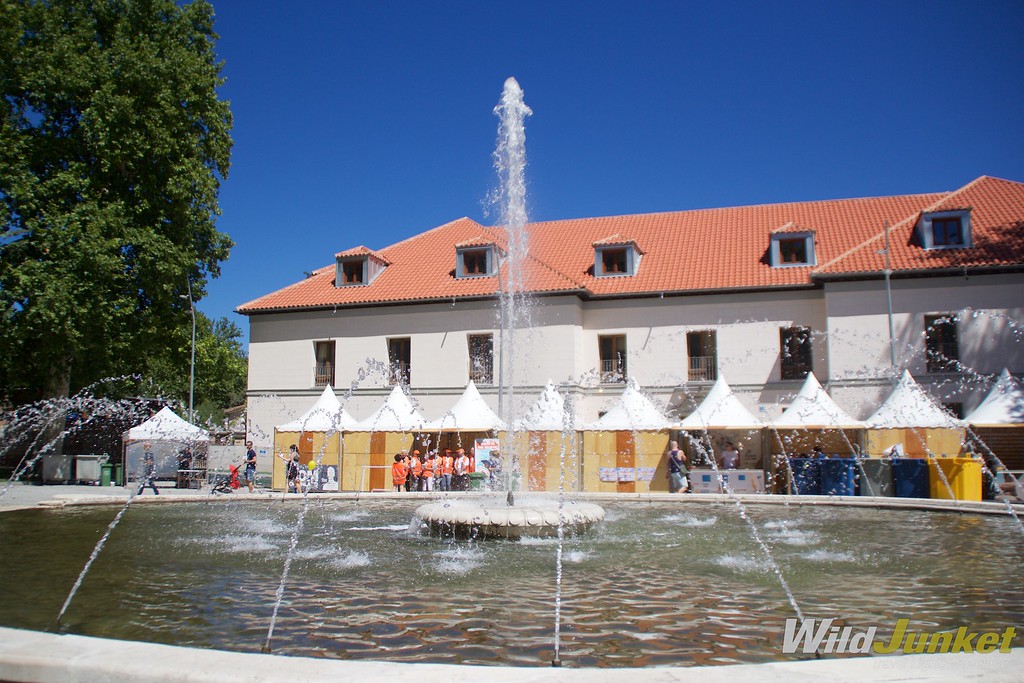 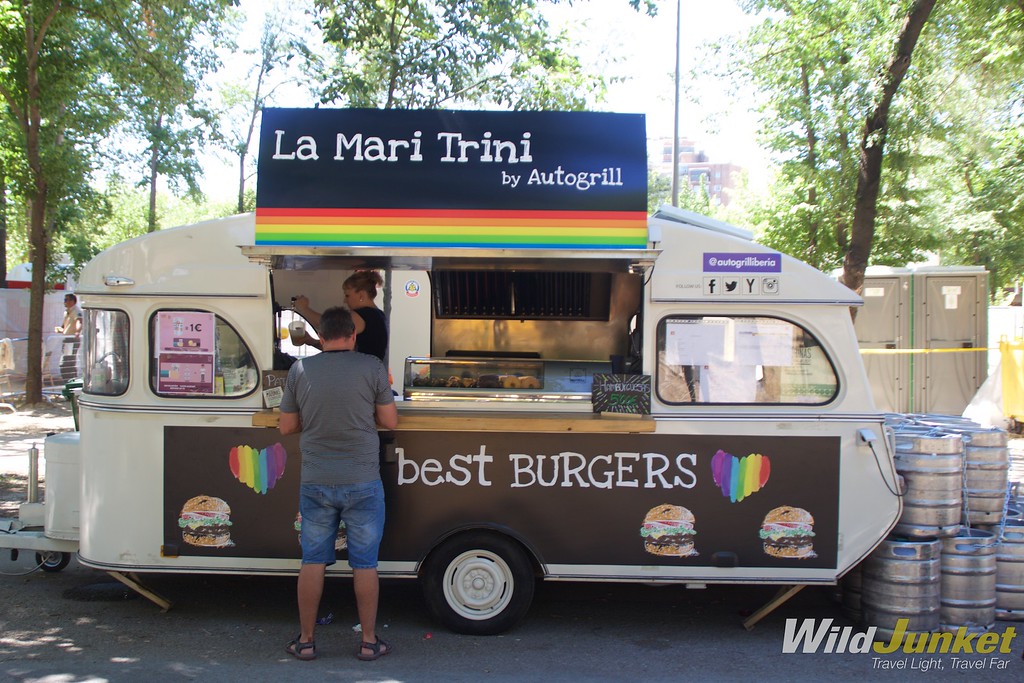 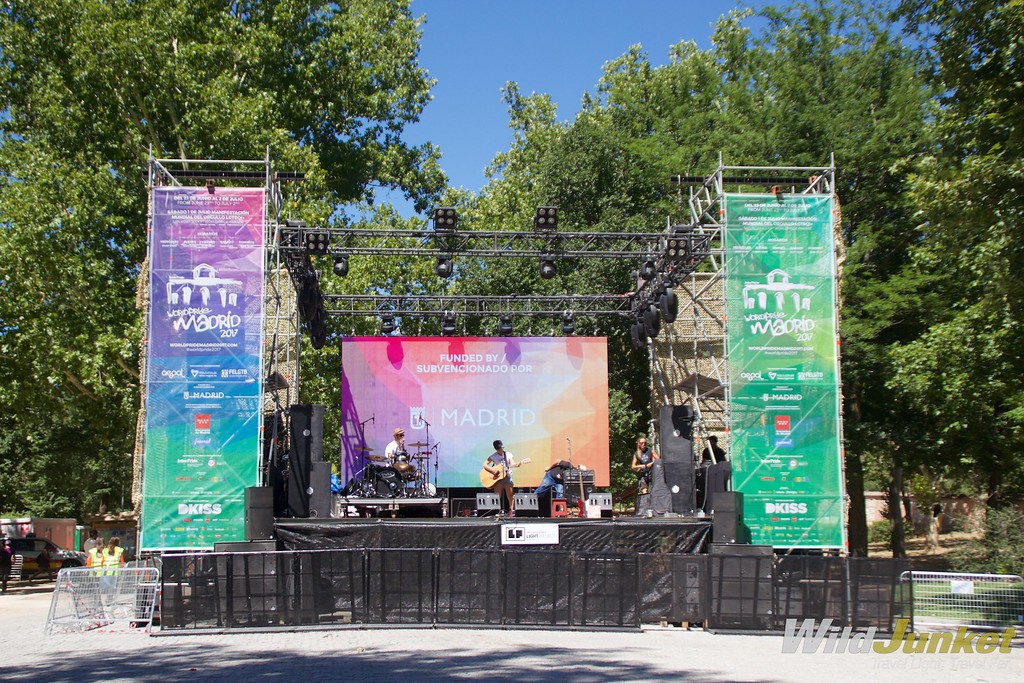 Are you heading to Madrid? There are plenty of things to do in Madrid, even if you’re not visiting during World Pride.