The Tradition of Reindeer Herding in Lapland

A story about our experience learning about reindeers in the Finnish Lapland, just one of the many things to do in Lapland in winter. 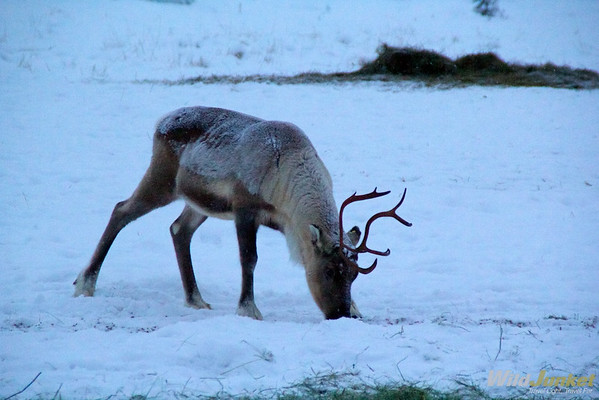 I’ve always imagined reindeers to have the power to whisk me into the sky, just like Santa Claus’ reindeer sleigh. But on our reindeer caravan, we are swaying in a slow, hypnotic rhythm. Not that I’m complaining – the pristine nature around us us in Luosto is absolutely gorgeous: powdery white snow cloaks whole area in white, while tall pine firs soar into the sky, with tiny water streams trickling into the valley.

After a short ride around the forest, we meet Sami reindeer herder Anssi Kiiskinen, one of the many reindeer herders in the Luosto region of the Finnish Lapland. He runs the reindeer farm Kopara with his family here in the backcountry of northern Finland.

For the uninitiated, Lapland is a magical region in the northern edges of Scandinavia. Streets here are blanketed in sparkling snow, pine tree forests sprawl across the region, and cosy wooden cabins dot the pristine landscape. Rovaniemi, the capital of the Finnish Lapland, is one of Europe’s most charming villages, with beautiful natural landscapes and a fairy-tale atmosphere. It’s also an excellent spot to experience Lapland at its best: you can go dog sledding, snowmobiling, and ice fishing.

Another unique thing about Lapland is the indigenous culture here. Sami people, also known as Lapps, are indigenous minority groups who have lived in Lapland since the beginning of time. While their numbers are dwindling, the Sami people are working hard to preserve their traditions. Today, many of them still make a living from reindeer herding. There are actually more reindeers than people in Lapland (over 200,000 reindeers and 180,000 people). The Finnish government maintains the reindeer population at 200,000 to make sure that the population continues to breed at a healthy rate.

The Role of Reindeers in the Sami Culture

All of these reindeers are semi-wild; they’re owned by someone but they are free to roam wherever they want. Reindeers tend to hang around in the same area all their lives, and usually only go as far as 60km. For these reindeer herders, selling the reindeers’ meat and skin is their main source of income.

The most important time of the year for them is in June, the start of the new year for reindeers as they all have calves during this period. Herders then go into the forests at the end of July to mark the calves. Around October and November, they head back into the forest again to count their reindeers and take the selected ones to the slaughter house.

A Way of Life

Back at the reindeer farm, we retreat into the warmth of a tipi. Under the gentle glow of the campfire, we chat with Anssi about his life as a reindeer herder. Spotting bright blond hair and blue eyes, Anssi is a well-educated man in his thirties. Unlike his peers, he has chosen to stay in Rovaniemi to continue his father’s reindeer herding business which has been running for over 200 years. But to Anssi, it’s not just about keeping family traditions.

“I love being out in the forest. It’s the only place where I can be free!”, says Anssi. “The best thing about my job is that everyday is different. Nature decides and makes all the rules.”

Even though reindeer herding doesn’t make him rich, Anssi is extremely happy with his life. “Freedom is more important to me than money.”

It’s obvious that reindeer herding is not just a job, but also a way of life. Sadly, reindeer herding is a dying trade in Finland. These days, the number of reindeer herders in Lapland is decreasing as more people are moving south in search of greener pastures. The presence of bears and wolverines is also lowering the reindeer population and making it an unprofitable business.

How long will reindeer herding continue? Nobody knows the answer but as long as people like Anssi keeps their passion burning, there will still be a future for the reindeers.

Anssi sharing with his story

Disclaimer: This trip was made possible by Lapland the North of Finland, but all opinions expressed are our own.