20 Photos of Iran that Will Surprise You

My Best Photos of Iran

I’ve just completed my Silk Road journey through Central Asia with Oasis Overland. Our trip started in Kyrgyzstan and we traveled through Kazakhstan, Uzbekistan, Turkmenistan, Iran and ended in Turkey. During this overland trip, we spent just under three weeks traversing through Iran, from the eastern corner to the western edge. It was the highlight of our trip and I hope these photos will show you what an amazing country it is.

Mention Iran and many think of burkha-clad women, burning flags and war. But these stereotypes can’t be further from the truth.

For those who are curious and open to new discoveries, Iran is packed full of surprises. It is a relatively safe country to visit and there’s so much to see and do in terms of historical and cultural sights: wander through the thousand-year-old ancient city of Persepolis, get lost in the mud-brick alleys of Yazd, contemplate in the beautiful turquoise-domed mosques that dot Esfahan, meet locals in the gardens surrounding Shiraz and pray with thousands of pilgrims at the country’s holiest city Mashad. The Islamic Republic has an extremely rich cultural heritage and its attractions can definitely rival those of world-famous tourist destinations. Best of all, you won’t find hordes of tourists here. It won’t take you long to question how such a charming country can be portrayed in such a negative light by the media.

Beyond the stereotypes is a country desperate to been seen for what it is, rather than what it is depicted to be. The Iranians are undoubtedly the friendliest people I’ve ever met in the world. Travelers will often find themselves getting invited to stranger’s homes, being treated to endless flow of tea from a shop vendor and getting a free ride from helpful drivers along the way. Locals tend to come up to you, ask where you’re from and genuinely want to get to know you. I’ve always agreed with the saying “it’s the people that makes a place”. It can’t be more true here in Iran where experiences with locals truly live the longest in your memory.

While traveling in Iran, the two topics that most find impossible to escape are religion and politics. These are complex issues that aren’t black or white, but as I discovered, if you’re respectful of their opinions, the Iranians will be more than happy to discuss them with you. It’s also important to note that the government’s views may not be in line with what average Iranians think. Regardless, if you do choose to travel here, a journey to Iran will certainly change your perspective of the country, and perhaps, the world. The Zagros Mountains in western Iran provided some of the most scenic drives during our overland trip. We wound our way through each hairpin bend to find spectacular views waiting for us around the corner.

In the abandoned mud-brick city of Kharanaq, we got lost amidst the alleys and crumbling paths that overlooked this beautiful valley. Our short stay in the desert was particularly memorable thanks to the oasis town of Gahmeh that not only provided us with comfort but also an interesting homestay.

The roads in Iran were surprisingly smooth and well-paved. We criss-crossed the country from the northeastern corner to the western reaches, with amazing views like these.

Right at the outskirts of Shiraz, we stumbled upon the spectacular rock tomb of Naqsh-e-Rostam. The ragged cliffs that the tombs are carved into remind me of those in Wadi Rum, Jordan. Dating back to almost 2,000 years ago, these ancient rock tombs still remain clearly etched within the cliffs. I was extremely impressed to find such well-preserved ancient ruins in a place where few people know about. The ancient Archaemid city of Persepolis is one of the oldest in the world, at more than 2,500 years old. 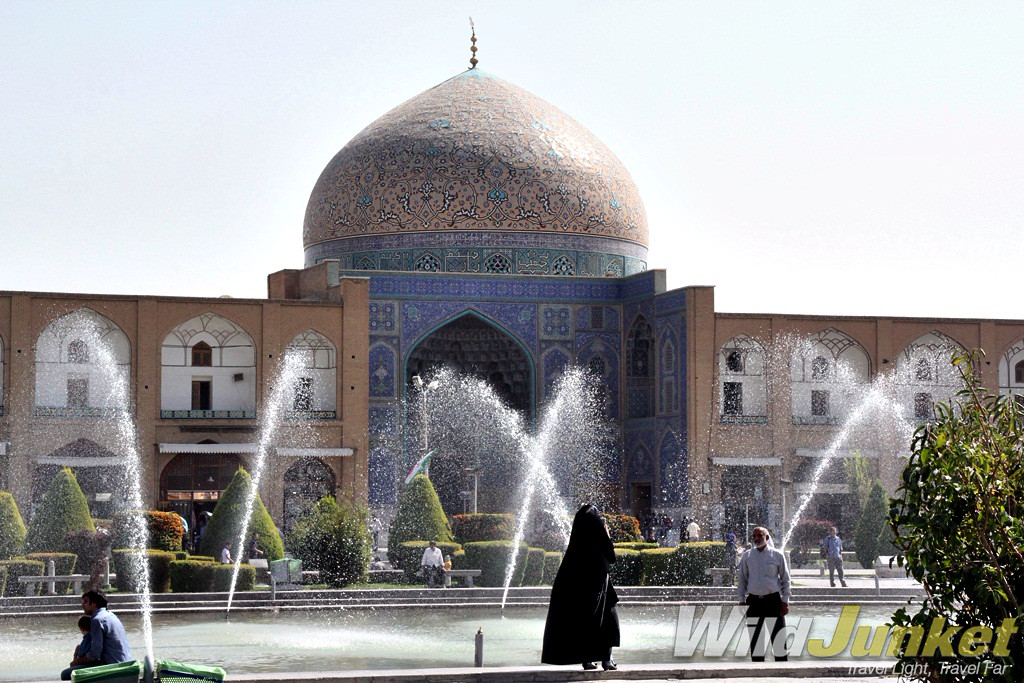 Back in the days when Persia was a powerful empire in the world, lots of magnificent buildings were constructed all over the country. Today, they continue to be an important part of the cityscape. The Imam Square in Esfahan pictured above is known as the world’s second biggest square (after the Tiananmen Square in Beijing) and is flanked by two mosques and one palace. Imam Mosque in Esfahan is definitely one of the finest displays of Persian architecture with immaculate carvings and beautiful turquoise tiles framing its main entrance.

The interior of Persian buildings is often just as impressive. This photo shows the interior of the Royal Palace in Shiraz, characterized by arches, spiraled columns and carvings.

Shrines are where many Islamic saints (known as ‘imam’ and their families are buried and mourned for even centuries after they have passed. It’s extremely moving to see how devout Iranians are and how emotional they get in these shrines. Inside the Jameh Mosque in Yazd, the high domed ceilings and immaculate tilework make it one of the most impressive buildings we saw in Iran.

Amir Chakhmagh in is an iconic landmark in Yazd and while it’s now nothing more than a gate (the rest of the building is gone), the unique architecture still makes it quite an impressive sight. The mud-brick alleys of Yazd form a labyrinth of sorts in the old town – this one in particular has been restored by the government but most of the town still retains a old-world atmosphere.

Bazaars are an important part of Iranian life. They trace their roots back to the Silk Road days and even until today, Iranians are still known to be excellent traders and businessmen. Spices are of course a common sight in the bazaars.

Shiraz is known for its poets and their burial grounds. In Hafez’s mausoleum, we found several plaques carved with his Farsi poetry.

We happened to arrive in Esfahan during a religious festival held by the main bridge of the city. Hundreds, perhaps thousands, of devout pilgrims poured into the city and mourned unanimously. I was stunned to see so many people cloaked in black chadors weeping for their saints. There were even men with Qoran in hand, openly sobbing.

The Iranians are exceptionally warm and friendly, with many people stopping to strike up a conversation with us seeing that we’re foreigners. I met this bunch of students at the Golestan Palace in Tehran and they were all excited to practice their English with me. One of the highlights of our Iran trip was being invited to our local guide’s home for dinner. Nosrad’s gracious family prepared an amazing home-cooked meal and warmly welcomed us into their home. Nosrad introduced us to all his family members and everyone of them made an effort to speak to us and get to know us. This was definitely an experience that would live the longest in my memory.

Everywhere we went, people were curious about why we were in Iran (clearly there aren’t many tourists) and how we liked Iran. This kebab shopowner (on the right) was especially keen to make sure we had a good meal, and a good time in Iran.

Disclaimer: I traveled to Iran as part of  an overlanding trip with Oasis Overland. Over a period of two months, our group of travelers journeyed through Central Asia on an overland truck that brought us through six countries from Kyrgyzstan to Turkey, camping in deserts and mountains, and digging up the mystery behind the Silk Road. Although the company gave me a discount for my trip, all opinions expressed above are my own.